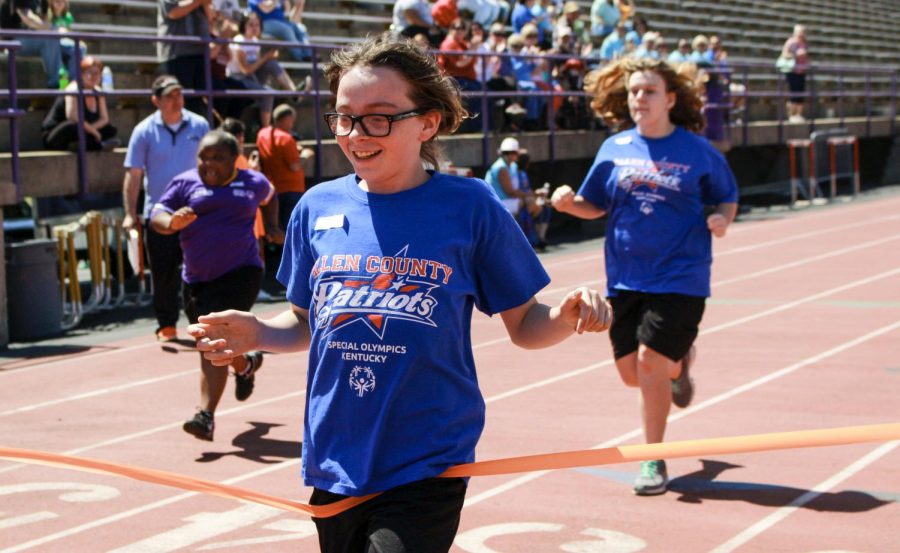 Makayla Blankenship 12, from Scottsville, Kentucky runs in the 50 meter dash at the Special Olympics hosted at Bowling Green High School, on Saturday April,16. Blankenship came in 1st place in her division of the run. MHARI SHAW/HERALD

Cheered on by fans and volunteers, more than 250 athletes and coaches paraded across Bowling Green High School’s track on Saturday morning to begin the annual Special Olympics Area 5 Spring Games.

“I love seeing the athletes’ faces when they compete,” Cameron Levis, instructor for the Special Populations program with Bowling Green Parks and Recreation, said.

“They start to form those bonds just through volunteering, and they find that even though [the athletes] have disabilities, they’re just like anyone else they know,” he said.

Glasgow freshman Arieal Smith volunteered at Saturday’s games handing out awards to the participants and cheering them on during the events.

“Seeing their faces after they competed just makes my heart happy,” Smith said. Although Saturday was her first time volunteering at Special Olympics, Smith said she will definitely come back next year.

“It’s a wonderful cause, and it’s been an amazing experience,” Smith said. “Everyone should come out.”

Levis told the volunteers their most important job of the day was cheering for the athletes.

“Being a fan is the best way to serve,” Levis said. “It is all about supporting these guys and girls in their competition.”

He said he originally got involved with the program because it gave him the opportunity to travel, which he said he loves to do.

“It’s been fun meeting a lot of people at all of the events and making friends,” Kirby said.

Although softball is his favorite event to compete in, Kirby said he loves participating in and watching any and all sporting events.

“Anything that’s got a little action in it, I like to go see it,” Kirby said.

James Jordan, three-year member of Bowling Green Special Olympics, said he appreciates the respectful competition at the games every year.

“We just leave it all out there on the track,” Jordan said.

Jordan participated in three running events during the day and placed first in the 1500-meter run.

In addition to the standard track and field events, the Spring Games included developmental events, such as rolling a tennis ball, to involve individuals who could not run or throw.

The Bowling Green Special Olympics Head Coach Amanda Day said she loves track and field because anyone can participate no matter their level of ability.

Day said she focuses on the word ability rather than disability when she works with her team.

“These guys have amazing abilities,” Day said. “They don’t care who you are. They’ll hug you; they’ll love you. These guys love everybody.”

Day said she encourages people to come out and watch the athletes share each other’s joy and not just celebrate their own victories.

“It’s just an amazing program,” Day said. “The connections that you make, the people that you meet. You get so much out of this.”