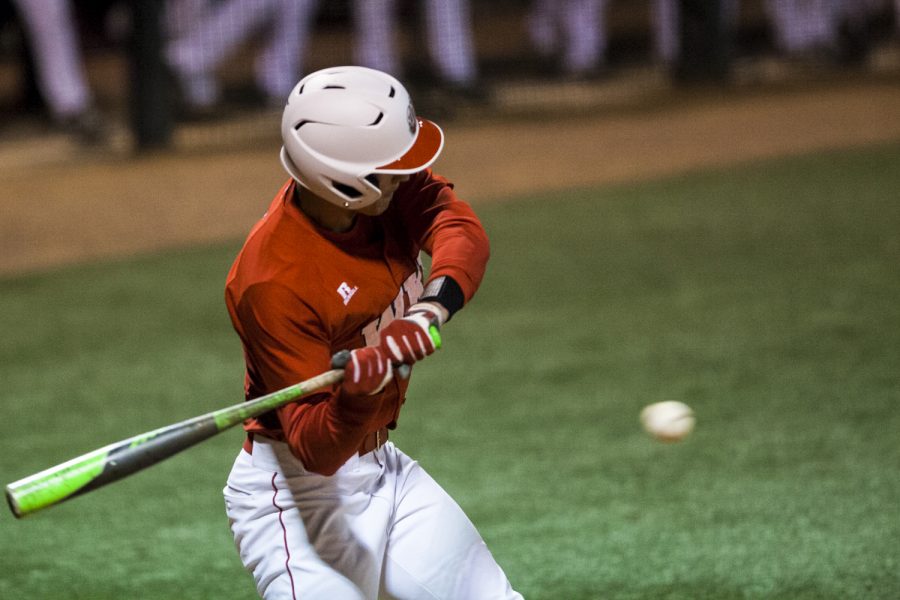 Sophomore outfielder Kaleb Duckworth (13) tries to hit the ball during the Hilltoppers’ 17-0 loss to the University of Louisville Tuesday, March 29, at Nick Denes Field. Duckworth was at base twice with one hit and struck out once. Shaban Athuman/HERALD

After a stellar career at nearby Henderson County High School, sophomore outfielder Kaleb Duckworth looks to have similar success at WKU.

As a senior in high school, Duckworth finished with a .447 batting average, 40 runs scored, stole 38 bases and had 35 RBIs. His performance earned him All-State honors for the second straight season and also earned him Mr. Baseball in the state of Kentucky along with the Gatorade Player of the Year award in the state.

However, Duckworth already had his mind made up before his senior campaign. Duckworth committed to continue his baseball career at WKU after his junior season.

“Western Kentucky was the first school that contacted me,” Duckworth said. “I really liked the coaches and I knew I would get the chance to play and contribute right away.”

And contribute right away he did.

As a true freshman, Duckworth was the Hilltopper’s opening day starter in left field and only committed one error defensively in the outfield over the entire season.

In just his second game of his career, Duckworth got his first career hit: a home run against Evansville.  The rookie also batted .295 with five home runs overall on the year, including a huge three-run homer in a win against the University of Kentucky.

“Overall, he’s a quiet dude and takes care of business,” junior outfielder Paul Murray said about Duckworth. “Sometimes he’ll make a comment or two in the locker room, but for the most part he lets his play do the talking. He’s a real grinder.

Duckworth’s freshman performance put him well in contention for Conference-USA rookie of the year. However, a shoulder injury kept him out of the lineup for the final month of the season. The Hilltoppers finished the season 24-28 (10-19 C-USA) and missed the C-USA tournament.

“The injury definitely impacted me a lot,” Duckworth said about his injury. “I have had to put a ton of work in rehab to get my shoulder back to where it needed to be. You put in all that work for your sport over time and you don’t want to see it go to waste.”

So far in 2016, Duckworth has proven the shoulder injury hasn’t held him back.

Through 28 games this season, Duckworth currently leads the Hilltoppers with three home runs. He’s also second on the team in hits (40) and batting average (.381), trailing only senior infielder Danny Hudzina who is currently tied for first in the nation in hits (53).

“One of the things that Duck does a great job of is that he’s willing to learn,” Head Coach John Pawlowski said about the sophomore. “That’s the biggest attribute he has. He’s big, he’s strong, and he’s physical. He just needs to continue to play at a high level. I think hitting behind Danny Hudzina helps him in so many ways. He learns from watching Danny hit.”

WKU is currently 17-11 overall on the season, but the Henderson County native wants the program to strive for top honors this season.

“First of all, we have to make the tournament,” Duckworth said about his team’s goals. “Last year we didn’t make it and that was disappointing. Everyone on this team wants to play postseason ball and that’s our first goal.”

After the 2016 season is over, Duckworth will travel to Cape Cod, Mass., to play in the Cape Cod Baseball League.

The CCBL is a collegiate summer baseball league that has accompanied many future MLB players during their college years. The league is also provided financial support by the MLB.

“I think physically he has the skill set,” Pawlowski said about the possibility of Duckworth playing at the next level. “He’s a young hitter learning how to play at a high level. Next year with Danny being gone, all of a sudden Duck becomes the guy. Danny has handled that well and Duck will have to handle that next year. He’s going to be one of those guys that teams are going to mark and circle before each game.”

The Hilltoppers who are fourth in the conference standings host Louisiana Tech, who is currently sixth in Conference USA, for a three game series this weekend.

With the season passing its halfway point, the Hilltoppers are gearing up for conference play deep in their schedule. For Duckworth, he will continue to stay the course and do whatever is necessary for the team.

“I just want to help this team win,” Duckworth said. “That’s it.”