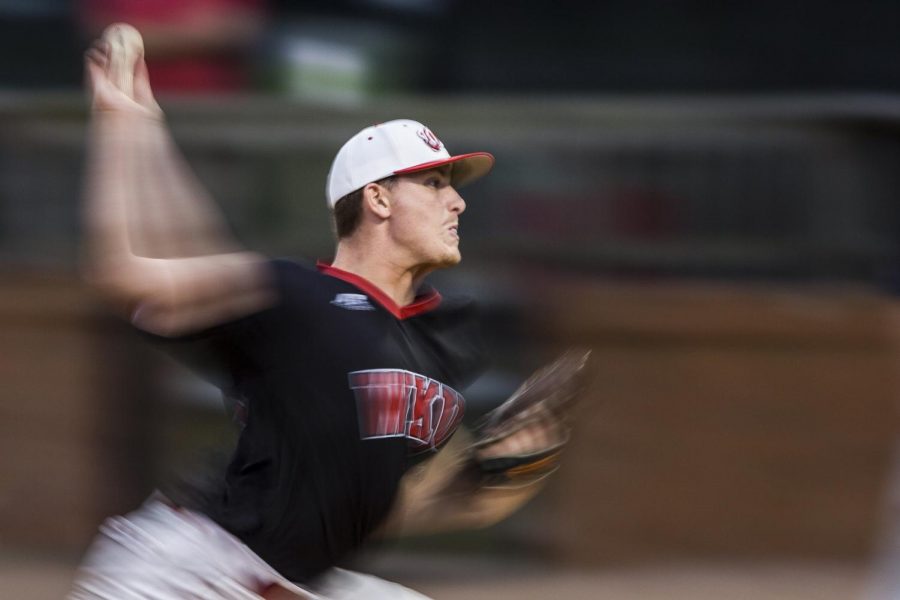 After losing six games in a row, the WKU baseball team needed to catch a break to get back on the winning side.

The Hilltoppers got exactly that when they hosted Belmont University at Nick Denes Field Tuesday night.

With the game tied 2-2 in the bottom of the tenth inning, junior outfielder Paul Murray hit a line drive down the third base line. The ball was handled, but the throw to first was high and allowed freshman infielder Steven DiPuglia to race home for the game’s deciding run, giving the Hilltoppers a 3-2 victory.

“I think this win was really important for our club,” Head Coach John Pawlowski said. “We’ve been playing tough, hard-nose baseball. We’ve just struggled offensively lately. We’ve pitched well, we just haven’t been able to come up with some big hits. It wasn’t the way you script, but we found a way to win.”

The Gilbert, Arizona freshman smacked a single through the left side to score sophomore first basemen Harrison Scanlon. The RBI single was the first of Pollock’s career and gave the Hilltoppers an early 1-0 lead.

“I just tell myself it’s just another game. It’s just another at bat,” Pollock said. “It’s exactly what I did in high school, just on a bigger stage. Getting that first big play from the plate feels great.”

Following the opening run, another true freshman brought in the next run for the Hilltoppers. Freshman infielder Steven DiPuglia hit a single to the infield to bring home redshirt junior infielder Leiff Clarkson to make the score 2-0 after two innings.

“I haven’t been swinging the bat real well lately, so that was big for my confidence,” DiPuglia said about his RBI single. “It’s something you just keep fighting through. Every pitch, every at bat, you fight through it. Thats how you find ways to win.”

After the two teams traded scoreless innings, the Bruins finally got on the board in the top of the fourth. Belmont’s Brennan Washington hit a solo home run to left field to cut the Hilltopper lead to 2-1.

After the home run, junior pitchers Sam Higgs and Kevin Elder kept the Bruins scoreless all the way until the top of the eighth inning.

After Washington was hit with a pitch, a Belmont sacrifice bunt and a ground out allowed Washington to advance to third base. Redshirt junior pitcher Jackson Sowell came in to replace Elder hoping to finish things off once again.

However, Belmont’s Kyle Conger singled to right field to bring Washington home to tie the game.

Sowell struck out the final Bruin in the eighth inning and retired three straight batters in the top of the ninth, but the Hilltoppers failed to score the go ahead run in regulation.

Sowell retired three out of four Bruin batters in the top of the ninth, setting up the Hilltoppers to bring in the game-winning run.

Redshirt junior outfielder Zach Janes advanced DiPuglia to second with a second sacrifice bunt. With one out in the bottom of the tenth inning, Murray’s line drive to third base was handled but overthrown to first base, allowing DiPuglia to sprint home for the winning run.

“We were due for some good karma,” Pawlowski said. “We had some real close games at Rice and last weekend against Louisiana Tech. We’ve had some things you kind of scratch your head about. I’m glad to see us get this win in such a tough ball game.”

The win improves the Hilltoppers to 19-17 (6-9 Conference USA). The Hilltoppers will host the University of Texas San Antonio this weekend in a three game C-USA series. The Roadrunners are 14-21 (5-10 C-USA) and are currently No. 13 out of 14 teams in the Conference-USA standings.

“This was a big team win. It was huge,” DiPuglia said. “Coming back from getting swept by Rice was tough for us. For us to get this walk off win is a confidence booster. It was an ugly win, but it’s what we need going forward.”