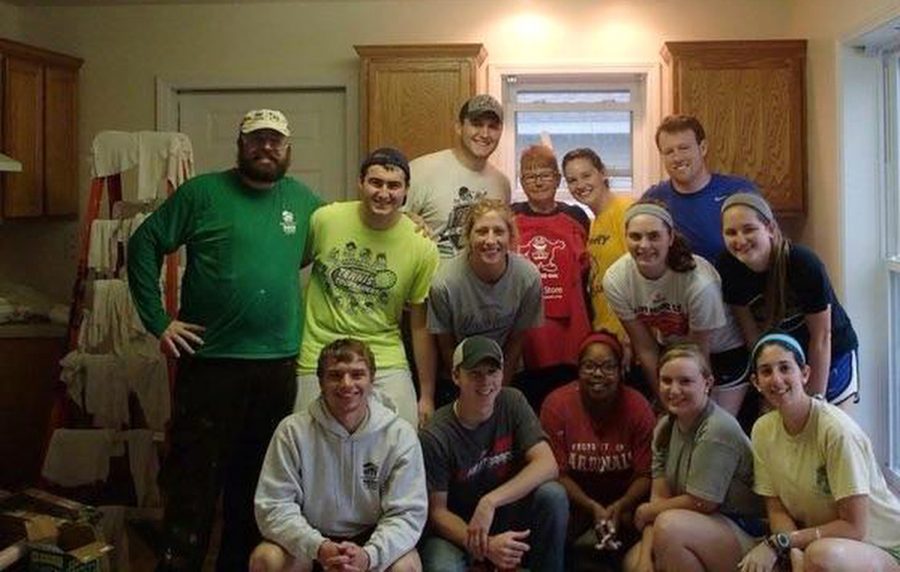 WKU students spent their spring break working on houses for Habitat for Humanity in Mobile, Al., Friday March 11. The team spent time renovating the house to be put on the market. Photo Submitted by Theresa Ford

While some students were slathering on aloe vera and posting sunkissed photos on social media, one WKU group was returning with memories of building both relationships and houses during spring break.

Students and staff from WKU’s Habitat for Humanity chapter paired with WKU’s St. Thomas Aquinas Catholic Campus Center to participate in the Collegiate Challenge, an alternative break program through Habitat for Humanity in which groups of college-aged students 16 and older and adult chaperones work on housing in another community.

Louisville junior Theresa Ford, a student team leader who organized the trip, said the group of 11 students, one faculty member and one staff member left early on March 6 to arrive in Mobile, Alabama, for five days of construction and renovation work.

For the first four days, the group worked on one house by doing projects like putting up roofing, windows and siding as well as building structures like a safe house and a soffit. The area was hit with rain on Friday, so they went to a foreclosure that needed preparation for sale to rip up carpet and paint.

The program provided the group a six-bedroom volunteer home to reside in as well as lunch on the job sites and the necessary equipment and proper instruction for completing the tasks.

Staff participant Imari Hazelwood, academic counselor for Student Support Services and campus minister at the Catholic Campus Center, said the group learned new things during the day and, during free time, connected with local ministries by attending Mass and a fish fry.

“I feel like … we always have our hand out to like reach out for something to be given to us, but really we need to start doing the reaching and giving back to other people,” Hazelwood said.

Ford enjoyed learning ways to use different tools while becoming close with the small group of students and faculty.

“I only knew like probably two or three people before this trip, and now I’d say we’re all like best friends,” Ford said.

As a campus minister, Hazelwood endeavors to help students get involved in volunteering.

“The main thing is … being unselfish and making sure that you understand that the world needs people like us to go and help build houses or serve at the homeless shelters or … something like that that people would need,” Hazelwood said. “We’re the ones that would have to go out and do the service.”

Ford joined the organization’s WKU chapter about a year ago after hearing other people’s positive experiences with volunteer work in the community. Participating in the Collegiate Challenge came highly recommended; Ford was told the trip would be life-changing.

“It really was,” Ford said. “It’s just so much different and eye-opening, and it’s just … it’s really neat.”

But what about missing out on a traditional spring break?

“Oh my gosh, this is so much better,” Ford said. “It was amazing. I don’t regret it for a second.”