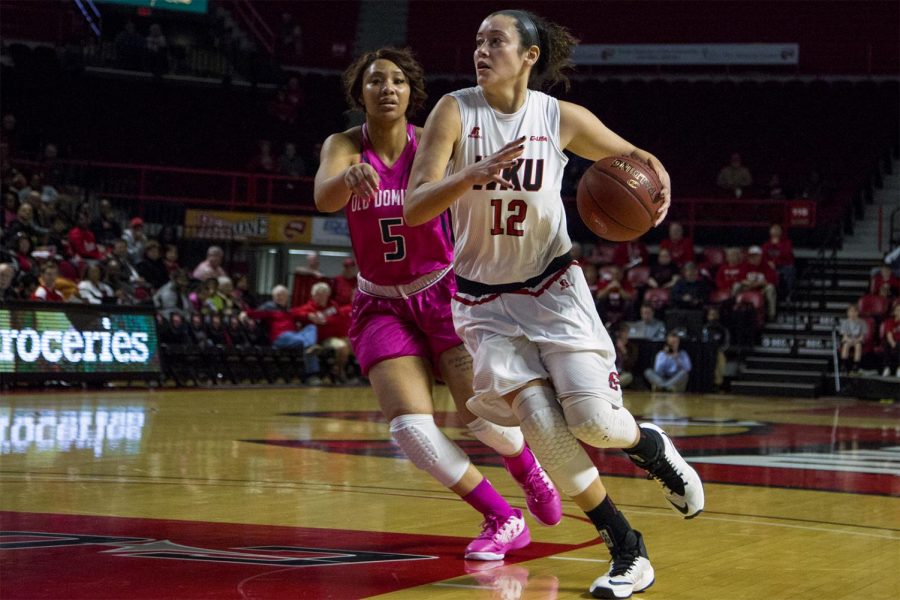 The laundry list of achievements from the 2014-2015 WKU women’s basketball season is very long: 30 wins, a regular season and conference tournament championship, an NCAA Tournament bid, the C-USA Player of the Year, the C-USA Defensive Player of the Year, and two of the top 11 all-time leading Lady Topper scorers, both of whom accounted for nearly 45 percent of the team’s scoring.

Head Coach Michelle Clark-Heard knew that following up one of the most decorated seasons in program history would be tough.

This year’s version of the Lady Toppers finished at 27-7 overall and 15-3 in C-USA play, advancing to the quarterfinals of the WNIT after a stunning first-round loss to Marshall in the C-USA tournament.

But after stumbling in a 74-60 season-opening loss at Ball State, the Lady Toppers came back home to Diddle Arena and amassed a 14-1 record on the season while they also knocked off the 16th ranked Louisville Cardinals 71-69.

Senior guard Micah Jones’ season ended in the second quarter of the game against Louisville when she went down with a severe knee injury.

“The one who took it the hardest was Kendall Noble because [Micah’s] her best friend,” Clark-Heard said following the win over Louisville. “And then [Kendall] comes out and does what she does in the second half, so it shows a lot about her as an individual and a lot about this team.”

Much like last season’s team, the 2016 Lady Toppers featured several individual players who made a collective whole superior to the sum of its parts.

Noble was the player responsible for the C-USA Defensive Player of the Year award for the 2015 team. The redshirt junior guard returned in 2016 and reclaimed the award, along with the C-USA Player of the Year Award and the first two triple-doubles in the storied history of the WKU women’s program.

“Kendall is Kendall,” Clark-Heard said after a loss to Marshall in the C-USA Tournament. “She always seems to find a way to help put us in a position to win and that’s what we always talk about. I’m just really proud of her.”

Noble was key to WKU this season as she averaged 18.1 points, 7.7 rebounds and 5.6 assists per outing on the season.

Sophomore guard Tashia Brown averaged 17.5 points per game, nine points higher than from a season ago, and was able make plays when her team needed her most.

Her 21 first-half points were the only things that kept WKU in a tough home loss against the University of Texas, El Paso in early February.

Sophomore forward Ivy Brown took a big step forward from a freshman season in which she spelled the fourth all-time leading scorer in program history in Chastity Gooch for just 11.9 minutes per game. This season, she averaged 30.5 minutes per game in a starting role.

Unlike last season, Clark-Heard and the 2016-2017 team will have completely different expectations.

With senior forward Jalynn McClain being the only non-returner for next season, Clark-Heard is left with an abundance of talent to build upon next year. Jones is expected to receive a medical redshirt, and role players Kayla Smith, Dee Givens, Taylor Brown and Sidnee Bopp will all be back.

University of Kentucky transfers Jaycee Coe and Kyvin Goodin-Rogers will be eligible to play next season and make an immediate impact.

On top of that, the all-time leading scorer in Kentucky high school history, Whitney Creech, will be at WKU next season joined by in-state signees Malaka Frank and Sarah Price.

WKU reeling off 14 consecutive wins in between two losses during the months of December and January, and freshman guard Bopp’s 3-pointer in the WNIT with .9 seconds left were high points from a team that was expected to be in rebuilding mode.

The 66-63 upset loss to Marshall dampened halted any chances of a third consecutive NCAA Tournament bid, but Noble’s historic triple-double in that game was representative of the surprises this team brought to fans.

“A loss is always tough, but I mean we’re 24-6, and this is supposed to be a rebuilding year for us. I’m just super proud of that group.”