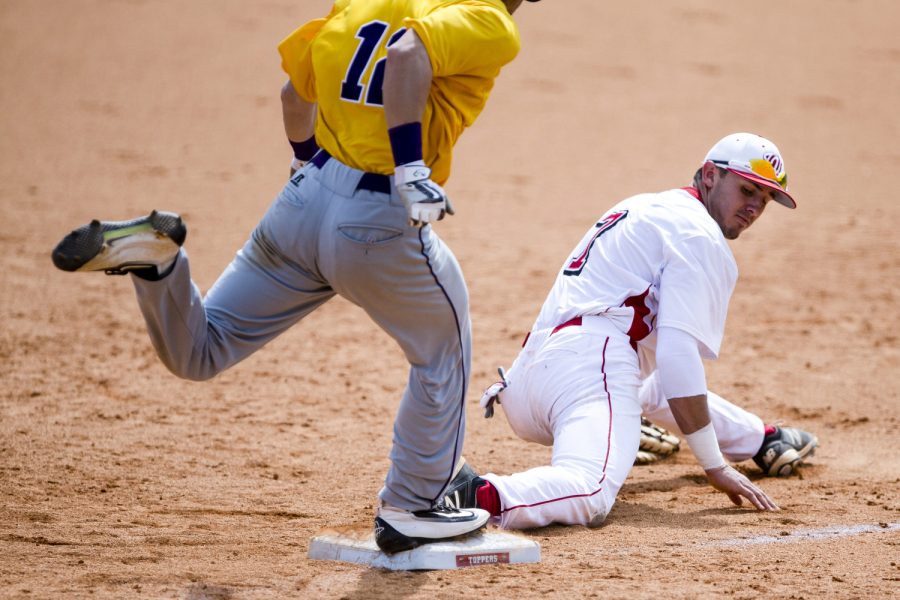 Junior infielder Thomas Peter (7) stretches to keep his foot on the bag to get UA freshman Kevin Donati (12) out at first base during the game on Saturday. The Hilltoppers baseball team takes on the University of Albany Danes at Nick Denes Field in Bowling Green. Mar. 12, 2016. WKU beat UA, 12 - 2. Matt Lunsford/Herald

The WKU baseball team hosted Albany this past weekend for a three-game series. On Friday, the Hilltoppers won the first game by a score of 5-3.

The Toppers and Great Danes split a doubleheader on Saturday as WKU won the opening game 12-2 before Albany won the final game 7-4.

The series victory improves the Toppers to 10-5 on the season and drops the Great Danes to 5-8.

“Our team is a disappointed group,” Head Coach John Pawlowski said about the team not getting the sweep. “They know how hard they’ve worked to find success. We definitely didn’t find success in game three. We have to keep it in perspective; we won two out of three. That’s a chance to move forward.”

The opening matchup started out as a pitching duel as senior pitcher Austin King and Albany’s Stephen Woods kept the game scoreless for five innings.

In the top of the sixth inning, Albany blew the game open. The Great Danes scored three runs to jump out to a 3-0 lead.

However, two wild pitches allowed the Toppers to cut the lead to 3-2 after six innings. Junior pitcher Sam Higgs replaced King in the sixth inning.

Soon after, graduate senior catcher Ty Downing doubled to right centerfield to score Murray and sophomore outfielder Kaleb Duckworth to give the Toppers a 5-3 lead.

Higgs pitched the rest of the game and didn’t allow another Great Dane run, giving himself and the Toppers a 5-3 victory. The win improved Higgs to 2-1 on the season.

In the second game, the Toppers dominated from the plate and took no time getting on the board.

In the bottom of the first inning, Duckworth singled through the left side to score Hudzina from third base. After Duckworth stole third base, a wild pitch allowed the former Kentucky Mr. Baseball winner to come home to make the score 2-0 after one inning.

Albany answered with a run in the second inning to cut the early lead to 2-1. After Hudzina and sophomore outfielder Grant Malott scored in the third and fourth innings to extend the lead to 4-1, the Toppers began to pull away.

Freshman infielder Steven DiPuglia’s bunt sacrificed Malott at second base but brought home Murray for another Topper run. Murray then had the game’s biggest play from the plate.

The San Bruno, California, native’s double to left field scored sophomore infielder Steven Kraft, DiPuglia and Downing to extend the lead to 9-1 and give the Toppers an eight-run cushion.

Junior pitcher Ryan Thurston pitched just over five innings and got the win to improve to 2-0 on the season. Freshman pitcher Micah Kaczor came in to relieve and didn’t give up a single run in three innings as the Toppers cruised to a 12-2 victory.

“I felt like we’ve thrown the ball well,” Pawlowski said. “One thing we pride ourselves with all the time is going out there with our pitchers and giving ourselves a chance to win. We’ve done that for the most part early in the season. We’re going to continue to do that if we want to have success down the road.”

The two teams played one final game Saturday afternoon to cap the three-game series. The Toppers got on the board early after Hudzina sacrificed himself to allow Kraft to score the game’s opening run.

However, the Great Danes scored seven unanswered runs to take a 7-1 lead into the bottom of the ninth inning. The Toppers tried to rally as DiPuglia, Malott and Peter scored to cut the lead to three runs. The comeback stopped there as the Great Danes took the final game by a final score of 7-4.

“One thing I know about this group is that we fight hard,” Pawlowski said about the ninth-inning rally. “These guys really give us everything as a coaching staff day in and day out. They’ve worked really hard. We just came up a little short in the ninth inning.”

Senior pitcher Josh Bartley pitched about three innings and suffered his first loss of the season to drop to 2-1 on the mound. Kenny McLean pitched six innings for Albany and got the victory for the Great Danes.

The Toppers improve to 10-5 overall on the year and travel to Lexington on Tuesday to take on the University of Kentucky. Last season, the Toppers defeated the Wildcats 12-3 at Bowling Green Ballpark.