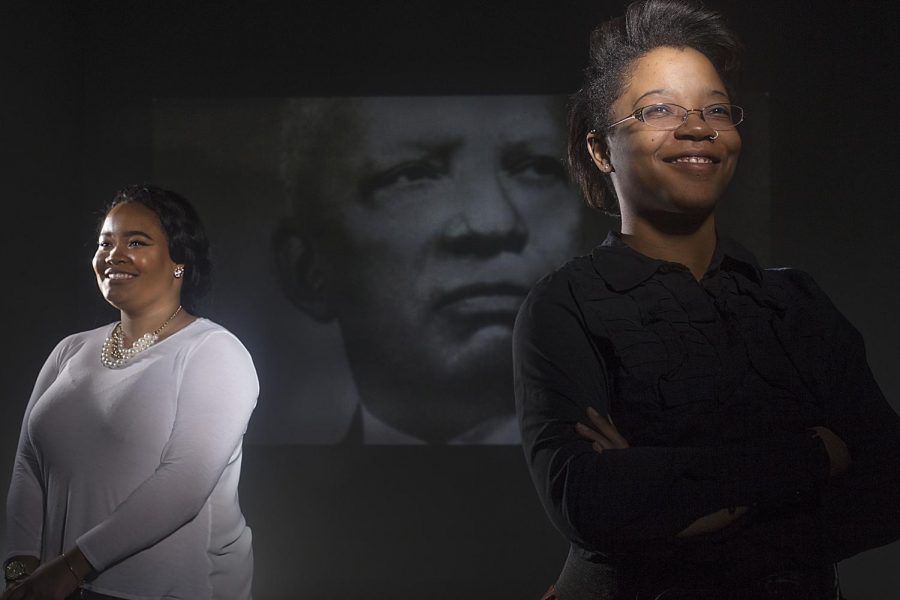 "[The Association for the Study of African American Life and History] is a hard club to be in," said professor Selena Sanderfer, right, "We do research...to promote learning about black history and culture. It takes a commitment outside of class." ASALAH was founded in 1915 by Carter G. Woodson. Woodson, who is projected on the wall, was one of the founders of Black History month. Sanderfer, faculty advisor of the university's chapter of ASALH, and community outreach chair sophomore Kaila Reece, left, are excited about the future of the organization. "I really want it to be something that everyone can be a part of," said Kaila. "We don't just reach out to the students but also faculty and staff." Alyssa Pointer/HERALD

The Association of the Study of African-American Life and History at WKU is revamping its mission now that it is under new advisory.

ASALH is a national association begun in 1915 by Carter G. Woodson, an African-American writer and historian, to study and educate about African-American history. Woodson is known as the father of Black History Month, according to Biography.com.

WKU began an ASALH chapter in 2013 under the advisory of former African-American studies professor Lloren Foster.

“I was the assistant advisor under Dr. Foster because this was a movement I fully supported for this campus,” assistant professor Selena Sanderfer said.

ASALH’s vision was to teach and research African-American culture, according to Sanderfer.

Sanderfer began to embark on some of her plans for ASALH last semester by attending and taking three students to a conference in Atlanta on black activism.

Louisville senior Marcus Stubbs was one of the participants who went to present at that conference.

“Me and Marcus had conversations about issues on campus and how we wanted to bring more of the African-American community on campus together,” Hooks said.

Passion for engaging the black community on campus interested Nashville sophomore Kaila Reece as well. Reece is the community outreach and fundraising chairwoman for ASALH.

Reece said she wanted to bring more ideas to the organization and become more vocal on campus.

“My goal for the organization is to encourage the black community and raise awareness on certain issues,” Reece said.

ASALH began this semester with two engaging events covering topics such as the history of black caricatures and a discussion on race. Both were cosponsored by the Student Government Association.

“I think these are discussions that need to be had amongst the campus so we can settle tension,” Hooks said.

Sanderfer said she is proud of the student executive board and believes some of her goals for the organization will be completed successfully because of their dedication.

“They work so hard. They research and type papers on topics that aren’t class related; that’s dedication,” she said.

Sanderfer said she hopes to begin oral history lessons in the near future. Oral history, according to Sanderfer, is having people who were a part of a movement, organization or establishment speak about it from their point of view.

“The Black Cultural Center would be a perfect example for doing oral history,” Sanderfer said. “Having the first people who petitioned for it, Ransdell and the first students to occupy it would be an educating experience.”

ASALH’s main aim is to inform more people about the history of African-Americans, Sanderfer said. The organization previously hosted a die-in in Downing Student Union and plans to have open mic nights and more panel discussions about race.

“[There’s] lots more in the future that I’ll keep secret now,” Reece said. “I’m very excited about the turnout we got at the diversity dialogue ‘Dear White People, Dear Black People,’ and I know it can only go up from here.”