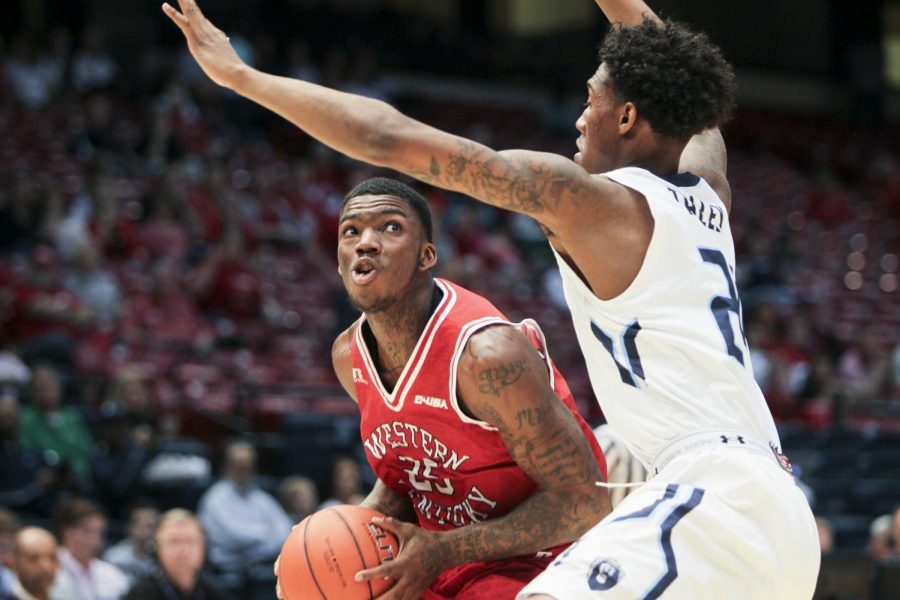 Western Kentucky Hilltoppers guard Fredrick Edmond (25) is carefully guarded by Old Dominion Monarchs forward Zoran Talley (24) as he drives for a basket. WKU leads the Monarchs 35-32 at the half, during the semifinals of the C-USA tournament in Legacy Arena in Birmingham, Alabama. Lex Selig/HERALD

The WKU men’s basketball team fell to the Monarchs of Old Dominion in the semifinal round of the Conference USA basketball tournament with a final score of 89-77 on Friday.

“I have no regrets. I felt like I played as hard as I could and did everything I possibly could. It just hurts right now,” redshirt senior forward Nigel Snipes said.

The Toppers put up a good fight for most of the game as they were able to lead at halftime 35-32, holding Old Dominion senior Trey Freeman to just eight points in the half.

“We had it right there in front of us. We had opportunities and he [Freeman] made tough and contested shots,” Head Coach Ray Harper said.

The second half was an entirely different story. Freeman scored 34 in the second half, ending the night with 42 points. Freeman’s total broke the record for most points scored in a C-USA tournament game.

“Some of those shots, I had my hand right in his (Freeman) face or two hands in his face. I tip my hat to him for making those,” redshirt senior guard Aaron Cosby said, according to Zach Greenwell of the Bowling Green Daily News.

WKU had four players finish with double figures in the scoring column. Cosby finished with 21 points on 7-13 from the field. Snipes had a big game, going 6-11 from deep and putting up 18 points.

Junior guard Fredrick Edmond ended the game with a 14-point performance going 6-9 from the field. Sophomore forward Justin Johnson put up 12 points in the contest.

After the game, both Harper and the players expressed optimism for the future.

The Hilltoppers end the season with a record of 18-16.

Ed. note: A quote used in this story previously lacked proper attribution. The quote has been correctly attributed to Zach Greenwell of the Bowling Green Daily News. The Herald regrets the error.