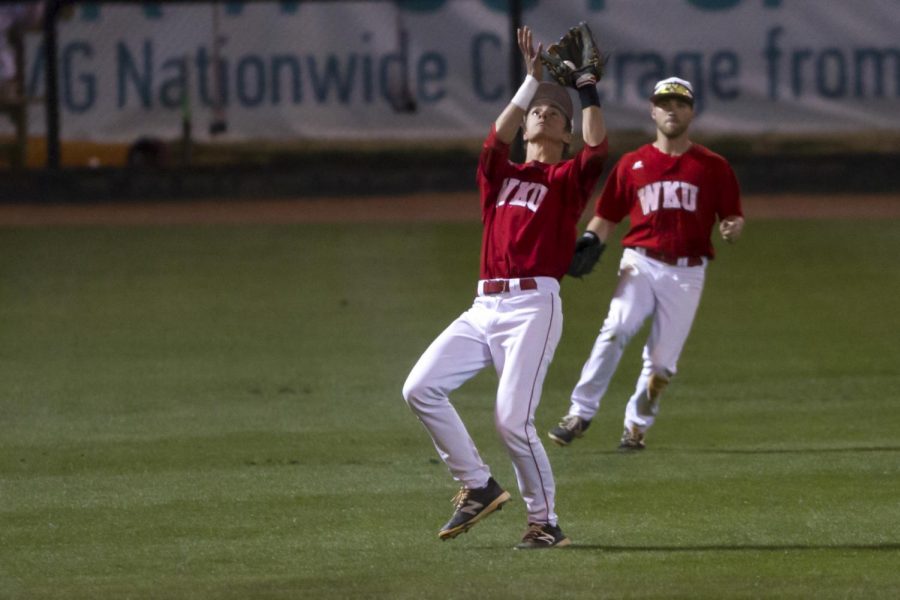 Sophomore outfielder Kaleb Duckworth catches a fly ball during the Hilltoppers 17-0 loss to the University of Louisville on Tuesday at Nick Denes Field. Duckworth reached base twice, had one hit and one strike out. SHABAN ATHUMAN/HERALD

Last season, the Hilltoppers took down No. 3 Louisville 7-3 at Jim Patterson Stadium with Josh Bartley, who is now a senior, at the mound.

However, U of L sophomore pitcher Kade McClure and company made sure there wouldn’t be a repeat of last season. McClure gave up only one hit in 6.0 IP while the Cardinals outhit the Toppers 20-3 en route to a 17-0 victory.

The loss was the first time the Toppers were shut out at home since March 14, 2011, against South Alabama.

“They outpitched us, they outhit us, they outplayed us,” Head Coach John Pawlowski said after the game. “That’s a very good club. Give them credit; they were a better team than us tonight.”

After McClure and junior pitcher Cody Coll pitched two scoreless innings, the Cardinals made the game’s first big play from the plate.

Louisville’s Colby Fitch hit a three-run bomb off Coll to give the Cardinals an early 3-0 cushion. After two more scoreless innings, the Toppers finally got their first hit and threatened to score in the bottom of the fifth.

With two men on base and two outs, freshman infielder Steven DiPuglia hit a strike up the middle to Louisville shortstop Devin Hairston. Hairston made an acrobatic diving catch and throw to first to keep the Toppers off the board after five innings.

After Hairston’s play, the route was on. In the top of the sixth inning, Louisville’s Blake Tiberi’s RBI triple-scored Hairston to extend the lead to 4-0.

Soon after, Will Smith scored Hairston to extend the lead to 5-0. Louisville’s Logan Taylor, Corey Ray and Devin Mann followed Smith up with RBI’s of their own to give the Cardinals an 8-0 lead.

“At some point, our team will learn that you can’t make some of those mistakes we made tonight against a team like that,” Pawlowski said.

After the Toppers went 1-2-3 from the plate, the Cardinals went back to work in the top of the seventh. Colin Lyman drove in Hairston for one more run. Ray followed that up with an RBI of his own to give the Cardinals a 10-0 lead.

“We’re very disappointed by the way we performed,” Pawlowski said about his team’s performance in front of the home crowd. “We had a big crowd and didn’t give them anything to cheer about. They stuck around, and I was hoping to get them fired up, but unfortunately we weren’t able to do that tonight.”

Finally, something positive happened for the Toppers in the bottom of the seventh.

Senior infielder Danny Hudzina singled through the right side, extending his hitting streak to 29 games.

Hudzina entered the game leading the nation in hits with 47.

However, the Toppers came away with zero runs as the Cardinals went back to work at the plate.

After the Cardinals extended their lead to 14-0 late in the top of the eighth, freshman Cameron Shryock made his debut at the mound.

The Bowling Green native pitched 1.1 innings, giving up 3 hits and 3 runs as the Cardinals won by a final score of 17-0.

“We shook a tough loss last week and rebounded. We need to do that again,” Pawlowski continued. “It’s tough when you get beat like that. We don’t have many positives things to walk away with.”

Next, the Toppers will travel to Birmingham, Alabama, on Friday for a three-game series against the University of Alabama, Birmingham (10-15, 2-4 C-USA). Both teams will be looking to rise above .500 in conference play.