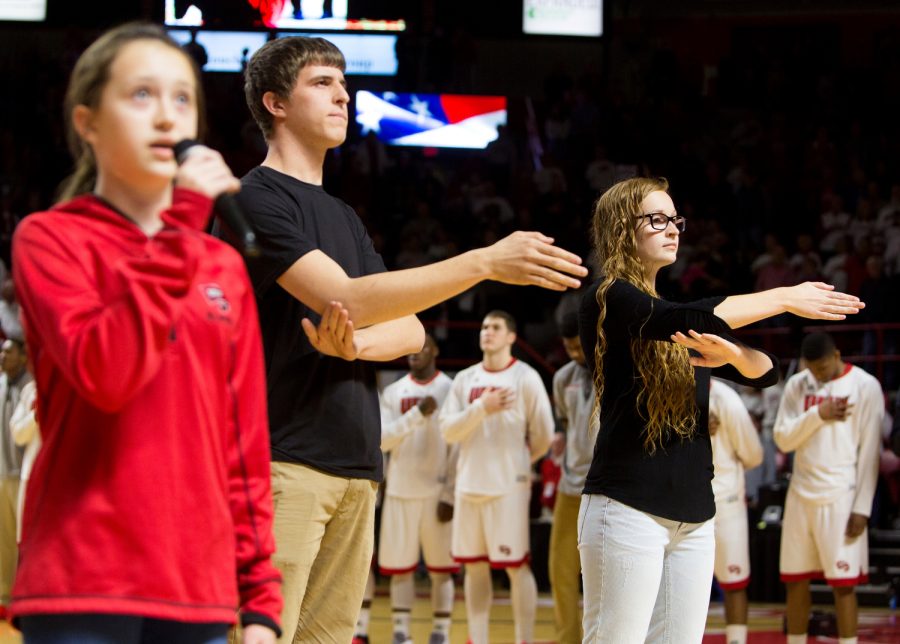 Members of the American Sign Language program sign the National Anthem before the WKU basketball game against Louisiana Tech in Diddle Arena, on March 5. This is a new feature at basketball games and will continue in the future. Jacob Hurdt/HERALD

Performing the national anthem at sporting events is a fundamental tradition. This year, for the first time, deaf WKU fans were able to experience that tradition at Diddle Arena.

At each of the final three home games of the men’s and women’s basketball season this year, the student-lead American Sign Language Organization has signed along with the sung national anthem before tipoff.

The partnership between ASLO and the athletic department began with obtaining tickets for deaf fans to attend with a translator. Fox said ASLO then offered to sign the national anthem.

Zach McKay, the marketing director for athletics, said the athletic department was very open to the idea of students signing the national anthem.

“We thought it would be a very cool event,” McKay said.

Members of the ASLO hope to continue the practice of signing the anthem for athletic events at WKU. Junior and signer Austin Rutland of Lexington said signing at events like games raises awareness about deaf culture and the ASL program.

The Hilltoppers won a close game after overtime against Louisiana Tech on March 5. Anticipation of a great game paired with senior night lead to a great turnout.

“I got really nervous because the stadium was packed,” said junior Miranda Kittinger, who signed at the last home game this year.

“We’re not just signing word for word,” Rutland said. “We have to break down what the lyrics mean, so it’s a little more creative.”

The ASLO is also highly involved in the local deaf community. Students can minor in ASL at WKU, and the credits they earn can be used to fulfill foreign language requirements.

“I thought it was a great experience for our students and fans,” Fox said about the games. “I hope we can have translators at all sporting events and university events.”

Ed. note: A previous version of this story incorrectly identified the students as “interpreters.” This has been corrected to a more accurate “signers.” In addition, the article contained a few references to “being hearing impaired,” instead of the more-acceptable reference of “deaf.” These errors have been corrected in the online version. The Herald regrets these errors.