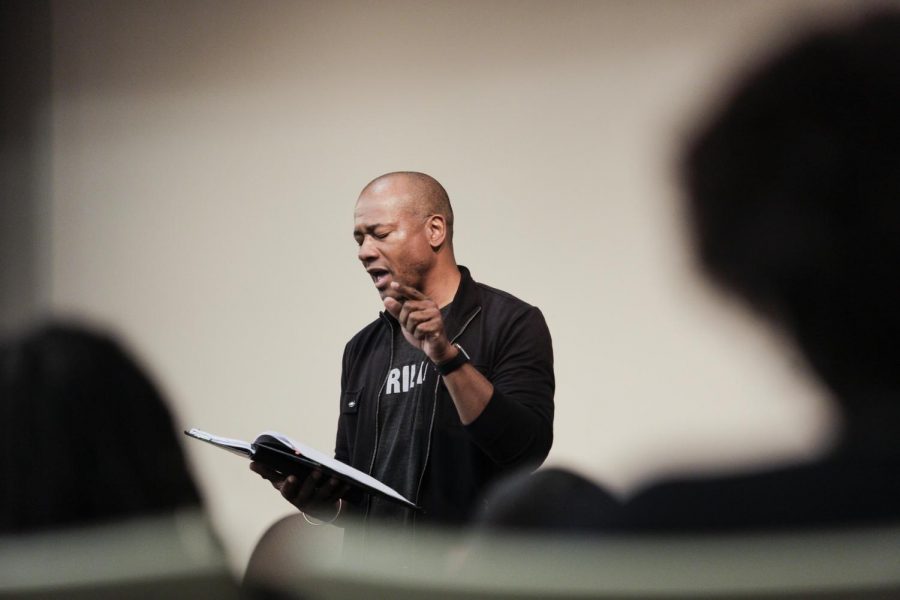 Poetic verses and the imagery of vivid stories filled the confines of Ransdell Hall Auditorium on Tuesday as Frank  X Walker held a public reading and book signing.

Walker is a graduate of the University of Kentucky and holds a Master of Fine Arts in Writing from Spalding University. He is a founder of the Affrilachian Poets as well as the term from which the group derives its name.

The term “Affrilachian” was first coined by Walker in his 2000 book of the same name. Affrilachian has come to be defined by the New Oxford American Dictionary as “An African American who is native to or resides in Appalachia.”

Walker said his reading at WKU was the second of 20, two of which occur in Kentucky, that he will deliver this spring. He presented the first reading at Alice Lloyd College two weeks ago.

“I’m the kind of poet, writer, artist that likes to interrogate a subject, to hold up to the light, to ask it to tell the truth,” he said.

Walker’s first two poems came from his 2000 book “Affrilachian.” The first, “Death by Basketball,” spoke about the sport’s fame and commercialism.

The poem centers around a third-grade student as they choose playing basketball over educational pursuits.

“On a court made bald from daily use and instead of writing his spelling words he signed a contract he could barely read,” the poem reads.

Walker later read poetry from a current research project. He said he is investigating the foundations of institutional racism in the United States, and right now he’s looking specifically at former president Thomas Jefferson.

“Whatever you believe about the great Thomas Jefferson, and whatever desire you to have to visit Monticello, understand that that story and that history and that reputation has been cultivated and shaped to be warm to people who don’t ask questions,” Walker said.

Walker’s inspiration for his poems was based on Jefferson’s “Notes on the State of Virginia.” Jefferson’s work is broken up into different queries, and Walker looks specifically at Query 14, which chronicles Jefferson’s thoughts on African men and women, including their skin, hair, odor and other physical characteristics.

Walker also read work from his 2013 collection “Turn Me Loose: The Unghosting of Medgar Evers.”

“Medgar was assassinated in 1961. Most young people know about Dr. [Martin Luther] King, Malcolm X, JFK’s assassination … without even realizing Medgar was the first in a kind of series of political assassinations in the Civil Rights era,” Walker said.

Aalayah Purnell, Harrodsburg freshman and Walker’s niece, said she didn’t know about his poetry until her stepfather told her about it, and Walker’s reading was the first time she had heard him speak publicly.

Purnell said his poetry was unexpected yet inspiring for her. She said “One-Third of 180 Grams of Lead” from “Turn Me Loose” stood out to her the most.

“I really, really like that one. Even though it wasn’t one of the more positive ones, it stuck with me the most,” Purnell said.

Walker closed his reading with “Love Letter to the World.”

“Thank you, world, for this open-book exam before us, for still believing we are worthy of your love,” the poem reads.