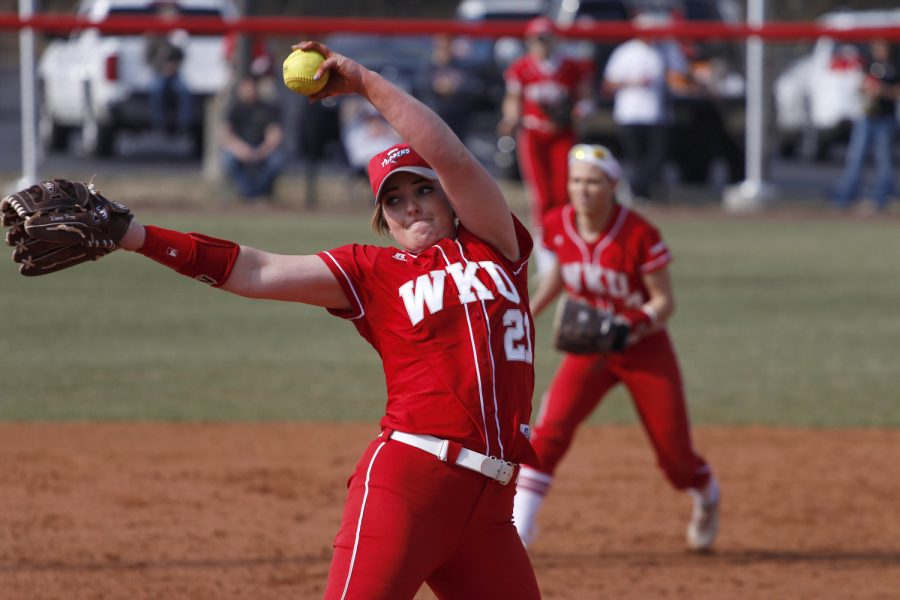 WKU's Hannah Parker (21) winds up for a pitch during the WKU vs. Missouri State softball game at WKU on Feb. 20, 2016. The lady Toppers had a 4-3 victory over Missouri state. Kathryn Ziesig/HERALD

The Lady Toppers are set to play Lipscomb University in a double-header at home Wednesday after five games were cancelled over the past week due to weather.

The team was scheduled to play five contests on the road with two in Itta Bena, Mississippi, against Mississippi Valley State and three games against Louisiana Tech in Ruston, Louisiana. WKU would have played 10 games in a row on the road if these had not been cancelled due to bad field conditions.

The upcoming games against Lipscomb will be the team’s first home games since Feb. 28, when the Lady Toppers took an 8-3 loss against SEMO and a 1-0 loss against Western Carolina at the Bulldog Slamboree Tournament.

Lipscomb will travel to Bowling Green after three games against Houston that ended in mixed results.

Lipscomb played a double-header against Houston on Saturday and took two losses of 4-1 and 8-0. Lipscomb came back with a 5-3 win, though, when it faced Houston on Sunday.

The Lady Toppers are 8-10 so far this season. The team will continue to practice as it will have been 10 days since WKU’s last game when it faces Lipscomb Wednesday.

WKU will go into the game with a pitcher who has seen many success so far this season.

The team will enter the match with junior pitcher Kathryn Downing, who was named Conference USA’s co-pitcher of the week on March 7 after her performance at the Mississippi State Bulldog Slamboree.

Downing threw a combined 10.1 innings and allowed no earned runs with just one walk and four strikeouts in Starkville, Miss., that week.

In the match against the tournament’s host, Mississippi State, Downing had four no-hit innings. This is Downing’s first honor of her career.

The upcoming home games against Lipscomb will be held at the WKU Softball Complex with the first game at 5 p.m. and the second starting at 7 p.m.

After Wednesday, the team will prepare to take on Florida International in three games spread over Friday and Saturday. These will continue a home-game streak lasting until the end of the month.