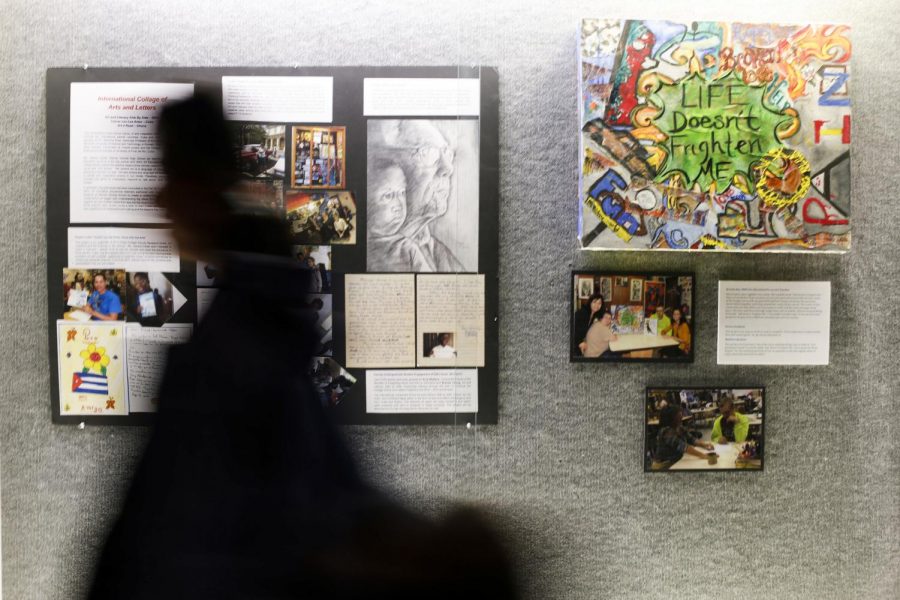 Students at the Ivan Wilson Fine Arts Center pass by the WKU Art and Literacy Exchange with Cuba exhibit on March 15, 2016. Srijita Chattopadhyay/HERALD

An exhibit of Bowling Green students’ artwork from Cuba, known as CreArte, is being exhibited in the Fine Arts Center from Feb. 22 to April 3.

The project began in Pinar Del Rio, Cuba, and is a multi-entity program involving the WKU art education department, high schools in the Warren county region, and students and artists at the Center for Jose Antonio Diaz Pelaez Experimental Art School in Havana.

“I went there to learn about music and the drums, but instead I found art,” Choe said.

Choe’s  studies in Cuba were cut short due to a policy drafted by the Bush administration at the time, but she eventually received another opportunity to experience Cuba in 2013 when she visited on behalf of the WKU art education program.

While there, Choe stumbled upon an opportunity allowing her to create a new learning experience for both U.S. students and Cuban students.

“It happened by accident,” Choe said. “I was giving a presentation about our WKU art education program to teachers in Cuba and was approached by Juan Silvio.”

Silvio, the art representative for the Cuban CreArte program, was interested in experiencing American art education in Cuban classrooms. After negotiating for some time, WKU helped create an exchange program with the Diaz Pelaez Experimental Art School in Havana.

The program began with Warren Central High School students, who at the time were having difficulties with reading and writing.

“The students’ reading levels were lower than their age, so we wanted to use art as a way to improve their reading abilities and basically their desire to learn,” Choe said.

Choe brought back letters and art made by Cuban students and used it within the classrooms of Warren Central.

“In the beginning, [students] refused to write one to two sentences, and by the end they were writing paragraphs and were able to read off of PowerPoints in front of the class,” Choe said.

Choe began to notice the development of the Warren Central students. Later, she was inspired by Ecuadorian artist Oswaldo Guayasamîn for his five-panel piece “Mural Ecuador,” so she began to expand the exchange program, collaborating with Amy Wallace and Neli Ouzounova from Bowling Green.

Wallace participated in the program while a student at WKU. After graduation she received a job at Jody Richards Elementary school as a fourth grade teacher and began to incorporate her classroom within the program. Ouzounova has been a part-time faculty member for WKU for 10 years and recently opened her own studio.

Ouzounova had her drawing students last year create a two-and-a-half sectioned panel in which they each used symbols to represent who they were and who they would be in the future. She took the panels to Cuba and had Cuban students and artists add to her U.S. students panels prior to creating their own.

“Part of the composition was left blank, so artistically Cuban students had to complete the rest it was like leaving it as an open sentence,” Ouzounova said. “Once it came out of my classroom it was no longer a rigid assignment. The Cuban students were very receptive, and we were fortunate to have this collaboration.”

Wallace, a teacher at Jodi Richards Elementary School, used a similar learning technique within her classroom. Wallace’s class created their own version of “Mural Ecuador” in which each student created a five-panel piece to show their identity and wrote about what they drew and how it identified with themselves.

Wallace used this opportunity to conduct a study on art integration.

“I wanted to see if integrating art within the classroom as opposed to taking it away would be beneficial,” Wallace said. “It was very successful; however, it is still an on going study.”

The interaction among U.S. students and Cuban students also allowed for an in-depth look into the similarities and differences each culture has.

“I noticed that the Cuban students are not really involved with tech as they were with communication,” Wallace said. “The children in Cuba are not afraid to try something new. They are able to get up and perform; however, students here are a bit more timid because of what their peers think.”

Wallace talked to her students about the cultural differences students in Cuba have.

“When something happens to [Cuban students’] plans, they do not sit around and complain. Instead, they find another plan,” Wallace said. “Students here, though, throw a small tantrum before finding something else to do. It’s a big difference in culture, and my students and I talked about what makes Cuban students different.”

The interaction through art provided a new form of thinking for the U.S. students involved.

Choe said the understanding of how less resources benefited Cuban citizens created a better way of thinking for the U.S. citizens.

“It happens individually and not all at once. When the students see writing and read the Cuban students writing, it gives them an opportunity to respond personally,” Choe said. “Art is personal, and I think it touches the students in that way.”

Choe said the interactions created a profound self-reflective process that heavily showed in the students’ drawing.

“Through the process, students begin to trust what they feel and think and use it to connect to some place so far away,” Choe said. “Having this trusting ability and new perspectives help form new connections.”

Bowling Green native Hayley Young provided her own touch to the identity project.

“I did something unorthodox and added a white-out pen because I wanted them to add white to the pencil drawings,” Young said. “It took over and people began adding red or black, and now it’s just morphed into adding more color.”

“It was a little way for me to kind of instruct without saying a word,” Young said.

Choe said she believes this program has helped provide the opportunity to think in a new way and help better form U.S. and Cuban students.