Lady Toppers blow past Dayton to advance in Women’s NIT 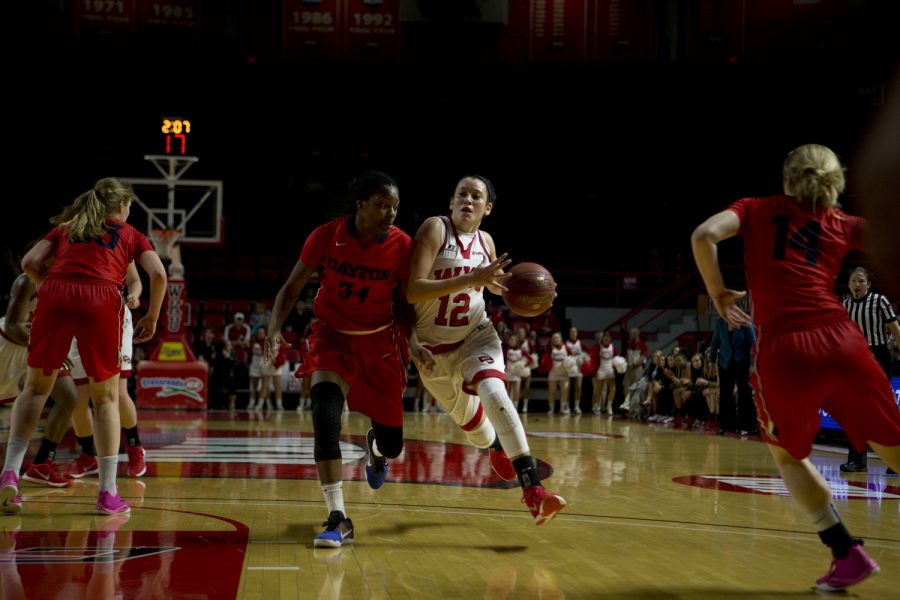 Junior guard Kendall Noble (12) drives towards the hoop during the first half of the game on Thursday.The WKU Lady Toppers basketball team take on the University of Dayton Lady Flyers in the first round of the NIT tournament at Diddle Arena in Bowling Green, Ky on Thursday, Mar. 17, 2016. Matt Lunsford/Herald

Not even one hour after news emerged from the WKU men’s basketball program that Head Coach Ray Harper had resigned amid the suspension of three players, there was a basketball game to be played in Diddle Arena.

The Lady Toppers team hosted Dayton in a Women’s NIT first-round game, and the Lady Tops picked up an 89-72 victory to move on to the second round of the tournament.

“I think it was a complete 180 from the last game,” redshirt junior guard Kendall Noble said. “We were excited, had energy and we were just having fun playing hard like coach asks us to every game.”

On March 7, Noble was named Conference USA Player of the Year. Since then, Noble has been playing as if she has to earn that award again.

First, she notched the second triple-double in program history and her second triple-double of the season in a loss to Marshall at last week’s C-USA Tournament. On Thursday, she dropped 27 points, grabbed five boards and dished out five assists. At halftime, her stat line read: 18 points, five rebounds and four assists. Noble made 17-18 free throw attempts on the night and was in full attack mode the whole game.

“Incredible.” That was the first thing Head Coach Michelle Clark-Heard said when asked about Noble on Thursday night.

“She said to me, ‘I was really mad when I missed the one [free throw] that I did,’ and that’s just the type of player she is,” Clark-Heard said. “I’m just so honored to have the opportunity to watch her every day and help and coach her.”

Noble has become a transformative player for Clark-Heard’s team. The Lady Tops are moving on to the second round of the WNIT to face University of Tennessee, Martin.

“I think it was just effort really. That’s all coach asks,” Noble said. “At Marshall we didn’t really play hard at all. We were flat, didn’t have any emotion and tonight we were bouncing around, playing hard and having fun.”

Several players stepped up to help Noble put away the Flyers. Sophomore forward Ivy Brown hit two early three-pointers but was plagued with foul trouble for most of the second half.

Freshman forward Dee Givens and junior guard Ima Akpan picked up some of Brown’s slack in the second half, however. Givens nailed all three of her three-point field goal attempts, scoring 11 total points for the game. Akpan had a very strong performance in 27 minutes off the bench, scoring 10 points and grabbing seven rebounds.

“They gave us a huge lift,” Noble said of the bench players. “Ima was hustling, getting rebounds and making shots over seven-foot girls. I don’t know how they were going in, but they were. Dee came off the bench halfway through the game and hit three huge threes and helped us get a lead. It was just a total team effort.”

For the second consecutive game, sophomore guard Tashia Brown struggled shooting the ball and was held to just 11 points on 4-11 shooting from the field. Luckily for WKU, freshman guard Kayla Smith stepped up and had 18 points and three rebounds to keep the Lady Tops afloat.

“When you have young players, you have to understand that there’s times that you never know what’s going on but they continue to keep working and be the best that they can be,” Clark-Heard said. “[Smith] is just a joy to coach—always has been—and I’m just proud of her that the ball was going in the hole for her tonight.”

Dayton gave a strong effort and kept it to a four-point game at halftime. Jenna Burdette had 19 points to lead Dayton, and the Flyers outrebounded WKU 43-31. Part of that rebounding deficit was likely due to the absence of freshman forward Taylor Brown.

Brown was not out to warm up with the team prior to the game and did not sit on the bench once the game started.

“She’s dealing with some personal things,” Clark-Heard said. “That’s kind of what’s going on right now, so we’ll just tackle it as it goes.”

With or without Taylor Brown, the Lady Tops are staying focused in pursuit of a championship.

“We’re really excited because our goal is to just win a championship,” Smith said.

The Lady Tops will host UT Martin in Diddle on Monday at 7 p.m.