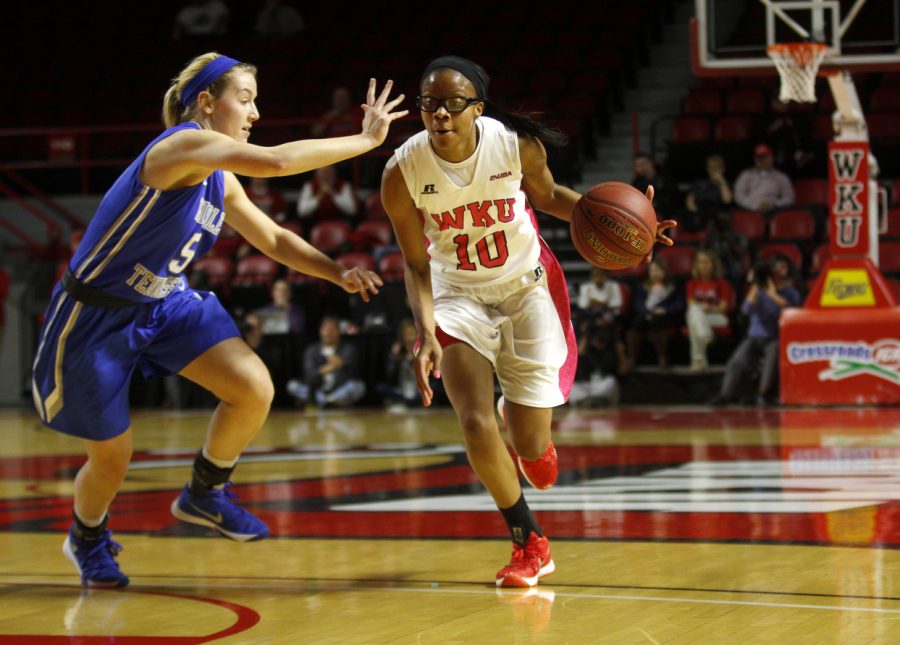 WKU forward Tashia Brown (10) dribbles around MTSU guard Abbey Sissom (5) during the first half of the lady Toppers 32-30 lead over MTSU on Thursday at Diddle Arena. Kathryn Ziesig/HERALD

The WKU women’s basketball team woke up on Wednesday morning not knowing who its next opponent would be. But that didn’t matter to them.

The Lady Tops have spent the days leading up to the Conference USA tournament focusing on improving as a team.

“All preseason and practices and summer workouts— this is what we work for so it’s exciting to finally be here,” senior forward Jalyyn McClain said.

Conference tournament success hasn’t been hard to come by since Head Coach Michelle Clark-Heard took over at WKU in 2012.

“I’m really excited,” sophomore forward Ivy Brown said. “I’m ready to get this going. I think we have a really good opportunity here. You’re gonna get everybody’s best game. The competition level comes up as the week goes on.”

Perhaps the only downfall for WKU in receiving the three seed and a double-bye to go with it is the uncertainty in who the Lady Tops’ first opponent will be.

Sixth-seeded Marshall and 14th-seeded Florida International will meet at 7:30 on Wednesday to decide just that. WKU is a combined 3-0 against Marshall and FIU this season, sweeping Marshall and grabbing a two-point road victory over FIU in December.

Brown said that recent practices haven’t necessarily been geared towards game planning for two different opponents. Instead the Lady Tops are working on fine-tuning some things in preparation for Thursday evening’s game.

“We’re just focusing on the defensive fundamentals right now,” Brown said. “Everybody we’ve played so far does a side pick-and-roll so we’ve been working on that a lot lately and just the little things on offense as well as we’re putting in new stuff. You always have an idea of who you might play but it’s never certain, especially in a tournament like this, so we’re just focusing on us right now and trying to get better.”

If all goes as normal, higher-seeded Marshall will be taking the court against WKU in the quarterfinals.

“They shoot a lot of threes and Leah Scott was a first team all-conference player and she’s really good when she’s hot,” Brown said. “They’re a bigger team—bigger than us—but who isn’t We just gotta battle on the boards and play defense. I think that’s our biggest challenge.”

Scott averages 16.6 points per contest for the Thundering Herd, and shoots the ball at a 32 percent clip from behind the arc.

“They can shoot the three, but it’s really just about us and what we’re trying to do,” McClain said.

Upsets are common across college basketball on championship week, however, and FIU has already won its first game as the lowest possible seed in the tournament.

“They’re definitely a scrappy team. We went down [to FIU] and it was a battle to the end,” Brown said. “They have a big post player and a couple of good guards too, so I think just playing defense and playing hard the entire game [is important].”

No matter who the Lady Tops play, they have experience in win-or-go-home situations. Two straight conference tournament championships and back-to-back trips to the NCAA tournament can be an advantage for a team that is relatively young like WKU is.

“[We’re] really just focusing on the moment now and not really the past and what we have done,” McClain said. “I mean don’t get me wrong [past success is] good, but just focusing on tomorrow and taking it one game at a time and being able to carry it over and winning on Saturday is what’s important.”

When the ball is thrown up for the opening tip at 7:30 p.m. on Thursday in Bartow Arena, one thing is certain: WKU will be locked-in and ready to go.

“We’re gonna come out ready to go,” McClain said. “We don’t want it to be close.”