Office of Sustainability prepares to bring bees to Community Garden 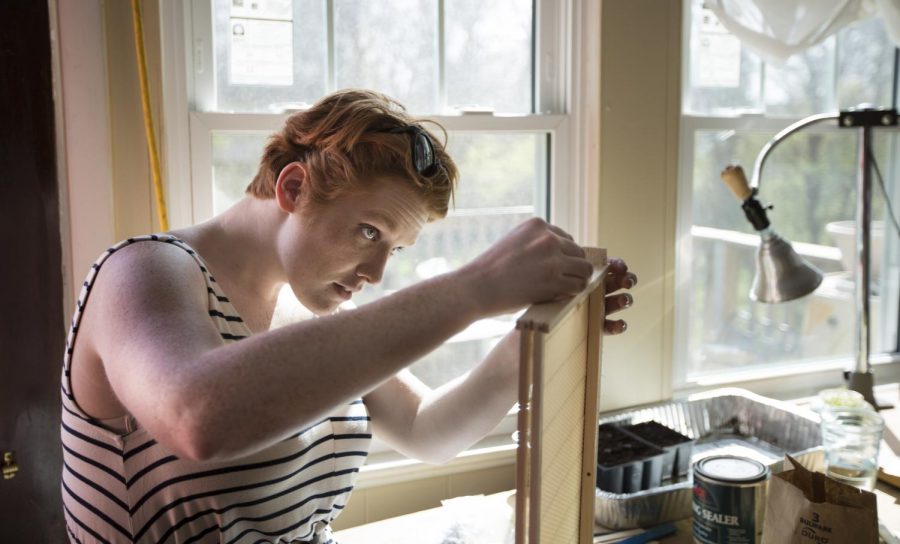 Freshman Ammica Smith, 19, builds a bee hive during a bee keeping workshop at the Office of Sustainability on March 18, 2016. Smith said "I came to get involved in more activities on campus." Jacob Hurdt/HERALD

he Office of Sustainability’s Community Garden will soon be buzzing with bees.

On Friday, the garden was full of the pounding of hammers as a group of students gathered to help construct a beehive to house the honeybees that will arrive in the garden on March 28.

Christian Ryan, coordinator of the Office of Sustainability, said introducing honeybees to the garden has been a long process.

“We have wanted to have bees in the garden for a long time because they are obviously very helpful to the garden, and we want to support bees here, there and everywhere,” Ryan said.

Ryan said the process began nearly two and a half years ago when the Big Red Beekeepers, a club of beekeeping enthusiasts at WKU, contacted her about a colony of bees living in an unused house on campus. At the time, the Office of Sustainability had a different office location.

The bees were moved to the student garden at the University Farm. Ryan and John Osborne, the former vice president of the Division of Campus Services and Facilities, decided to move the Office of Sustainability into the bees’ former home.

Since then, the office has focused on sustainability efforts by installing solar panels and creating the Community Garden and Project Grow.

We’ve been waiting to bring bees back for a long time, so it’s exciting that it’s finally, finally happening.

During those few years, the garden remained mostly bee-free while talk to bring honeybees to the garden increased.

“It seemed right to bring bees back to the Office of Sustainability because that’s what led us here to this location in the first place,” Ryan said.

To house the bees, Ryan said the office needed a mentor to guide them in a process they knew very little about. That is where Cassandra Cantrell came in.

Cantrell, an adviser for the biology department, said she has worked around bees for much of her life. She was first introduced to them when she stumbled into a beekeeping workshop while studying at the University of Tennessee, Knoxville.

“I’ve been in love with them ever since,” Cantrell said.

Ryan was able to connect with Cantrell, and that is when the plan to bring bees to the garden began to take shape.

“We were pulling the trigger on everything to get it started because I thought, ‘If we’re going to do it, let’s do it because now’s the time,’” Cantrell said.

Ryan said with the neighbors’ blessing and material for the hives donated from the Big Red Beekeepers, Cantrell and Ryan were able to order the bees and make plans to construct a hive, which will be located among plants in the back of the garden.

Cantrell said the bees will be brought in by the Walter T. Kelley Company, a company that specializes in beekeeping. The bees, most of which will be female, are an Italian strain that can withstand cold winters.

When the bees arrive, the wooden hive will already be constructed and contain beeswax so the bees will not be forced to construct their own hive. This will help the bees establish themselves quickly in the environment.

Cantrell said she will help facilitate the entire process while spreading her love of bees.

“I hope to keep [the beekeepers] going and teach them so that these are skills that, even after they graduate, they’ll have enough knowledge and skills to do their own bee hives if they want to at home,” Cantrell said.

Her fascination with bees is already taking root in several students.

Sean Nelson, Evansville junior, volunteers with the Office of Sustainability. He said he has worked on numerous projects in the Community Garden but believes working with the bees will be the most exciting project yet.

“This is probably, honestly, one of the coolest things I’ve seen here,” Nelson said. “I’m glad I volunteered here this semester to be here for it.”

Despite his excitement, Nelson said he has never worked with bees before.

“I’ve never been stung, so that’ll be fun the first time,” Nelson said.

Freshman Annika Smith of Corbin said she, like Nelson, has no experience with bees but is excited to work with them. She helped build the hive and said she plans to return when the bees arrive.

“I really like doing it, honestly, even though it’s not something that I’m used to doing,” Smith said. “It kind of reminds me of things I would have done as a kid.”

Anyone who chooses to work with the bees will have the guidance of the Big Red Beekeepers and their president, Perri Kostecki.

Kostecki, a sophomore from Louisville, said she became the club’s president purely through accident but has grown to love the bees since she attained the position.

“They’re the most amazing creatures ever,” Kostecki said. “I’m going to already dedicate myself to this little endeavor, so hopefully I’ll be here quite a bit.”

Ryan said all volunteers and staff will be in line to receive the bees’ honey when it becomes available. Some of the honey will also be given to the WKU Food Pantry.

She said she was glad the bees were finally going to become part of the garden.

“We’re very excited for this,” Ryan said. “We’ve been waiting to bring bees back for a long time, so it’s exciting that it’s finally, finally happening.”