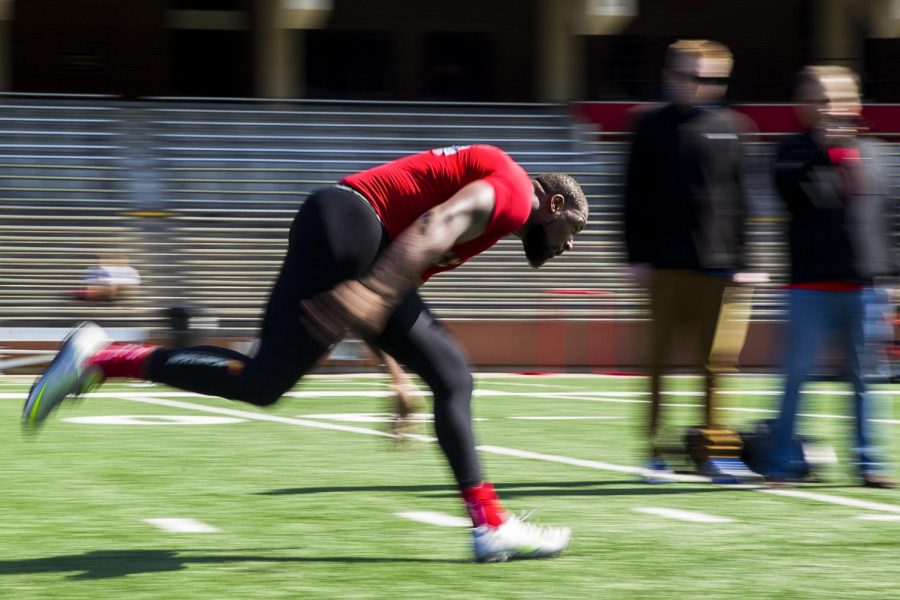 On Tuesday, the Hilltopper football team held what was the program’s largest Pro Day in its history at Smith Stadium.

Thirty of the 32 NFL teams were in attendance to see quarterback Brandon Doughty, tight end Tyler Higbee and defensive back Prince Charles Iworah among others workout for a chance to be a professional athlete.

“It’s an honor to be out there in front of scouts,” Doughty said. “It’s a complete blessing. I was telling some of the guys after I finished that this was an absolute honor.”

Many of the scouts were on the Hill Tuesday morning to see Doughty as he is currently projected to go between the fifth and sixth rounds of the NFL Draft, according to cbssports.com.

If drafted, Doughty would be the first WKU quarterback ever selected in the modern NFL Draft.

During the event, Doughty threw a multitude of passes to several different WKU players in front of all the scouts to showcase his talent.

“I got a lot of good feedback today,” Doughty said. “There were a lot of scouts here and a couple of GM’s, so that was cool.”

Unlike in some of his private workouts with other teams, Doughty was able to throw to some very familiar targets during Tuesday’s event.

“I had the luxury of having Antwane Grant and Jared Dangerfield out here,” Doughty said. “Those are my guys. They made it easier for me. In this setting with all the pressure, it’s really awkward as crap with all those people staring at you like a piece of meat.”

Doughty wasn’t the only player scouts were there to watch. Higbee also brought a lot of interest as he is currently projected to go in the fourth round of the draft by cbssports.com.

“I love Tyler Higbee,” Doughty said. “That’s my dude. It’s really cool seeing his progression. I know he has been working.”

Higbee did not compete at the NFL Combine due to a previous knee surgery, but he was able to run routes and catch balls in front of representatives from almost every NFL team on Tuesday.

Despite the attention given to Doughty and Higbee, Iworah may have stolen the show as the defensive back ran a reported 4.3 40-yard dash, which was the best out of all the Toppers who ran.

“It [Pro Day] went really, really well,” Iworah said. “I thank God for all the blessings he gave me. I worked hard for this the past two months. I’m just blessed. I’m truly blessed.”

Iworah is currently not projected to be drafted by multiple scouting sites; however, his impressive 40-yard time and the showcase of athleticism he displayed on Tuesday increased his chances of making it into the league.

Former wide receiver Jared Dangerfield is another Topper who tried to use the showcase as a way to better position himself to one day reach his dream.

“The weather was really good today, and we had a good turnout,” Dangerfield said. “I felt like I did pretty good out there. It’s a blessing to come out with my teammates one more time. It’s a great opportunity. I have been waiting for this since I was a little kid, and I have been dreaming of this day for a long time.”

One interesting aspect of the event was the participation of former basketball and football player George Fant who was listed as an offensive lineman, defensive lineman and tight end during the event.

Fant also had an impressive day as he weighed in at 296 pounds and still managed to run a reported 4.83 40-yard dash.

In comparison, the Bowling Green native only weighed 250 pounds during his senior season on the basketball team.

Even if some of these Toppers do not hear their name called at the draft during the weekend of April 30, Pro Day will always be a memorable day for everyone involved.

“It’s always a good time throwing the last time on the Hill,” Doughy said. “It’s kind of a special moment for sure.”