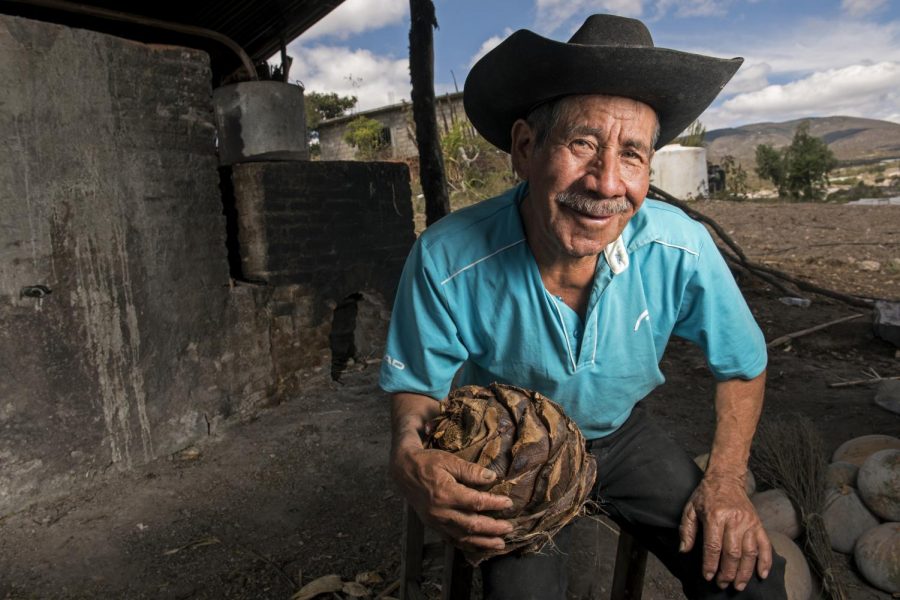 It was at the age of 18 when Eusebio Rios first got his hands on a maguey plant and his father introduced him to the process of making mezcal, an alcohol similar to tequila in that it comes from the agave plant. Where the two drinks differ is what makes mezcal an increasingly popular artisanal drink throughout the United States. Rios, 68, of Santa Ana de Miahuatlan in the southern state of Oaxaca, Mexico, dedicates countless hours to make a drink locals consume like water. For first timers, the taste can be flooring, but with time, the smoky flavor can be appreciated. However, a recent jump in prices of mezcal has put a damper on the flow of the drink, and it's due to a much larger problem. Over the last few years a spike in popularity across large swaths of the United States has put a strain on what was only produced for small towns throughout rural Mexico 20 years ago. Now growers have had to increase prices for the plant that takes anywhere from 8 to 12 years to reach its full size, and the lack of maguey is threatening livelihoods. "With this job I survive. I'm proud because it's honest work," Rios said. "It's a tradition that others have done before me, and I am carrying it on." Nick Wagner/HERALD

The maguey plant jutted out against the Mexican landscape in massive swaths just 10 years ago, but the recent rise in popularity far outside of the small pueblos where it is widely produced in Mexico’s second-southernmost state of Oaxaca has put a strain on more than just the plant’s population.

Romulo Cruz has perfected the process of making mezcal, or “oven-cooked agave” in Nahuatl, over his 53 years of making the drink. When the 67-year-old man learned how to craft the drink at 14 with his grandpa in his hometown of Santa Ana de Miahuatlan, maguey plants were available on a first-come, first-served basis. Now, Cruz and the three other mezcal producers in Santa Ana have to pay 100 pesos, or $5.71, for each maguey they claim from private growers, but it is worth the price.

The income Cruz receives from making mezcal has sheltered his family, expanded his operation and secured his future. On average, 15 plants amounts to 300 liters, or over $1,360 USD when brought to market.

The recent uptick in popularity of the drink across the United States is to blame for the ironically unfortunate dilemma for some 8,000 producers throughout Mexico.

According to Mexican government data on mezcal, sales grew by nearly 48 percent over a three-year period and exports jumped 79 percent from 650,000 liters in 2011 to over 1.15 million in 2014, a mind-boggling jump for a drink that possesses a sometimes flooring and alienating flavor. It may be this flavor experience that contributes to its success in overshadowing tequila as the “in” Mexican spirit of choice among craft cocktail houses and bars.

Although the newfound prominence of mezcal is exciting in the world of spirits, it still acts as the only lifeline for thousands of producers and their families throughout rural Oaxaca, and it is now threatened by overproduction. The state’s income per capita is Mexico’s lowest at $3,400 USD, and in a state where 22% of the population is illiterate and 45% haven’t completed a high school education, coupled with a government focused on conserving its image amid recent mass disappearances of students and incessant cartel violence, the thought of the government providing sustainable solutions for maguey growers and mezcal producers are almost nonexistent.