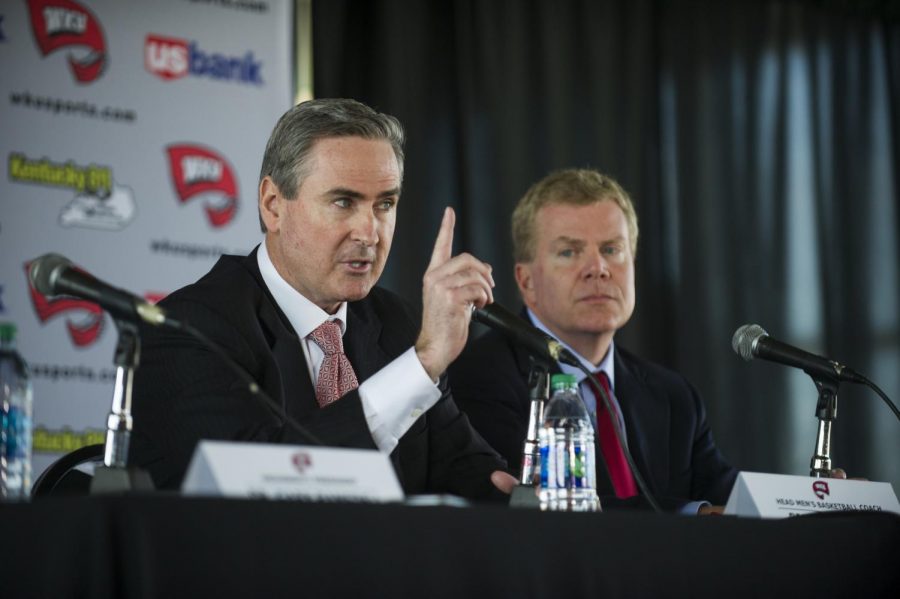 “I can’t tell you how excited we (his family) are to be a part of this,” Stansbury said at the press conference. “I am blessed to be a part of it. Growing up, I knew how it used to be here at Western Kentucky. However, it’s not about me. It’s about everyone here.”

The Battletown native was also the head coach at Mississippi State where he went 293-166 in 14 years at the helm. In those 14 years he led the Bulldogs to the postseason 11 times.

Before his tenure as coach at MSU, the Bulldogs had only gone to the NCAA Tournament seven times in the previous 86 years.

Stansbury also successfully graduated players at MSU at a rate second only to Vanderbilt at his time in the Southeastern Conference.

“We needed an experienced leader who understands every aspect of a basketball program,” Athletic Director Todd Stewart said. “Someone with a proven record as a winner, preferably as a head coach, who can lead our program and players to high levels of success on and off the court. With Rick Stansbury, you can check every box.”

Both Stewart and Stansbury mentioned the suspensions of freshman guards Marlon Hunter and Chris McNeal and junior guard Fredrick Edmond from the program following the results of a University Disciplinary Committee hearing on March 16.

“March 17th was a very difficult day for our men’s basketball program,” Stewart said. “I do want to take a minute to commend our players for the matter that they have rallied around each other since that time.”

“I do not expect the suspended players to return,” Stansbury added.

He later quipped, “I was trying to set up a pickup game with the players this morning, but I had no guards to bring the ball up the floor.”

Other points of discussion at the press conference was student support and game attendance.

“It all starts with the students,” Stansbury said. “We have got to get the pride back into these students and make sure it carries on long after they are gone. I can promise we are going to get those students back at our games.”

After the team finished with its second lowest average attendance total since the 1998-99 season, Stansbury promises that the attendance problem will be solved.

“They said it couldn’t be done at Mississippi State and 11 years in a row, my last 11 years, we sold out every ticket pre-season. That’s what’s going to happen right here,” Stansbury said.

Besides his ties to Meade County, Stansbury also has ties to WKU by way of his great uncle Col. E.B. Stansbury, who is a WKU Athletic Hall of Fame member.

Stansbury will inherit a roster that went 18-16 last season and is set to return most of its scoring from last season if the suspended players do return.

If not, then he will not inherit a single guard who is on scholarship from last season’s team.

However, two University of Tennessee transfers in redshirt freshman Jabari McGhee and sophomore forward Willie Carmichael will be suiting up next season and junior forward Phabian Glasco will be returning from injury.

“I look forward to getting this thing started and to hit this ground running,” Stansbury said. “My family and myself are all really, really excited to be a Topper.”