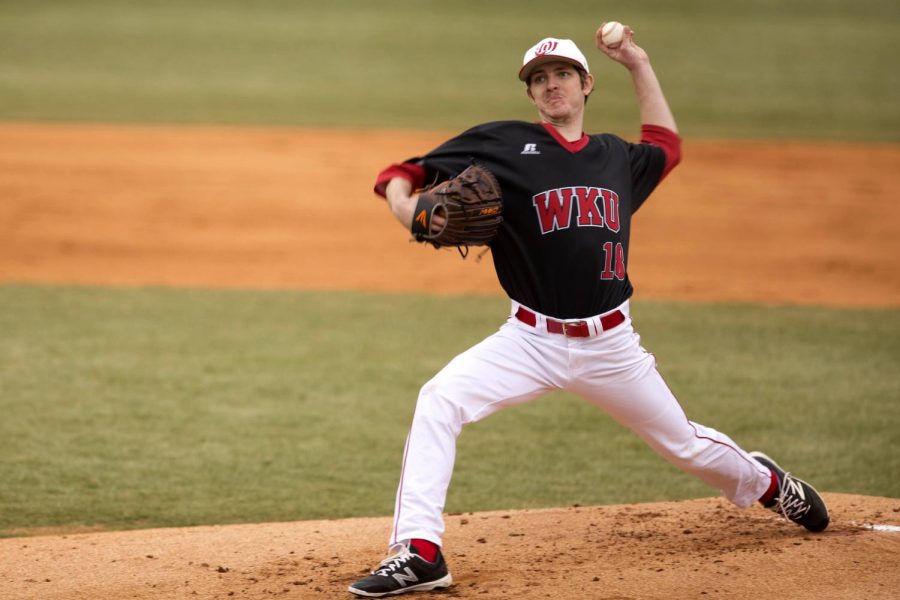 WKU senior pitcher Austin King (18) started the game for Hilltoppers and pitched five and a third inning before being relieved. King finished with five strikeouts and gave up six hits and two runs against Youngstown State Penguins during the game on Friday at Nick Denes Field. WKU defeated YSU, 5-3 on Feb. 19. Matt Lunsford/HERALD

The WKU baseball team traveled to Athens, Georgia, this past weekend for a three-game stint at the Bulldog Invitational.

The sweep improves the Toppers to 5-1, making John Pawlowski the first head coach since 1958 to win five of his first six games at WKU.

“The expectation coming in was to win all three,” Pawlowski said in a postgame radio interview. “When we came on the road, the biggest thing I told the team was that we needed to play hard and make sure we competed in every inning. The results were tremendous. I’m just proud of how we competed this weekend.”

The Toppers opened the Invitational on Friday against the University of Cincinnati.

Redshirt junior infielder Thomas Peter got things going against the Bearcats early, hitting a two-run home run in the third inning to give the Toppers an early 2-0 lead.

Shortly after, sophomore outfielder Kaleb Duckworth hit an RBI single to bring in senior infielder Danny Hudzina to extend the lead to 3-0.

Junior outfielder Paul Murray followed by roping a double, scoring Duckworth to cap off a four-score inning. The Bearcats scored two out of the last three runs, but it wasn’t enough as WKU held on for a 5-2 victory.

On Saturday the Toppers played former Sun Belt Conference foe South Alabama. The Toppers used a huge ninth inning to pull away from the Jaguars 11-10.

The two teams went back and forth at the plate as the Jaguars took an 8-7 lead going into the final inning. Junior catcher Hunter Wood hit an RBI single to tie the game.

Shortly after, freshman infielder Steven DiPuglia scored Wood on an RBI single to give the Toppers the lead. Murray capped the inning off with a double that scored two more runs to extend the lead to three.

South Alabama scored two runs to close the lead to one, but that was it as the Toppers held on for an 11-10 victory.

The Toppers capped the weekend off against host team Georgia. After the two teams went scoreless in the first inning, the Bulldogs made the game’s first big play.

However, the Toppers struck back as Georgia freshman pitcher Kevin Smith dug himself into a hole. After loading the bases, Smith walked redshirt junior infielder Leiff Clarkson to bring home Hudzina for the Toppers’ opening score.

Immediately after, DiPuglia was also walked to tie the game up at two. It wasn’t until the sixth inning that the 2-2 tie was broken.

Hudzina ripped an RBI double to score Kraft from first base to give the Toppers their first lead of the game. Shortly after, Georgia answered to tie the game up 3-3.

After giving up the tying run, senior pitcher John Harman came in to replace junior Ryan Thurston after a career day. Thurston finished with a career-high 10 strikeouts while giving up seven hits and three runs in just over five innings.

Thurston gave up one run in the sixth inning to give the lead back to the Bulldogs. Shortly after, the Bulldogs gave it up. A wild pitch allowed junior outfielder Paul Murray to come home to tie the game.

The two teams went back and forth until the bottom of the eighth inning, when the Bulldogs took a late 7-6.

In the top of the ninth, redshirt junior infielder Thomas Peter made the biggest play of the young season. The San Ramon, California, native hit a home run off Georgia Pitcher Bo Tucker to score Kraft and himself, putting the Toppers back in the lead.

“I was lucky to get a good pitch to hit,” Peter said about the game-winning home run. “It felt so good when I got back to the dugout with my teammates. We knew Kevin Elder was going to finish the job, and we were going to get the sweep.”

In the bottom of the ninth, redshirt junior pitcher Kevin Elder finished the Bulldogs off, striking out three straight batters to cap off the perfect 3-0 road trip.

“It was exciting that the two teams were going at it,” Pawlowski said. “Nobody flinched; nobody gave in. We were just fortunate that Thomas stepped up when he did. It was such a great game and a great weekend.”

The WKU baseball team will next travel to Nashville to play Belmont next Tuesday. The following day, Lipscomb University will travel to Bowling Green to take on the Toppers.