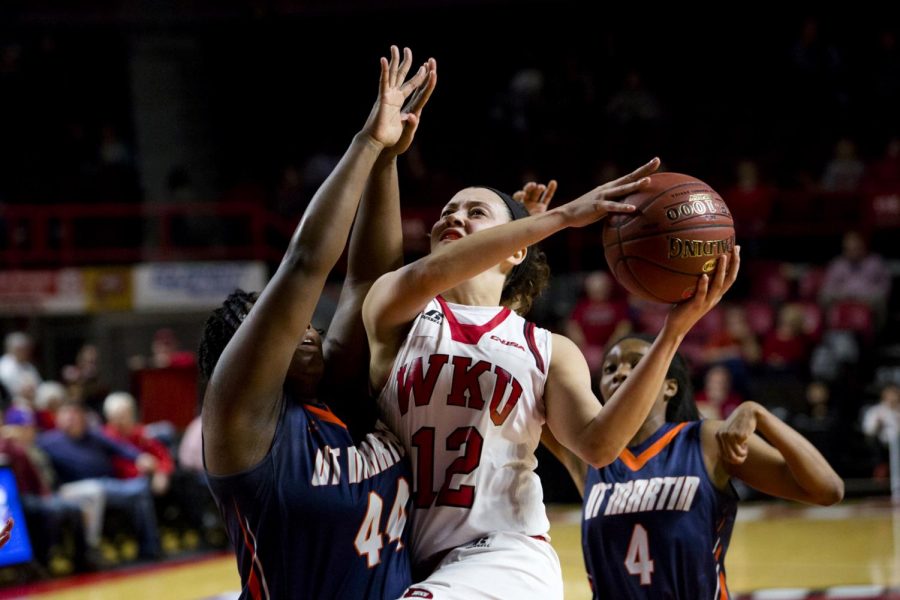 WKU's guard Kendall Noble (12) goes for two as Tennessee Martin guard/forward Shy Copney (44) defends during the second round of the NIT tournament between the Lady Topper and the Tennessee Martin Skyhawks on Monday March 21, 2016 at Diddle Arena in Bowling Green, Ky. Shaban Athuman/HERALD

The WKU women’s basketball team found itself in an unfamiliar situation when it trailed the University of Tennessee, Martin (22-9, 14-2 Ohio Valley Conference) 33-24 at halftime in Monday’s WNIT second-round game in Diddle Arena.

WKU held a 13-9 lead after one quarter of play, and then the Skyhawks went off from the 3-point line.

UT Martin hit five of its seven second-quarter 3-point attempts — compared to WKU’s 0-7 start from deep — which helped them build a 28-15 lead midway through the second quarter.

“We knew they weren’t second in the country in [3-pointers] for no reason,” Head Coach Michelle Clark-Heard said. “We were going to have to make sure we made some adjustments, and I was really proud of our group coming out of the locker room.”

The Lady Toppers battled back in the second half for a 64-57 victory and a spot in the Sweet Sixteen of the WNIT.

“I was just really proud of this group. We continued to find a way to fight and do the things we needed to figure it out,” Clark-Heard said. “They bought into everything we were talking about in the locker room, and I think it showed.”

“I challenged Kendall at halftime,” Clark-Heard said. “This group is very coachable, and that’s what I love about them.”

Sophomore guard Tashia Brown’s hot shooting was the only thing that kept WKU in the game.

“She was very important. She kept us in the game in the first half,” Noble said. “Nobody else could make a shot or was really trying to make a shot. She’s a big-time player, and that’s what they do.”

“Coach Heard kind of got on me and said I’ve been kind of sitting back lately and not being aggressive like I usually do,” Brown said. “She just wanted me to come out there and play my game.”

WKU outscored the Skyhawks 25-12 in the third quarter and felt the momentum switch was completely in the Lady Toppers’ favor.

“[Coach Heard] said that we weren’t guarding, and if we wanted to get beat then [we should] continue to not guard. We just had to come out here and bring some energy,” Brown said.

Noble went for 13 points in the third quarter alone and finished with 15 points, 12 assists and 8 rebounds to eventually threaten a third career triple-double.

“She almost had another triple-double. Kendall’s just great,” Brown said. “That’s just what she does. She’s a great all-around player, and I don’t know anybody else like her.”

The real story of the second half for WKU was the defensive intensity.

“They were getting some easy hooks in the first and second quarter, and we just wanted to make sure we bumped up the pressure and make sure we were guarding,” Clark-Heard said. “Our full-court zone press helped out a lot especially in that third quarter and helped us come back and get the lead.”

UT Martin committed 18 turnovers to just 10 by WKU and allowed the Lady Toppers to cash in on 19 points from those turnovers.

The win moved WKU to 26-6 overall and into the Sweet Sixteen of the WNIT. Up next for WKU will be a road game at St. Louis on Friday.

St. Louis boasts a 26-7 record on the season and is coming off a 59-55 victory over a Ball State team that defeated WKU in the season opener by a final score of 74-60.

The Billikens are led by Jackie Kemph, who averages 16.7 points per game. Kemph dropped 26 points and grabbed 13 rebounds against Ball State to help St. Louis get past the Cardinals in the final minute of play.

Ball State led by five with 1:08 to go, and then Kemph and company went on a 7-2 run to end the Cardinals’ season and advance to the Sweet Sixteen of the WNIT.

The Billikens held Ball State to just 29.6 percent from the field and held a marked advantage in the paint. St. Louis out-rebounded the Cardinals 48-38 and had 20 more points in the paint.

Tip time between the Lady Toppers and Billikens is set for 7 p.m. in St. Louis on Friday.