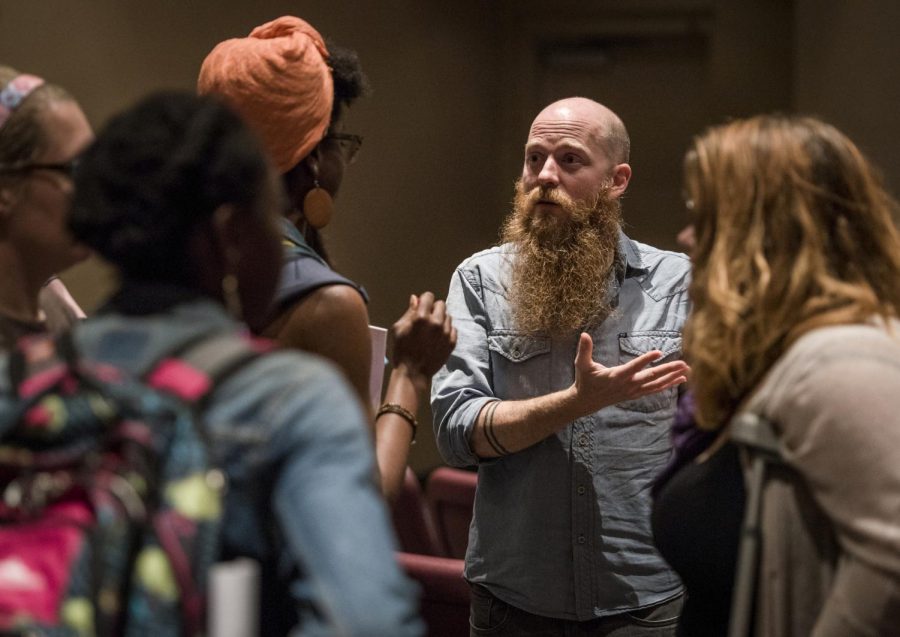 WKU alumnus Chad Stevens speaks with students in the MMTH auditorium following the first viewing of his recent documentary "Overburden" in his home town of Bowling Green, on March 15. The award winning films delves into the issues of mountain top removal and the unsustainability of strictly "Coal Country" that is found in much of Appalachia. Gabriel Scarlett/HERALD

The term “overburden” is used for the rock, soil, trees and ecosystem that lie above a coal seam. It is also the title of Chad Stevens’ documentary about environmental devastation in the Appalachian coal mining region and the effect it has had on the area’s surrounding communities.

Before the viewing, Stevens recounted the experience that inspired him to begin the project.

“That was the moment that changed me,” Stevens said.

After observing such destruction of the earth firsthand, Stevens said he was led to create the film.

The two women initially contrast politically regarding coal mining. One of the women, Lorelei Scarbro, is an environmental activist who worked tirelessly to put a stop to the destruction caused by coal mining. The other, Betty Harrah, is pro-coal and believes there is no alternative to the industry because of its economic influence.

However, a devastating explosion in one of the mines brought the two women together in protest against the coal company responsible for the deaths of 29 men in their community.

Mountaintop removal was Stevens’ inspiration to begin the project and played an important role in the documentary, but Stevens said the project evolved tremendously from this primary idea.

In the film, Scarbro works alongside researchers to find wind power alternatives to coal. However, her primary motivation to put a stop to coal-mining destruction is not derived from her desire to protect the environment. Stevens said Scarbro told him she was doing it for her grandchildren.

Family is something many people will fight for; both Scarbro and Harrah make this clear as they share their stories. Although the coal industry is destroying the land surrounding the homes and communities of both of these women, it also provides their family members’ jobs and welfare.

CatyBeth Gooding, Lexington freshman, attended the screening and said she was reminded of her trip to eastern Kentucky last summer. Gooding said she met people whose family members worked in the mines, and she had the opportunity to hear their stories.

“Most of them seemed to be very positive about it,” Gooding said, “but they would also talk about how dangerous it was.”

The film not only portrays environmental devastation but also highlights the risks that threaten coal miners and their families. Scarbro’s husband died of black lung disease as a result of work in the mines, and Harrah’s brother was killed in the Upper Big Branch mine explosion.

“Overburden” captured Scarbro’s work alongside researchers to advocate use of wind-powered energy instead of coal. Gooding said she hadn’t realized how attainable these alternative sources of energy could be before she watched the movie.

“I think a lot of people are in the same position I was,” Gooding said. She said she was aware of the conflict between environmentalists and those who earned their living through mining.

“Many people don’t understand there are other options and how reachable those alternative power sources can be,” Gooding said.

Olivia Santangelo, Crescent Springs freshman, said she didn’t realize how large an impact coal companies had on the destruction of mountains and how many people were affected by it until she watched the film.

“I knew it was happening; I just didn’t know how large of a scale it was,” Santangelo said.

Santangelo, a geology major, said she’s always had a passion for exploring the earth and protecting it.