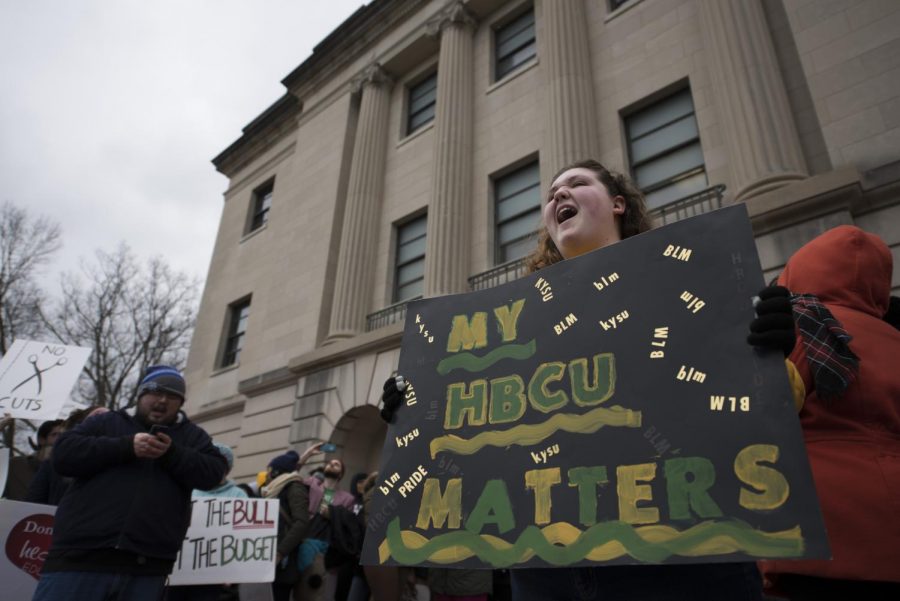 Kentucky State University sophomore Kelsey McCormick holds a sign during the March for Higher Education on Thursday on the steps of the Kentucky State Capital Annex in Frankfort. The march was to protest Gov. Matt Bevin's proposed budget which calls for a 9 percent reduction in state funding for public universities. Mike Clark/HERALD

About 100 students from Kentucky’s public universities marched from Kentucky State University in Frankfort to the State Capitol Thursday morning as part of the March for Higher Education.

The march was to protest the 9 percent across-the-board budget cuts to higher education that Gov. Matt Bevin proposed during his Jan. 26 State of the Commonwealth Address.

Murray State junior Emily Ferguson, who helped organize the event, said she left Murray at 5 a.m. to attend the march four hours away.

“We hope to let the legislators know we are here and we care,” Ferguson said.

After reaching the capital, the students took turns speaking on the steps of the Capitol Annex building. Kentucky State University sophomore Kelsey McCormick, a music education major, said she was worried her program would face cuts.

McCormick is also worried her two younger sisters might not have the same educational opportunities she has had.

“They may not be able to follow their dreams in the state of Kentucky,” McCormick said.

One of the students’ concerns was that college departments in the arts and humanities would feel the budget cuts most.

During Bevin’s address, the governor said he wanted to focus on graduating students with degrees in “things people want.”

“There will be more incentives to electrical engineers than French literature majors,” Bevin said.

Murray State assistant professor of costume design Heidi Ortega came to support the protest and said she was concerned about how the budget might affect her job.

“I go to work; I’m the breadwinner. It’s my livelihood,” Ortega said.

Neal encouraged the protesters to “be heard from Pikeville to Paducah” and to stop by the Governor’s Mansion.

“I appreciate that you are here, but you are preaching to the choir,” Neal said. “We are determined that these cuts won’t happen.”

In addition to the protest, both President Gary Ransdell and members of WKU’s Student Government Association have traveled to Frankfort in the past week to lobby against the budget cuts.

The state house is expected to finalize their version of the budget in the coming weeks.