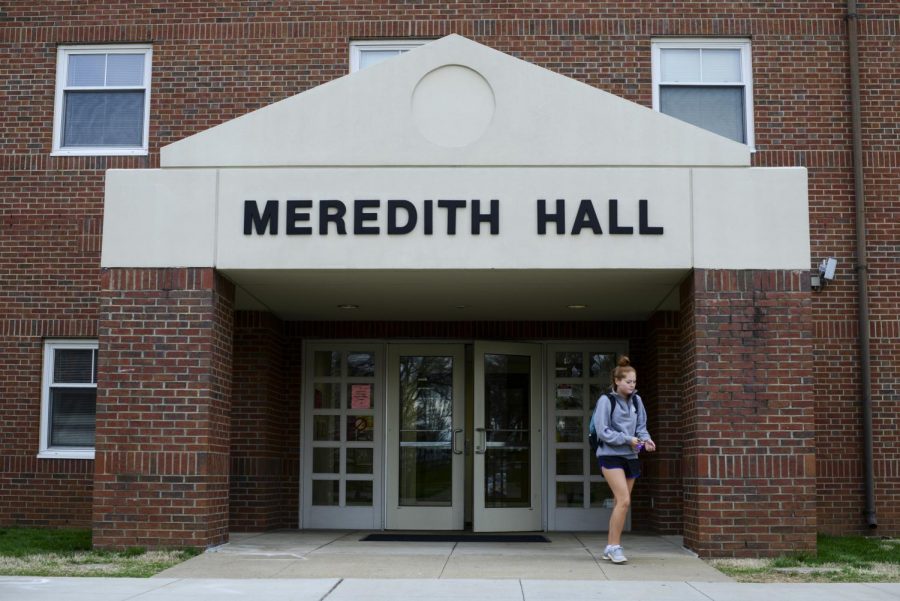 A student leaves Meredith Hall Thursday morning, March 24. Three sororities have their own floor in the building. Abby Potter/HERALD

Not all sororities at WKU have a large house full of rooms ready for all its members like some sororities might have at bigger universities. One residence hall in particular is designated for sororities with small chapter houses to give members a similar experience to living in the house.

Margo Grace, WKU Phi Mu alumna and president of the housing corporation for Phi Mu, uses funds to purchase a section of Meredith to be home to 44 Phi Mu members every year.

Fort Thomas sophomore Laura Bunning serves as housing chairwoman for WKU’s Phi Mu chapter and has lived in both Meredith and the Phi Mu house. Bunning moved into Meredith in the spring of her freshman year and continued to live there through the fall of her sophomore year.

“Living in Meredith brought me closer to people I wouldn’t have met otherwise,” Bunning said. “It made the difference in me from kind of feeling lost in the fall of my freshman year to being so excited to get back to school after summer by the end of the spring.”

Phi Mus are required to live in some form of Phi Mu housing for two semesters. Only eight spots for members of the Executive Board are available in the Phi Mu house, Bunning said, adding that Meredith provides a great opportunity for members to bond with sisters in their pledge class and with those in later classes.

Meredith Hall is set up suite style with four people to a suite, two people to a room and a bathroom that connects the two rooms. There is a study room on every floor and kitchens available as well.

Living in Meredith brought me closer to people I wouldn’t have met otherwise.

The biggest difference for Bunning is the use of a kitchen, which she didn’t use in Meredith but now utilizes frequently in the Phi Mu house.

“Living in the Phi Mu house allows you to get closer to people you might not have been close to in the chapter, Bunning said.

Bunning said living in Meredith is also great because if you’re having a bad day, you can walk in and open any door and be consoled, and members know you would do the same for them.

“With dorm life, you can also expect to have plumbing and electricity issues, which you think would be a deficit, but not necessarily,” Bunning said as she recalled one of her favorite memories from living in Meredith.

Bunning and her suitemates, whom she didn’t know well at the time, were up talking when they realized their sinks were filling up with water at 2 a.m. They had to have a resident assistant in their room to help fix the issue, which wasn’t resolved until 3 a.m. But Bunning said it’s things like that — the issues and funny problems that only happen in a dorm — that allow you to bond. She said those suitemates are now some of her best friends.

Elizabethtown junior Kristina Gonzalez-Lopez went through informal recruitment and joined Phi Mu in the spring of 2014. She has experienced life in both Meredith and the Phi Mu house and agrees that while the house has more places to nap and fewer closets, it was great to live next to and get to know so many sisters in Meredith.

“Meredith is definitely a once in a lifetime opportunity,” Gonzalez-Lopez said. “We’re not like bigger universities like Alabama or [the University of Kentucky] where they have big sorority houses; our house only holds eight people. So Meredith made up for that and gave me the opportunity to have a similar experience.”