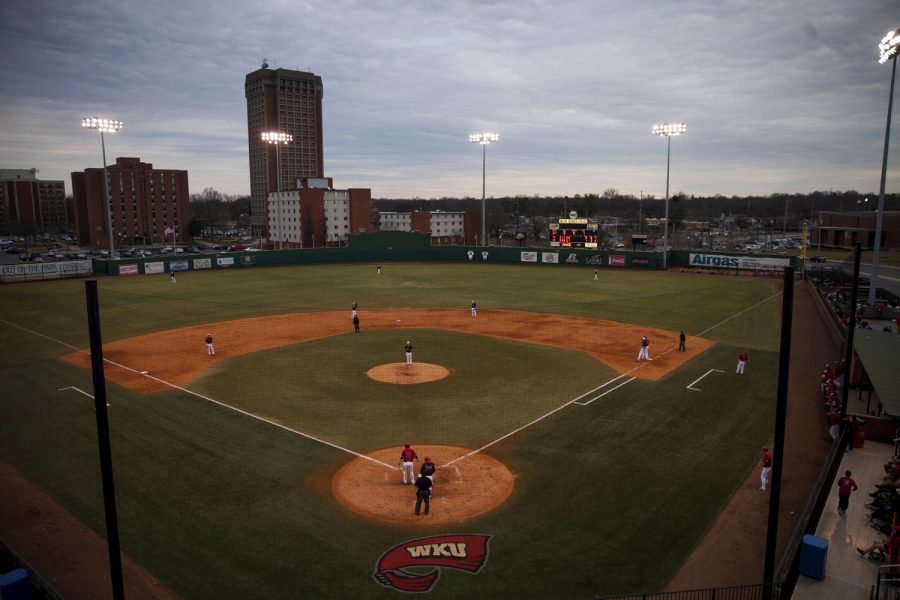 The WKU baseball team hosted Lipscomb Wednesday afternoon as the Bisons (6-3) and Hilltoppers (7-1) were both looking for key non-conference victories. However, the Bisons struggled to get hits off Bowling Green natives Josh Bartley and Jackson Sowell as the Hilltoppers cruised to a 6-0 victory to improve to 7-1 on the season.

“Its a great feeling,” senior pitcher Josh Bartley said. “Our hitters are backing us up. Our pitchers came out and set the tone. It just feels good to have another quality win under our belt so far.”

After a scoreless first inning, sophomore outfielder Kaleb Duckworth made the game’s first big play from the plate for the Hilltoppers. The former Kentucky Mr. Baseball winner hit a solo home-run to left field to give the Hilltoppers the early 1-0 lead.

Junior outfielder Zach Janes helped add to the lead in the 2nd inning. Janes’ single with the bases loaded scored graduate student catcher Ty Downing and redshirt junior infielder Leiff Clarkson to extend the lead to 3-0 over the Bisons.

The Bisons struggled to get the bats going against the Hilltopper pitchers. Bartley pitched six innings, giving up four hits with no runs with a 1.74 ERA.

“I felt good about the way I pitched. When you have a three run lead after two innings it takes a lot of pressure off of me. Hats off to the hitters,” Bartley said.

After Bartley’s day was done, the Hilltoppers added to their lead. Downing’s RBI double in the bottom of the sixth inning scored Duckworth for his second run of the game, making the score 4-0.

Redshirt junior pitcher Jackson Sowell came in to finish the shutout for the Hilltoppers. The Bowling Green High School graduate allowed just one hit in 2.2 innings as the closer.

It wasn’t until the bottom of the eighth inning that the Hilltoppers got their final two runs. Downing’s sacrifice bunt allowed sophomore outfielder Grant Malott to sneak home from third base to extend the lead to 5-0. Soon after, freshman infielder Steven DiPuglia hit an RBI single to score Clarkson for the game’s final score.

The WKU Baseball team will travel to Jacksonville, Alabama on Friday for a three game series against Jacksonville State (3-4).