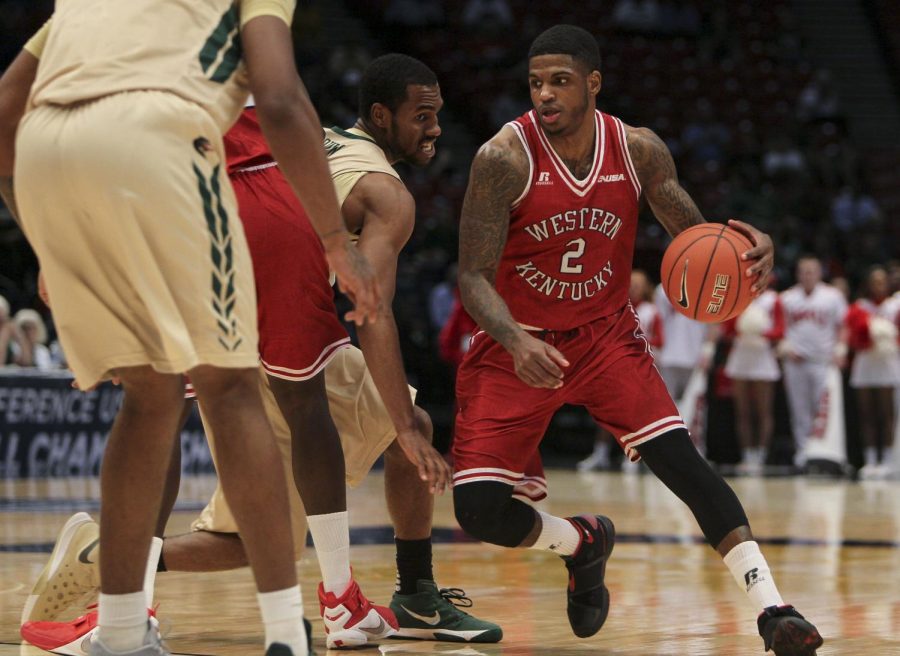 WKU's guard Aaron Cosby (2) drives down the lane to the basket through heavy UAB defense in the C-USA tournament. The Hilltoppers are up 39-28 at the half. Lex Selig/HERALD

The WKU men’s basketball team took the floor against the University of Alabama, Birmingham on Thursday after Head Coach Ray Harper said that he and his team wanted to see UAB this week.

The Tops got what they asked for after taking down the Mean Green of North Texas in their first game of the Conference USA tournament.

The Toppers had a split record with the Blazers this season, with each team winning one game on their home floor. WKU looked like a team that was on a mission to get to the NCAA tournament as soon as they stepped on the court, and carried that momentum into an 88-77 victory over the top-seeded Blazers.

The Hilltoppers were able to take the game right to UAB in the first half. Sophomore forward Justin Johnson led the team in scoring as his teammates fed him the ball in the post successfully. Johnson nearly had a double-double in the first half with nine points and eight rebounds.

“I’m here to get a ring and that’s what I want,” Johnson said.

The Tops were able to go up by as many as 11 points in the first half while shooting 45 percent from the field.

In the second half the Blazers came out to score the first five points to make the score 39-33, but the Tops scored six quick baskets of their own.

WKU shot even better in the second half, going 60 percent from the field.

After the game, WKU players spoke about the big win, but emphasized that their tournament journey wasn’t over yet.

“It means the world, but it’s not the championship game,” junior forward Ben Lawson said.

“Fred sat most of the first half but came out in the second half and was fearless again, and Nigel was in attack mode. When he’s in attack mode, he’s dangerous for a lot of people. When we get in the paint, good things happen for us,” Johnson said.

Johnson put together his 10th double-double of the season finishing with 14 points and 15 rebounds. Redshirt senior guard Aaron Cosby put up 12 points and Lawson added 10 of his own.

WKU will face off against the Monarchs of Old Dominion tomorrow at 3 p.m. in the semifinals of the CUSA tournament.