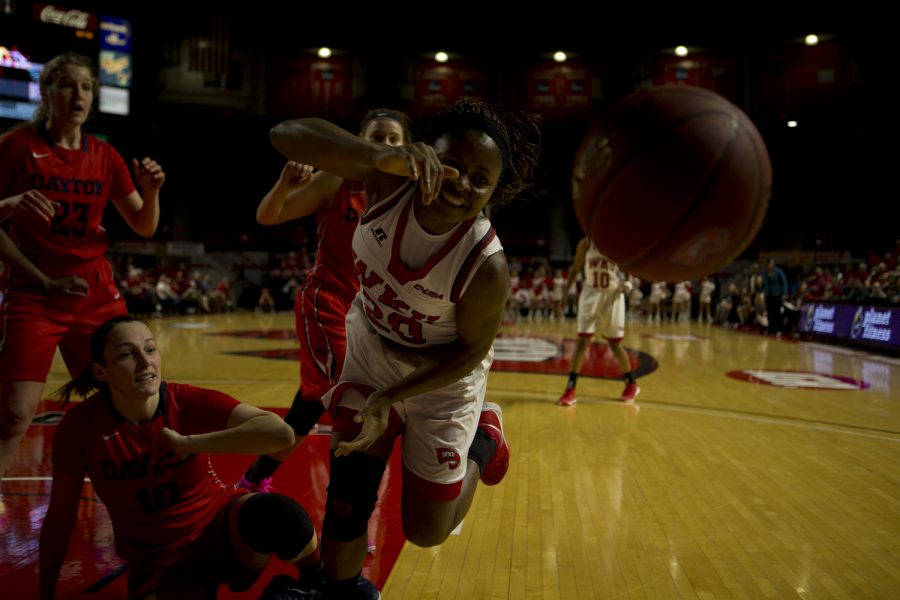 Junior guard Ima Akpan tumbles towards the baseline chasing after the ball.The WKU Lady Toppers basketball team take on the University of Dayton Lady Flyers in the first round of the NIT tournament at Diddle Arena in Bowling Green, Ky on Thursday, Mar. 17, 2016. Matt Lunsford/Herald

Kendall Noble, Tashia Brown, Ivy Brown and Jalyyn McClain combined for 72 of WKU’s 78 points on Friday in St. Louis. But none of the four Lady Toppers who scored in double figures were credited with the most important three points of WKU’s 78-76 overtime victory over St. Louis in the Sweet Sixteen of the WNIT.

Freshman guard Sidnee Bopp had scored nine field goals all season long and averages 1.2 points per game in about eight minutes of action per contest.

But none of that mattered after she banged home the buzzer-beating three-pointer from the corner to lift WKU over St. Louis and put them in the Elite Eight of the WNIT.

“That’s a good team that we played,” St. Louis head coach Lisa Stone said in a postgame radio interview. “It was a game that could’ve gone either way. I’m very very proud of our players. Congratulations to Western Kentucky. That’s a really good team.”

Friday’s contest featured both teams holding double-digit leads for extended periods of times with eight lead changes in between.

The game began with WKU opening up a 10-0 lead over the first three and a half minutes.

The Billikens came back to tie the game at 18 near the end of the first quarter, and eventually went on to hold a 38-30 at halftime.

St. Louis guard Sadie Stipanovich sent the game to overtime with two free throws with 2.1 on the clock in regulation.

But then Bopp came up with the biggest shot of her life to keep WKU’s season alive.

“It’s been a great year,” Stone said. “I’m so proud of them, they don’t need to hang their heads.”