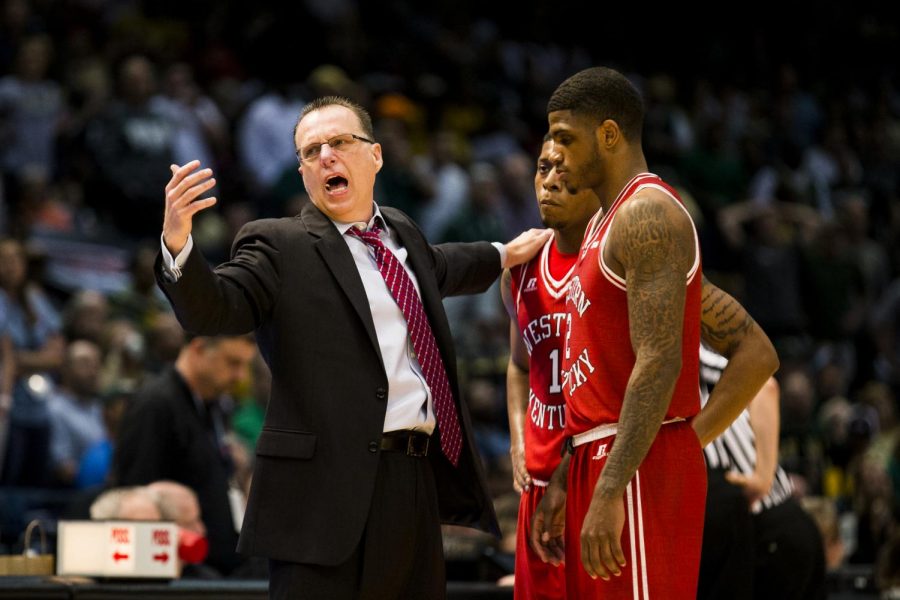 WKU's head coach Ray Harper calls the team together during a timeout in the Hilltopper's 88-77 win over UAB in the quarterfinals of the C-USA tournament Thursday at Legacy Arena in Birmingham, Ala. The win over the top seeded Blazers advances WKU to the semifinals where they will face either LA Tech or ODU at 3 p.m. Thursday. Mike Clark/HERALD

UPDATE March 18, 10:41 a.m.: The Herald has confirmed with WKU that all three suspended players are still currently enrolled at the university. Zach Greenwell of the Bowling Green Daily News and Chad Bishop of WBKO have both confirmed that the suspensions are neither academic nor NCAA related.

The Herald has filed multiple open records requests related to this story and will continue to update our coverage as we obtain more information.

According to a statement released by WKU, men’s basketball coach Ray Harper has resigned from the program effective immediately.

“Federal law prevents us from public discussion of any details related to student disciplinary cases,” Athletic Director Todd Stewart said in a statement.

“Earlier today, I informed Todd Stewart that I was resigning as WKU head men’s basketball coach,” Harper said in a statement released by WKU. “I feel this is in the best interests of the program; a program I care deeply about. It has been a true honor being a part of this historic program, as both a head coach and assistant coach.”