Lady Tops drop first game in Diddle on the season 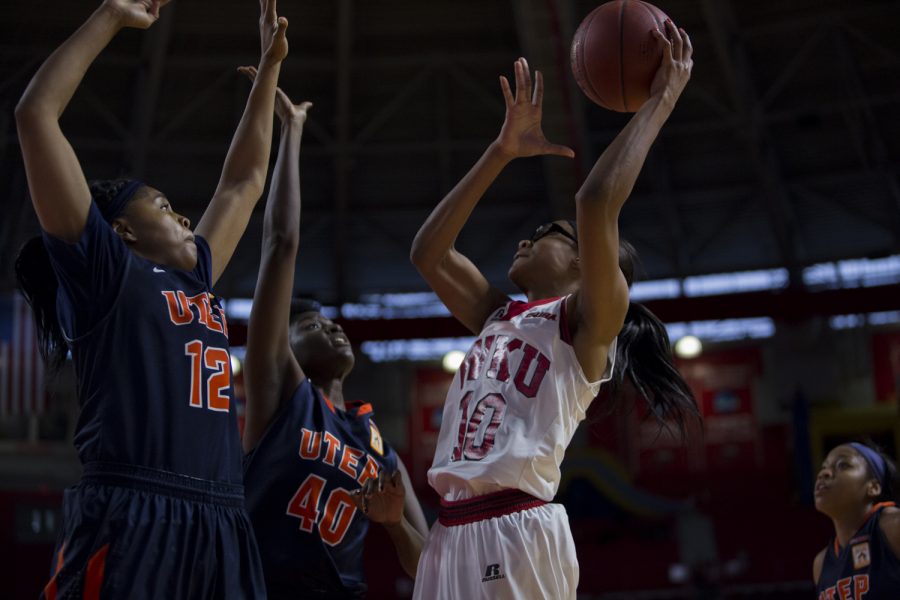 A lot was on the line in Saturday’s contest as the top two squads in Conference USA – WKU and University of Texas, El Paso – were both trying to take sole possession of first place in the conference.

In a physical battle between two C-USA powerhouses, the Lady Tops fell to the Miners by a final score of 85-78.

“We knew it was going to be a ballgame,” Head Coach Michelle-Clark-Heard said. “They’re a very good basketball team. We’re going to continue to keep working so we can be the best, and this is a process and I understand that.

Sophomore guard Tashia Brown did everything she could and then some to put her team in a position to win. At halftime, the sophomore had 21 points and was shooting 70 percent from the field. Brown finished the game with 29 points on 64.7 percent shooting for the game.

“[Tashia] was just incredible,” Clark-Heard said. “I was really proud of her because she’s stepping up and being in a role that she’s not used to. She has wanted to be in that position with her and Kendall [Noble] doing whatever they need to do for this team.”

The physicality of the game was something the Lady Tops expected and fought through to give them a chance.

“It was definitely physical,” junior guard Kendall Noble said. “They were trapping on ball screens and slapping everything but we knew they were going to do that.”

UTEP made more plays in crunch time and WKU turned it over four times in the final 41 seconds of play.

“It’s pretty disappointing,” Noble said. “We had the game right in our hands and we had turnovers and gave up two threes at the end and let it get away.”

The score was tied only once, but featured seven lead changes. Junior guard Ima Akpan spurred a 7-0 run with just outside three minutes remaining to give the Lady Tops a one-point lead. Akpan scored seven points in 11 minutes.

“It was crucial for us. We need Ima to continue to keep stepping up,” Clark-Heard said. “That was one of the reasons why we signed Ima. She’s a junior and she’s a winner.”

The other double-digit scorers for WKU were sophomore forward Ivy Brown and Noble. Brown had 12 points and nine rebounds, and Noble threatened a triple-double again, posting 12 points, 8 assists and 8 rebounds.

The loss marked WKU’s first home loss on the season.

“One of my goals was to not lose here at home so I’m devastated about that.” Clark-Heard said. “Now we just got to get back and get focused and get them in the gym and correct the things we need to, so when we go on the road next week, we’ll be ready.”

Despite the loss, the atmosphere of Diddle Arena during the game stood out to Clark-Heard.

“It was great. The crowd was into it, the game was going back and forth and I think that our kids really fed off of it,” Clark-Heard said.

The Lady Tops don’t play UTEP again in the regular season, but there is a possibility that these two teams will meet in the C-USA tournament in March.

“I think we’ll be looking forward to that game for sure, but we have to worry about the other ones,” Noble said. “You can’t dwell on this, you have to come back ready to practice and get better.”

The next game on the slate for WKU is a road game at Marshall University on Feb. 14. Marshall knocked off UTEP 79-64 at home on Thursday evening.