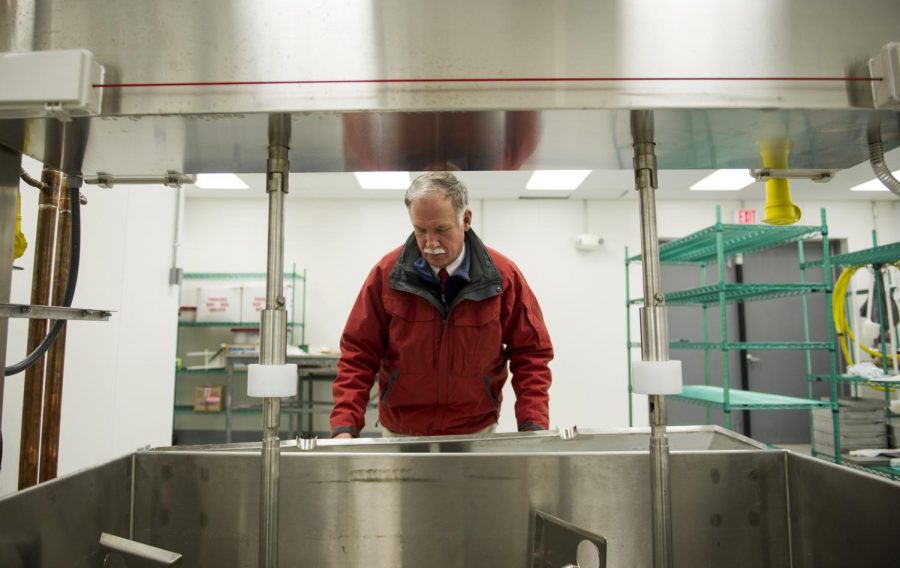 Jack Rudolph, a professor of agricultural education at WKU, removes a cover to the cheese vat at the Taylor Center on WKU's farm in Bowling Green, Kentucky, on Monday, Feb. 22, 2016. Rudolph's "brain child" is finally coming to fruition after the project to produce cheese at the farm came about six years ago. Rudolph and the agricultural department received a grant totaling $250,000 from the Kentucky Ag Development Fund to start the cheese production facility under an agreement to provide Kentucky farmers a means to explore the opportunity of producing cheese in their farming operations. Nick Wagner/HERALD

A cheese production facility located in the Taylor Center on WKU’s University Farm is expected to be completed early this March.

The cheese lab, which has been in the works for about four years, is the brainchild of Jack Rudolph, a professor of Agricultural Education.

“The idea was that we could be a small dairy and we could show in a real way that it would pay — that you could do this, and you wouldn’t have to go into the cheese business and then decide, ‘Wow, I don’t want to do this,’” Rudolph said.

Rudolph said small dairy farmers have a difficult time making money because of fluctuations in milk prices. When prices are lower, the difficulty increases — especially when feed costs, electricity and other production needs are factored in the equation.

One way dairy farmers save money is by using their families for labor rather than hiring other employees, but even that method has its downsides.

“If it’s his labor, his family’s labor, then they end up working a lot of hours and not having a lot to show for it,” Rudolph said.

The dairy farmers’ difficulties inspired Rudolph to look into building a cheese lab. He believes that if dairy farmers are able to make and sell a product made from their milk, then they will be able to increase their income.

“We wanted to show people that you could make money and make a small dairy product,” Rudolph said.

After looking at numerous milk products, Rudolph settled on cheese because of its long shelf life and easy shipping abilities. He also had examples of other university cheese labs to support his idea.

Numerous universities across the nation have cheese production facilities that train students in food science and in making money from cheese sales.

Mississippi State University is one such institution. Cheese production there began in 1938 with just a small amount of product each year. The facilities have since expanded to produce enough cheese to sell to the general public and to ship all over the country to alumni and other customers.

Troy Weaver, manager of the Sale Store at MSU, said the business is extremely successful.

“We sell every bit of the cheese we can make,” Weaver said.

The success of MSU and other universities, research-based evidence of profitability, and the small number of on-farm cheese producers in Kentucky convinced Rudolph that cheese was the ideal product for WKU.

According to statistics from the Kentucky Dairy Development Council, at the beginning of 2015 there were 714 dairy farms in the state. Only six of those farms are on-farm cheese producers, so Rudolph believes the market is wide open.

From the conception of Rudolph’s idea to now, progress on the project has been slow. Partial funding came from a $250,000 grant from the Kentucky Agriculture Development Fund. The rest of the money came from inside the agriculture department.

“We were really struggling to get this off the ground,” Rudolph said.

In addition to installing the machinery for a cheese lab, Rudolph also had to apply for a milk hauler’s license. The license is necessary for hauling milk from the dairy barn to the Taylor Center. Rudolph estimated that the distance is only about 150 yards.

“We had to pay $8,000 to get a special tank made that goes in the back of a pickup to bring the milk that short distance from the dairy barn up to the Taylor Center,” Rudolph said.

Despite the lengthy process, the project is nearly finished.

Ben Johnson, assistant director of planning, design and construction, said construction is complete. Testing the equipment and training the staff are all that remain to be done.

“We’re looking at doing an equipment startup with the contractors to make sure it all works Thursday, March 3,” Johnson said.

A training session to teach the staff how to properly use the equipment is scheduled to be held on Friday, March 4.

Rudolph hopes production will begin shortly after the training session. Once production begins and cheese from WKU’s dairy cows has been successfully produced, the facility will begin extending invitations to one or two dairy farmers.

According to Rudolph, another benefit of owning a cheese production facility is the amount of employment opportunities it provides. From start to finish, the process requires someone to milk the cows, someone to produce the cheese and someone to market the product.

“You could have three or four kids out of the same family, and all of them could make a living if you have a really good value-added product,” Rudolph said.

Dairy farmers’ interest in the facility has begun to wane. However, Rudolph believes this is due to how long the project has taken to reach completion.

“It’s drug out so long that I think people thought, ‘Well, they’re never going to get it off the ground,’” Rudolph said.

He said interest in the project will probably grow after cheese made from WKU’s milk is successfully produced and sold.

“After [March 1], it seems like all the road blocks will be out of the way,” Rudolph said. “It seems reasonable to think that we’re going to see some cheese before the end of the school year.”