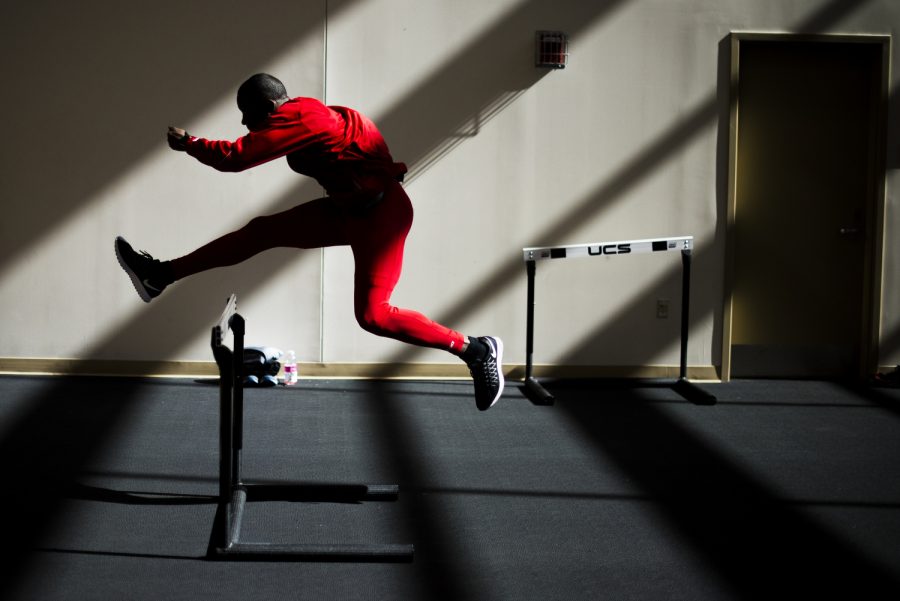 West Palm Beach, Fla. sophomore Jonathon Hayden practices hurdles before his race in the finals of the men's 60 meter hurdles at the Music City Challenge in Nashville, Tenn. February 13, 2016. Hayden went on to finish fifth with a time of 8.09 seconds. Justin Gilliland/HERALD

The WKU track and field program continued this season’s trend of wins after the Music City Challenge in Nashville concluded with four first-place finishes and 12 top-three finishes for the team.

The meet began on Friday, Feb. 12, and concluded on Saturday, Feb. 13, at the Vanderbilt Multipurpose Facility.

The men and women’s track and field teams have become familiar with this setting and have seen an increasingly successful season thus far.

“The meet went well,” Head Coach Erik Jenkins said. “A lot of solid performances across the board. We had some positive things going forward in the meet.”

Continuing to rack up the wins for track, juniors Carrol Hardy and Emmanuel Dasor finished the weekend with top spot victories.

According to the results posted on WKUsports.com, Hardy was awarded with two top-three finishes.

“I think Carrol went out and ran a good race,” Jenkins said.

Sophomore Julius Morris ran close behind Dasor and finished with a time of 21.38, good for second place.

Other athletes who gave notable efforts toward the track team’s success this weekend include sophomores Peli Alzola, Kyree King and Vincent Wyatt. All three team members placed in the top-three spots.

“She had a very good weekend,” Jenkins said. “I was very, very happy with her.”

King grabbed first place for the men’s 60-meter dash with 6.81, and Wyatt clocked his best time since being at WKU with second place in the 60-meter dash at 7.76.

Akachukwu’s winning high jump of 1.72 meters was a season best and .01 meters away from her career best from 2014.

Jackson came through with two third-place spots, one in weight throw at 18.38 meters as well as shot put at 14.83 meters.

Coach Jenkins praised Ventavius Sears’ performance in the field events. Jenkins said Sears only took half of his allotted jumps and made a good mark.

Next Saturday, WKU will travel to South Bend, Indiana, to participate in the Alex Wilson Invitational. This will be the last meet before the Conference USA Indoor Championships begin on Feb. 24 in Birmingham, Alabama.

“Right now we just want to stay healthy, stay humble and stay determined at what we’re trying to accomplish, which is to go in [and] win conference championship.” Jenkins said. “Notre Dame will provide a final tuneup for some individuals.”