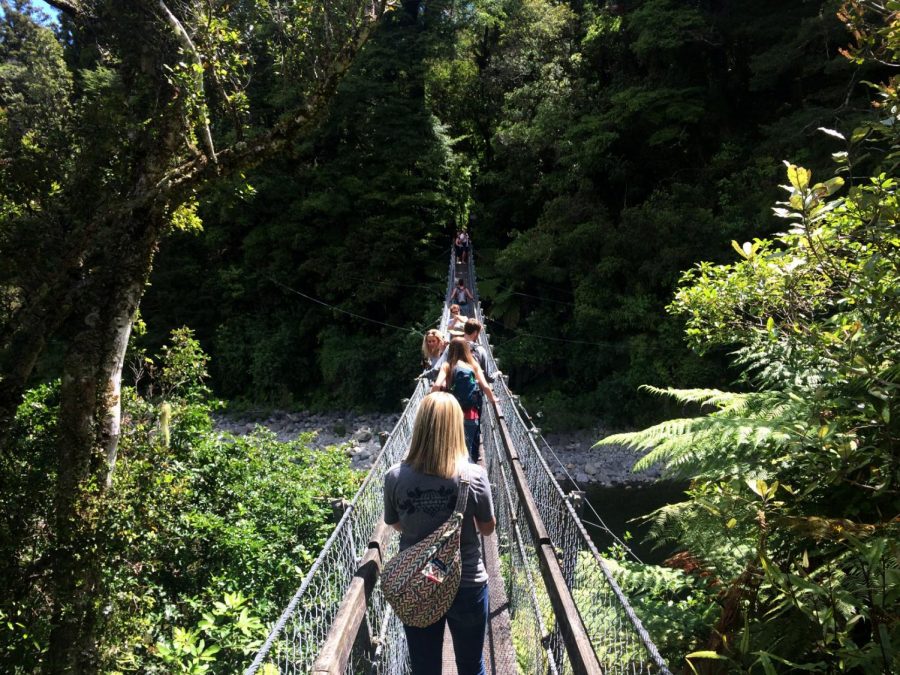 Students on a winter break study abroasd trip to New Zealand viisted the “Rivendell “ filming location from the Lord of the Rings films. A group of WKU students spent 15 days traversing the country. Photo submitted by Nina Wells

WKU sends students abroad every semester, which has a huge impact on WKU’s achievement of being a leading university and maintaining international reach.

By offering destinations in regions around the world, WKU’s study abroad programs give students many options to choose an experience that best serves their needs. Despite these opportunities, however, many students are hesitant to consider study abroad because of expenses.

Katherine Hale, interim assistant director at the Office of Study Abroad and Global Learning, said study abroad can be affordable for anyone as long as the student is willing to work hard in advance to apply for funding and to be flexible when choosing a destination.

“You might be surprised to know that there are programs that cost the same as a semester or summer term at WKU,” Hale said. She added that choosing a destination such as Latin America or Asia instead of Europe can make a trip much more affordable.

“More important than destination, though, is considering what you want to gain from the experience and whether the program can meet your academic goals and needs,” Hale said.

Hale said some of the most expensive places to study abroad include Australia, New Zealand, western Europe and trips like the Semester at Sea program that cover multiple countries.

Jessica Canada, Williamsburg senior, went on the Semester at Sea voyage during the fall 2013 semester. Although it is one of the costliest programs offered, Canada said she was able to save enough money to pay for the trip and only had to take out a small loan for spending money.

“I tried a lot of different things,” Canada said.

One of the options she tried involved setting up a GoFundMe account; she had heard of other students using the tool to raise money for their trips.

Canada said she also babysat and saved money she’d earned by working, but in the end, the 20 or 30 scholarships she applied for were the biggest help in covering her trip’s cost.

“I spent months and months applying for scholarships,” Canada said. “It’s very stressful until you start hearing back about your applications.”

Although Canada said she isn’t very crafty, she knew of students who sold art, homemade food and other goods to raise money.

“I know some students who sold calendars to friends and family before their trip,” she said, “and when they got back, they chose 12 of their best photos from the trip and made a calendar to hand out.”

Simone Smith, a graduate student from Indianapolis, found a way to use her talents to save money for her trip to China during the 2016 winter term. Smith said she has a passion for cooking and was able to raise almost $900 in just a few months by selling food with a friend.

“At times we were up until two or three in the morning,” Smith said.

She recounted how she and her friend sold a variety of cupcakes made from scratch, catered events and sold home-cooked plates of food.

Smith said she has seen some people turned away from study abroad opportunities because of the price but believes if students are willing to work hard, these opportunities are well within reach.

Canada said she was glad she picked WKU after her Semester at Sea experience because the university assisted her so helpfully when she applied for scholarships.

Canada is now a student representative at SAGL. She said her tasks include helping other students find out which scholarships they are eligible to pursue.

She said the office has an entire packet of scholarships available and can help students find several to apply for by walking them through the possibilities.

“I think we’re very fortunate that we attend a university that sees the value in getting a global perspective,” she explained. She said study abroad provides a more meaningful experience than just tourism because it teaches students how to interact with different cultures.

Canada said her study abroad experience was addictive. Before she boarded the ship for Semester at Sea, she thought it would be the only time she would travel outside the U.S. However, she has already returned to South Africa, a country she deeply enjoyed when she visited in 2013.

“Once the world opens up to you, it’s always open,” Canada said.