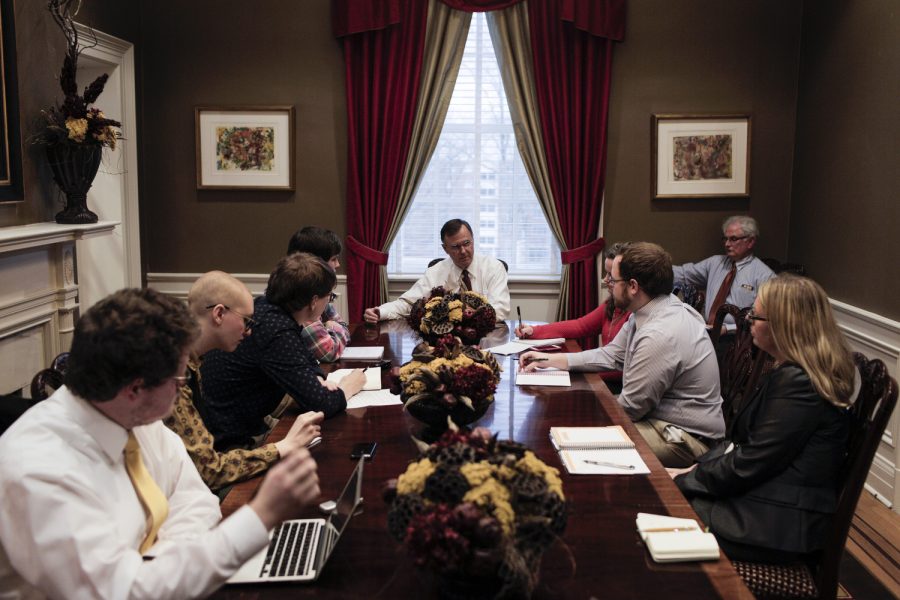 President Gary Ransdell speaks with the editorial staff of the College Heights Herald on Tuesday on the main topic of his retirement and a few things to come in the near future. This included discussion on budget cuts, the upcoming presidential search and a possible tuition increase for students. "Students should expect a tuition increase almost every year," explains Ransdell, "there will be a three percent tuition increase next year based on the university budget." Lex Selig/HERALD

Members of the Herald editorial board sat down with President Ransdell on Tuesday to discuss a variety of issues. Topics ranged from his recent retirement announcement to looming budget cuts and much more. Here are some of the highlights of our discussion.

At Friday’s Board of Regents meeting, Ransdell announced his retirement effective June 30, 2017. He said the response to his retirement has been gratifying and overwhelming.

“I’ve heard from a lot of students and parents of students expressing disappointment that they won’t get their degree from me at commencement,” he said. “That’s pretty neat.”

On the topic of the upcoming presidential search, Ransdell said that while the Board of Regents will direct the search for his successor, he expects the various campus constituencies, including faculty, staff, students, community members and alumni, to be represented on the committee.

Ransdell also addressed a statement he made in an email to faculty and staff on Friday in which he said he would “spend whatever political capital I may have built up over the years in pursuit of what higher education needs in both dollars and knowledge of our values.”

He said while he won’t offend anyone or leave his successor in a bad position, he does feel his impending retirement will allow him to act more boldly in Frankfort during the upcoming debates over Gov. Matt Bevin’s budget proposals.

“This is going to be my last shot at a budget that affects my university,” Ransdell said. “And I’m not above [saying] ‘help us out.’ I probably wouldn’t take that position if I were here for many more [legislative] sessions going forward. That’s a card you can only play once.”

As previously reported in the Herald, WKU is currently facing 4.5 percent in immediate budget cuts handed down via executive order from Gov. Bevin. These cuts must be finalized by June 30. When asked whether students can expect a tuition increase in the wake of these cuts, Ransdell said yes.

“I think students should expect some tuition increase every year,” he said. “The financial practicality — the pragmatic dollars and cents — does not lend itself to no tuition increase.”

However, Ransdell said that while the university will proceed as if the upcoming budget cuts will be sustained, he does not expect the university to make up that deficit completely with a tuition increase.

When asked about whether salary increases for faculty and staff are possible soon, Ransdell said yes.

“It simply compounds the measure of our challenge,” he said, “and a salary increase, no matter what it is, is going to be modest. But doing a salary increase of some kind is still a very high priority.”

“I don’t see people volunteering to take a salary cut in order to meet a budget reduction, nor would I ask anyone to do that,” he said.

In terms of program cuts to cope with the budget cuts, Ransdell said he didn’t have an answer for that right now.

“I will say that it is not my intention to have an across-the-board approach,” he said of handling the budget cuts. “This approach is going to have to be a bit more surgical and a bit more precise.”

Ransdell could not say specifically whether or not layoffs were in the future but speculated that they were a possibility.

Ransdell took time to speak about two legislative initiatives that could impact WKU if they are passed by the state legislature: Gov. Bevin’s proposed shift to 100 percent outcomes-based funding for postsecondary education by fiscal year 2020, and a recent bill introduced by Rep. Dan Seum, R-Louisville, that would freeze tuition at all public universities for eight years.

Ransdell said this proposed tuition freeze isn’t feasible, especially in times when universities are being asked to cut their budgets.

The proposed move to an outcomes-based funding model was a topic of much discussion. Ransdell spoke about the focus on that funding model.

“I don’t want all the attention on the outcomes-based model to overshadow the need for new funding and incremental funding for higher education,” he said.

Ransdell also expressed concerns about what a move to an outcomes-based model might do to higher education in the state.

“I hope it doesn’t come to the point where the only chance to get new money is at the expense of another institution. That would be an unfortunate dynamic,” he said.

Other topics Herald editors discussed with Ransdell include WKU’s ending of its contract with Navitas, the new Black Cultural Center and Ransdell’s thoughts on the current state of WKU athletics. Future Herald stories will touch on all of these, so keep an eye out in the coming issues.