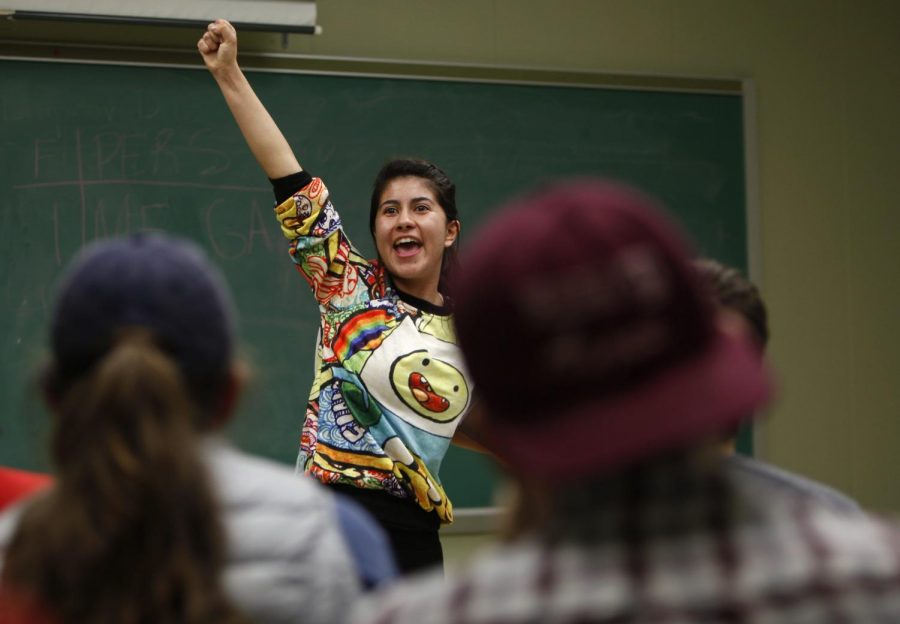 Camille Acosta is a junior from El Paso, Texas on the WKU Forensics Team. She is practicing her speech on "making choices and finding strength within yourself to cope in difficult times", which she will be presenting at Nationals. The speech team does many different things to practice for competitions including full team evaluations in which students present and get feedback on there performance and presentation. Lex Selig/HERALD

WKU’s Forensics team competed in four tournaments this past weekend, Feb. 6-7, when they travelled to Urbana-Champaign, Illinois, and Murray State University for the Illini Stars Swing tournament.

When most people think “forensics,” they usually think about the details in solving crimes. But forensics is also competitive speech and debate, and WKU’s forensics team is the reigning national champion.

The team competes in 11 individual categories, some of which include public speaking, interpretation and limited preparation.

“[Forensics] offers students ranging from junior high to college age the skills necessary to confidently and effectively communicate in any situation,” Ganer Newman, the director of Forensics, stated on the WKU Forensics Web page.

The students on the team spent considerable amounts of time preparing for their events. Most began practicing at the beginning of the semester and spend 13-14 hours per week working with coaches and practicing on their own.

Durwan Green, a sophomore from Lewisville, Texas, placed first in individual sweepstakes in both tournaments. He said he couldn’t completely take the credit for his performance.

“I give all the credit to my coaches and my teammates for pushing me towards my goals,” Green said. “It’s really just a second family.”

“I encourage everyone to come and check out the event and see what forensics is like,” Newman said. “I would also like to invite any faculty to serve as judges.”

WKU’s Forensics team will also be hosting a Black History Month Symposium in the Downing Student Union Auditorium on Wednesday, Feb. 24, at 6:30 p.m. The event will feature students in the forensics program.