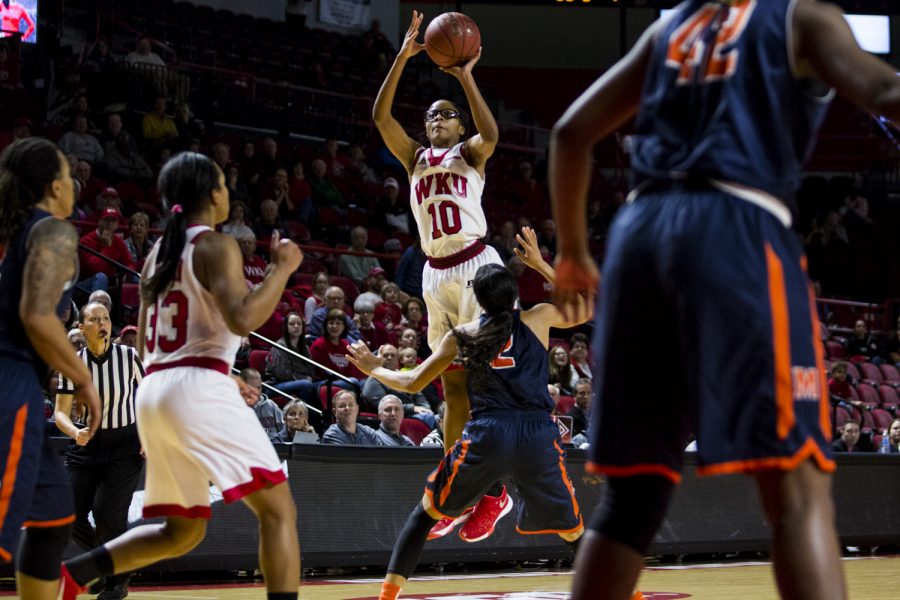 WKU was leading rival Middle Tennessee for the better part of the first half on Jan. 30 in Murfeesboro, Tennessee, but then things went poorly for the Lady Toppers.

MTSU went on multiple runs in the second half and ended WKU’s 14-game winning streak with an 83-75 triumph over the Lady Toppers.

Almost one month to the date, the Lady Toppers will get a chance to avenge the loss and move into a tie for second in the C-USA standings.

“I’m pretty motivated,” sophomore forward Ivy Brown said. “It’s a rivalry game and they beat us, so we’re just ready to come out and show how we’ve improved over the past few weeks, and hopefully we can beat them.”

WKU is just 3-3 in its past six games and is coming off a three-game road trip, including a loss against Charlotte on Saturday. The Lady Toppers are 10-1 at home on the season and will host UAB on Saturday.

“We’re really excited to be back at home in front of our crowd,” sophomore guard Tashia Brown said. “Of course we’d like to [have gone] 3-0, but hopefully we learn from Saturday’s game and are just ready to play Middle [Tennessee].”

With the opportunity to close in on a 2.5-game lead on the standings, Head Coach Michelle Clark-Heard and her team have been focusing on playing smart basketball this week in practice.

“I think the most important thing is getting everybody comfortable in the way we play our defenses,” Clark-Heard said. “I think what’s happened is when you have different people rotating in at different times, you have mix-ups because we change up a lot of our defenses. We made a lot of mental mistakes early in the Middle [Tennessee] game. We want to correct those things and take care of the things that we need to.”

Clark-Heard preached the idea of taking the season one game at a time so that her team doesn’t get ahead of itself, but there’s an obvious sentiment that the loss to MTSU in late January has been in the back of this team’s mind.

“After that loss, we’re just all excited to get back out there and show that we can beat them and that we should’ve beat them the last time,” Ivy Brown said. “Defensively, we had them in the third quarter, and we just quit playing the defense that we were playing the entire game in the fourth quarter and let them get easy buckets and offensive rebound after offensive rebound.”

Defensive breakdowns and a lack of rebounding late in the game were big reasons why the Lady Toppers couldn’t finish strong in the first contest. MTSU outscored WKU 28-16 in the fourth quarter and grabbed 8 boards on the defensive end, limiting second shot opportunities for the Lady Toppers when they needed them most.

“We were in the ballgame the whole way, and toward the end I think what hurt us is they got some offensive rebounds and they made some shots that weren’t contested,” Clark-Heard said.

The Lady Toppers will have to take on MTSU and the rest of the season without freshman forward Simone Goods, who left the program on Monday. Goods had a career-high 10 points against MTSU in the first meeting.

Goods was starting to see more playing time before the announcement, but Ivy Brown applauded another freshman forward’s play recently when asked about the loss of Goods in the post.

“Taylor [Brown] has been playing really well the past few games,” Ivy Brown said. “Her confidence level has gone up, and I think that’s really important for her to step up the way she has offensively and defensively.”

One player down or not, Clark-Heard will have her team ready to go on Thursday night when the lights come on in Diddle Arena. It’s hard to beat WKU in any aspect of the game on its home floor, and the record backs up this trend.

“I’m just really proud of this group and how we continue to keep fighting,” Clark-Heard said. “If you look at the games we’ve played, we’ve been in every game, and if there’s anything [you want] as a coach, that’s what you want. Any time you have a chance to play against a great team, you want to have the opportunity to do the things you can and bring a great game plan.”