Lady Tops hold on in bounce-back effort against UTSA 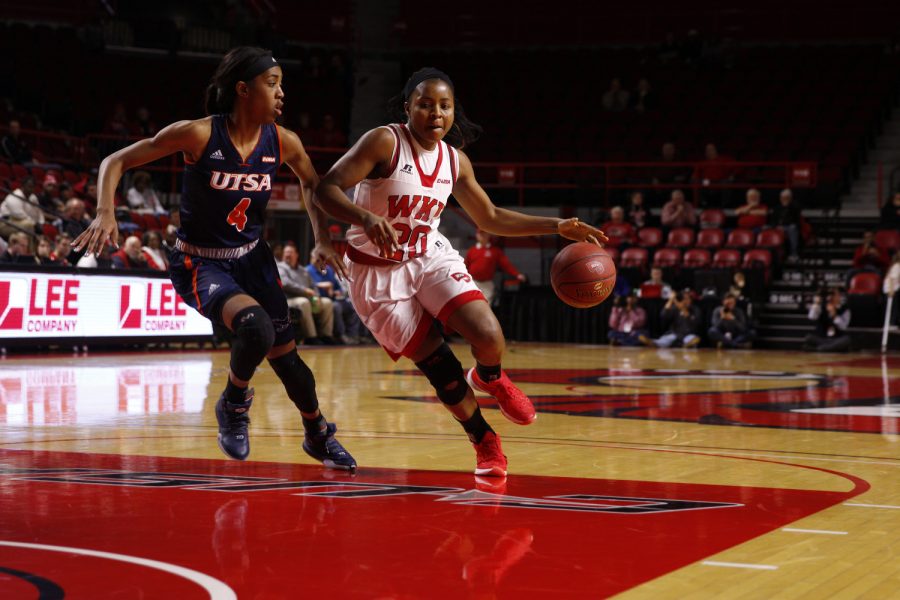 The Lady Tops (18-3) kept up their home winning streak on Thursday. Behind 17 points from sophomore forward Tashia Brown, WKU held on to beat a hot-shooting University of Texas, San Antonio team by a final score of 72-65.

“We figured out what we needed to get the win and that’s the most important thing,” Head Coach Michelle Clark-Heard said.

After the Lady Tops led by 15 at one point, UTSA got to within three of the WKU lead with under a minute to go.

The WKU defense struggled to guard the perimeter on the night as the Roadrunners shot 53 percent (10-19) from beyond the arc. UTSA guard Kasia Kiejdrowska was difficult to guard as she poured in 23 points while adding four three pointers.

“We knew they were drivers so we were trying to clog up the paint and we were just getting out late,” senior forward Jalyyn McClain said.

Freshman guard Kayla Smith and McClain joined Brown in double figures with 11 and 10 points, respectively. There was also one more player who joined the trio in double digits.

With 18 seconds remaining and one second on the shot clock, junior guard Kendall Noble banged home a three-pointer to seal the victory for WKU. She came just four assists shy of a second-career triple-double, registering 14 points, 11 rebounds and 6 assists on the night.

“The first thing I thought was a big-time player makes big-time plays and that’s what I think Kendall is,” Clark-Heard said.

The Lady Tops also got a boost from freshman forward Simone Goods in the victory.

Goods had 7 points and 3 rebounds in 21 minutes of action. Averaging only 9.7 minutes on the season, Goods has seen an increase in playing time lately after recovering from an injury.

“She’s a very big inside presence for us, and it really helps because it helps our post rotations,” Clark-Heard said. “She’s really embraced it and she’s working to continue to keep getting better.”

The win moved the Lady Tops into a two-way tie with UTEP for first in Conference USA play. The Miners of UTEP suffered their first conference loss on Thursday night, falling 79-64 at Marshall.

“Every game’s a big game anyway,” Clark-Heard said. “It’s going to be a big game because it’s our next game and I think that’s the most important thing: that we get better so we can continue to move forward because we have a lot of basketball left.”

WKU will be back in action Saturday at 2 p.m. as they will take on UTEP at Diddle Arena.