Breaking Through: Star forward has breakout season for Lady Tops 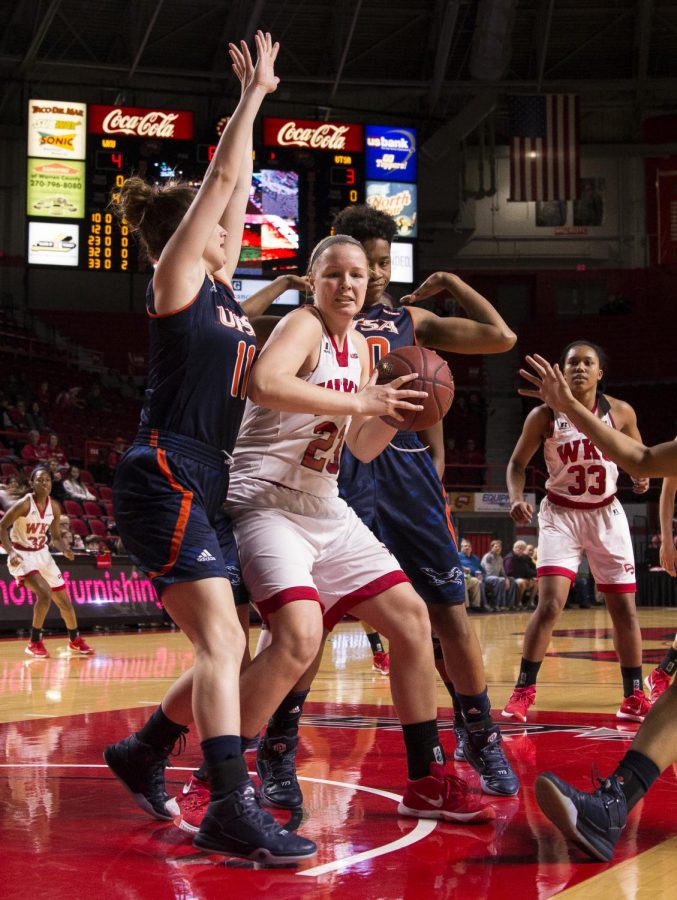 WKU's forward Ivy Brown (23) goes up for a shot during a WKU-University of Texas at San Antonio basketball game on Thursday Feb. 4 at E.A. Diddle Arena in Bowling Green, Ky. Kathryn Ziesig/HERALD

However, Brown focuses on exhausting every bit of her capability to help her own team in whatever role that may be.

“She’s the epitome of a team player,” Associate Head Coach Greg Collins said. “She wants to be on the floor and do whatever it takes to win.”

The 6-foot 1-inch Hodgenville native was recruited heavily out of high school and chose WKU over nationally ranked program University of Kentucky.

“It was interesting,” Brown said. “Besides the smaller Division-1 schools, Western was really the only one that showed me a lot of interest from the beginning. Kentucky came in late, but just knowing that [WKU] was there from the start is pretty much what sold me.”

Ranked as the 73rd overall player in the nation in 2014 by espn.com, Brown was a huge gain for Head Coach Michelle-Clark Heard.

As a freshman at WKU, Brown played in all 35 games and started once, averaging 3.3 points and 2.7 rebounds per game. A former McDonald’s All-American nominee and 2,900-point scorer in high school, Brown had to assume a role-player status as a freshman as she had to play behind one of the best players to program history: Chastity Gooch.

“It’s funny because in high school I felt like I had to score 25 points to win and it was different just to come in and score a few buckets and get a few rebounds,” Brown said. “My role kind of changed nightly; you never really knew.”

Now in her second season on the Hill, Brown is a staple in the starting lineup. She currently averages close to a double-double with 11.3 points and a team-leading nine rebounds per game.

“I’ve worked pretty hard at it,” Brown said. “I talked to coach Collins and coach Heard at the end of last year, and I told them I’d do whatever it takes to be able to play. I just wanted to do whatever it took to help this team.”

Brown has seven double-doubles already on the season, and usually she’s not even the second highest scorer on her own team even in those games. Brown doesn’t care one bit. Instead, she deflects the attention to her teammates.

“It doesn’t bother me,” Brown said. “It’s a team sport; the win is the most important thing. Just knowing that I have Tashia [Brown] and Kendall [Noble] on my team makes it a lot easier.

It’s hard to get to Ivy Brown. She’s more than calm, cool and collected; she’s extremely poised and intensely competitive at the same time. Nothing seems to bother her on the big stage.

Last season in the NCAA Tournament against Texas, Brown gave the Lady Toppers a final beacon of hope by nailing a 3-pointer to get WKU within one point of the lead with under a minute to go. In the biggest game of the 2015-2016 season, Brown had 12 points and led the team in rebounding with nine against UTEP.

“I’d much rather play in front of 5,000 people than 500. Just the atmosphere and the energy, you can build off that and play harder,” Brown said.

After Brown’s freshman season, she was somewhat disappointed with her statistics.

However, the coaching staff was able to compare her numbers with that of Gooch’s in her first year.

“I sat her down with Gooch’s numbers and her [Brown’s] numbers and I tried to explain to her that she didn’t have an awful freshman year,” Collins said. “[Her] numbers are almost identical to Chastity Gooch’s. Everything was almost a carbon copy; the only difference was that Chastity played 22 minutes and Ivy played 11.”

Drawing comparisons to the fourth all-time leading scorer in a storied program like WKU women’s basketball is high praise. Yes, Ivy Brown has a similar skill set as Gooch, but her work ethic and attitude are what will allow her individual career to be compared with the all-time great Lady Toppers.