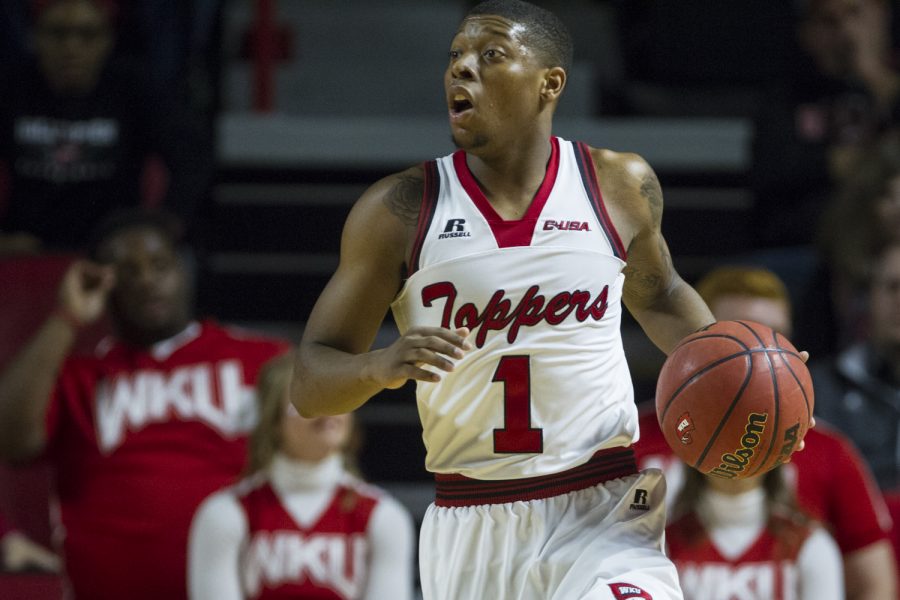 WKU guard McNeal, Chris (1) drive the ball down the court during a WKU-University of Alabama at Birmingham basketball game on Thursday Jan. 28 at E.A. Diddle Arena in Bowling Green, Ky. Shaban Athuman/HERALD

The WKU men’s basketball team (12-11) flew past the Roadrunners of the University of Texas at El Paso (4-19) in an 83-71 victory Thursday night in San Antonio, Texas as the Hilltoppers earned their fourth conference victory.

The Hilltoppers came out of the gates red-hot as they shot 60 percent from the field in the first 20 minutes and led by as many as 25 points in the first half.

Senior guard Aaron Cosby scored 12 points in the first half while sinking two three pointers. Junior guard Fredrick Edmond played all 20 minutes in the first half and filled up the stat sheet. In the first period Edmond shot five of six from the floor and notched 11 points, three rebounds and four assists.

The Hilltoppers made sure that they would finish what they started in the first half as they would earn a much needed conference victory.

However, UTSA knocked on WKU’s door in the second half. Even with a valiant run which got them as close as 10 points, the Roadrunners could not get enough going on offense against the much improved Hilltopper defense.

Cosby led the way for WKU with 21 points as he went 11-12 from the charity stripe on the evening.

The Hilltoppers will look to win two back-to-back games for the first time since wins over Detroit University and Brescia University on Dec. 22 and 28.

WKU will travel to El Paso, Texas to take on the Miners of the University of Texas at El Paso this Saturday at 4 p.m. The team will be wearing throwback jerseys that display “Western Kentucky” on the front as they will honor the 1966 NCAA National Champions Texas Western.