Challenging Texas homestand up next for Lady Tops 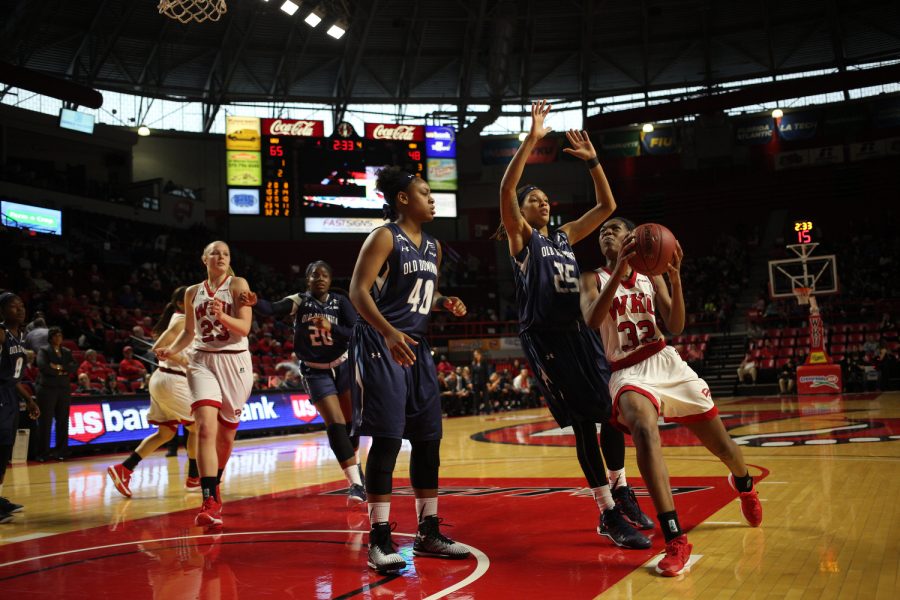 After falling on the road to Middle Tennessee on Saturday, Head Coach Michelle Clark-Heard made sure her team was ready to refocus for a crucial week in conference play.

On Thursday, WKU will welcome the Roadrunners of the University of Texas,  San Antonio (7-12) to Diddle Arena.

But before Clark-Heard and her team began preparation for UTSA, they revisited Saturday’s game and tried to learn something about themselves.

“I think it went well,” Clark-Heard said. “We went back and evaluated the game and looked at what we needed to, and a lot of the mistakes we made were mental mistakes on our part, and credit to [MTSU] again.”

A 14-game winning streak is something any team will enjoy, but Clark-Heard also believes a loss can be beneficial in the middle of a season.

“I think it helps everybody,” Clark-Heard said. “I think it makes you go back and kind of put a magnifying glass on the things that might have been happening, but you might just not have seen them the way you saw them in the game with us losing.”

Defense was the lynchpin of the winning streak for the Lady Tops. No team broke 70 points against WKU during the streak, and only twice did a team reach the 69-point mark at home, which was against Austin Peay and at Florida International.

Saturday, however, was a different story.

“We gave up 58 points in two quarters,” Clark-Heard said. “We gave up 49 against UAB for the whole game. We gotta make sure we get the stops and do the things that we need to do. Those are correctable things, and I think that’s what we really want to focus on and move on to get better so we can prepare for UTSA.”

Although the team’s record might not show it, UTSA has a lot of experience. The Roadrunners return 12 of their 13 players from a season ago.

Clark-Heard said this year’s UTSA team is similar to last year’s. “They have a lot of players back,” she said.

“They run dribble-weave motion, they get up and down the floor [and] they press some. Every team in this conference is capable of winning day in and day out.”

With UTSA, a team laden with juniors and seniors, coming in before a battle with conference leader University of Texas, El Paso on Saturday, the Lady Tops cannot lose focus.

“We just lost, so there’s no way we’re going to look past any game. We’ve never been that type of team,” Clark-Heard said.

WKU led by double digits in the second half and allowed UTSA to come back and steal a 64-63 victory over the Lady Tops.

“I think last year’s game was not fun at all; we definitely should’ve won that game,” redshirt junior guard Kendall Noble said. “All the returners remember that game very clearly, and we want to really hand it back to them.”

While Thursday’s game is the first order of business, there is no doubt in this WKU squad that Saturday’s game has big implications within the conference as well.

UTEP comes in as the winner of its last 10 games and has collected a 9-0 start to conference play during that stretch.

“It’s really important that we take care of business on Thursday to get prepared even more for Saturday,” freshman guard Kayla Smith said.

After losing to the best conference opponent to date — MTSU — Smith and company know the opportunity on Saturday is one they really need to capitalize on.

“Any game really refocuses you because you work on the little things that happened before to improve,” Smith said. “It’s going to be a really big game. We just got to focus and do what we have to do, and we’ll be ready.”

Ed. note: A previous version of this article’s headline stated that the Lady Tops had two road games this week. Both games are actually at home. This error has been corrected. The Herald regrets the error.