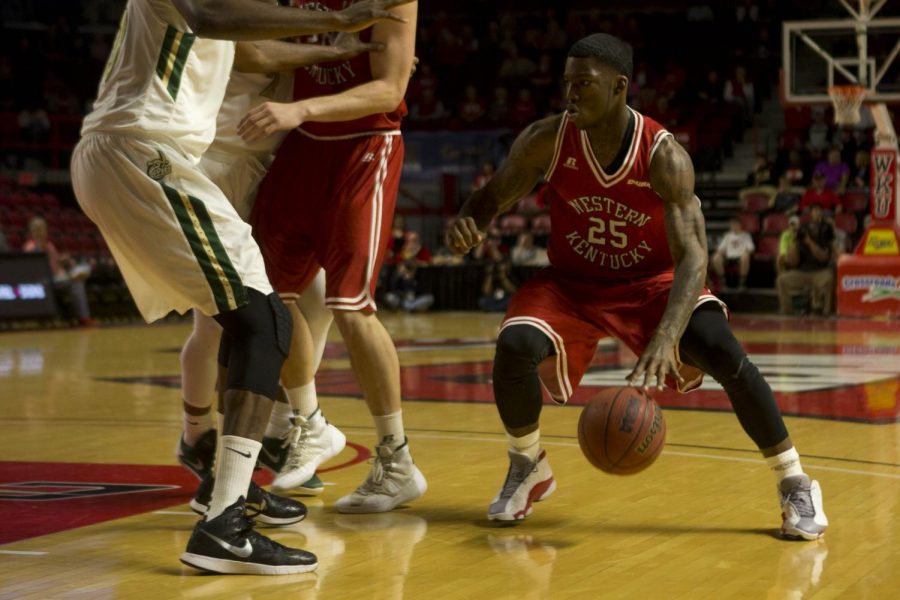 WKU junior guard Fredrick Edmond (25) slips around a screen on his way to the hoop. Edmond had nine points, four rebounds, and two steals during the game against Charlotte. WKU defeated Charlotte, 59 - 54. Western Kentucky University Men's Basketball team takes on the University of Charlotte 49ers at Diddle Arena on Feb. 20, 2016, in Bowling Green, Ky. Matt Lunsford/HERALD

WKU (13-14) earned a 59-54 victory over the University of North Carolina at Charlotte (10-17) in front of a home crowd after trailing by as many as 18 points Saturday afternoon.

The contest featured sloppy play from both teams as they combined to commit 38 turnovers while only making 37 shots. The Tops also only shot 30 percent from the field in the matchup. Charlotte shot 51 percent.

For the Hilltoppers, the victory was very welcomed as they had previously lost three straight home matchups in very close fashion.

“It felt good to finally finish one,” senior guard Aaron Cosby said. “We have showed we can play with just about anybody, but we have had trouble closing out, so this was a good win.”

Cosby managed to score seven of the Hilltoppers’ last nine points, including a critical three-point shot with 39 seconds left that gave WKU a four-point lead.

“That’s what fifth-year seniors are supposed to do,” Head Coach Ray Harper said. “Guys like Chris McNeal and Marlon (Hunter) who are freshmen shouldn’t have to make plays like that down the stretch. It should be your older, veteran guys.”

Overall, the game was a tale of two halves. The 49ers led the Tops in the first half by 13 points. However, Charlotte would only score 20 points in the second half as WKU won that period by 18 points.

One big reason why the Hilltoppers won despite shooting only 30 percent is that the 49ers turned the ball over a total of 24 times in the game, most of which came in that second period.

The Tops also gained an advantage from the free-throw line. WKU went 21-26 from the line while Charlotte only made six free-throws on 12 attempts.

“Now, we are starting to be a team that can get stops on the defensive end,” Harper said. “Now we go on the road and get the two top dogs (teams) in the league. We are going to see where we are at heading into the tournament.”