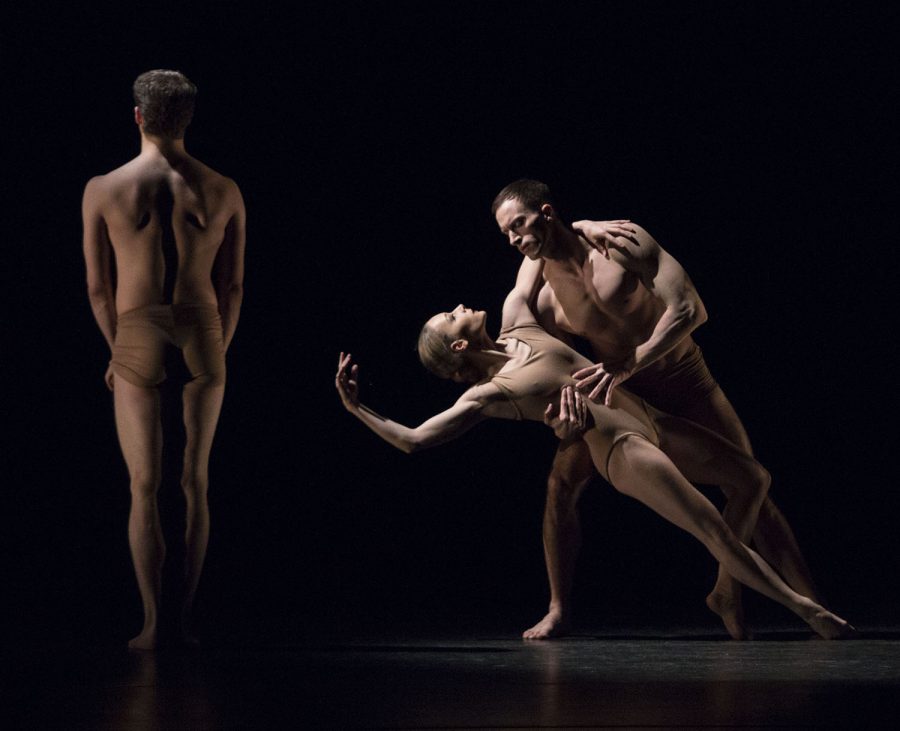 Charlotte Landreau is suspended in air (center right) during the performance "Lamentation Variations" produced to commemorate 9/11. This piece portrays a variation of Martha Graham's most famous piece, Lamentation. Mhari Shaw/HERALD

As the audience filed into the auditorium, a screen silently played a film that showed dancers dressed in oriental clothing, who told an unheard story as they moved together across the screen.

When the display faded to black and the lights of the hall dimmed, Larry Snyder, interim dean of Potter College of Arts and Letters, walked on stage to welcome the audience to the show. He introduced the Dance Company as the oldest and most celebrated dance group in the country and discussed its “profound effect on contemporary culture.”

The group performed several dances throughout the night. Some were choreographed by Martha Graham herself, while others were results of inspiration from her influential style.

Between performances throughout the evening, Artistic Director of the company Janet Eilber took the audience through Graham’s life in a series of photos and video clips, each of which included its own unique story.

Graham’s distinctive contemporary style of dance was characterized by her fluid movements of contraction and release. The performers moved together expertly in these sharp yet graceful motions, dancing across the stage as if they were one breathing body.

The show concluded with a piece called “Echo” that Eilber said was inspired by the Greek mythical character Narcissus, to which the audience responded in awed cheers and a standing ovation.

Amanda Atkinson of Bowling Green said she came to enjoy the show with her daughter, Rachel Atkinson, who takes musical theater and dance lessons at Xclaim, a nonprofit organization in the Southern Kentucky region.

Both mother and daughter said they couldn’t help but be drawn in by the emotion projected by the dancers on stage.

“Modern dance is different from anything I’ve ever seen before,” Amanda Atkinson said. She added that she was most impressed by the muscle control the performers displayed, an ability that was noticeable in every dramatically controlled movement of Graham’s dancers.

Hilarie Spangler, Middlesboro freshman, also said she was amazed at the dancers’ skills.

“The technique alone is amazing, but the pure passion is what really resonates,” Spangler said.

A musical theater student, Spangler said she thought this portion of the Cultural Enhancement Series would help support art exposure on campus. Although Spangler said she isn’t an experienced dancer, she was inspired by the Dance Company’s performance.