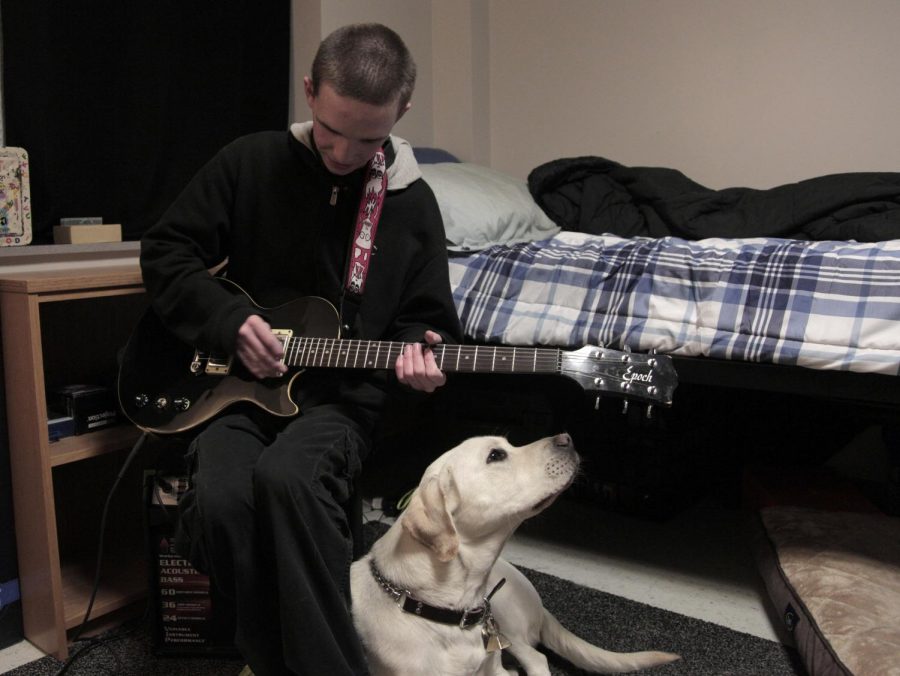 Chuck Winstead, a freshman from Owensboro, is studying mechanical engineering. He and his dog Puck can be regularly spotted around campus or found relaxing in his dorm room playing guitar. Winstead has had two leader dogs since he has been on campus, a black lab named Topper and a yellow lab named Puck, which make his travels around campus much easier. Lex Selig/HERALD

For many, leaving home and coming to college can be a new experience and a huge adjustment. For some, the experience is better handled with animals; from service animals to emotional support animals, WKU offers options to students allowing them to bring the comfort of animals to school.

For Owensboro freshman Chuck Winstead, a  mechanical engineering major, his service dog Puck is more than just an animal; he’s a lifeline. Puck helps Winstead get around and navigate the campus.

“Think if I was to grab a person’s arm and follow them around He guides me around like bumps and stairs,” Winstead said. “Essentially, Puck is my eyes when I’m walking around.”

When Winstead made the decision to be a Topper, one of his biggest concerns was making sure his dog had the space and accommodations he needs.

“All I was concerned about was getting a private room, It was necessary if I was going to be having a service dog,” Winstead said. “When I got my room I had a two-person room with an extra bed and extra furniture in here. We had to get something out to give the dog room. It took a lot of pulling teeth, but we finally managed to get the bed out of the way.”

Lexington junior Hannah Jenkins, an elementary education major, also went through the process of getting an animal approved to live in the dorm. Unlike Winstead and Puck, Jenkins and her animal, Dean Martin, or “Dino,” is an emotional support animal.

Jenkins said one of the biggest differences is Dino is only allowed in her dorm and outside areas, and stays with her and her roommate in a dorm. According to Jenkins, Dino functions in helping to calm her and be able to continue with her day.

“He helps me get up. I have to take care of him in the morning so I have to get up and get my day started because I have him to take care of. He lowers everyone’s stress level, not only mine,” Jenkins said.

Jenkins went through the Student Accessibility Resource Center, or SARC, and Housing and Residence Life in order to get her dog approved.

Jenkins said there’s more than one way to go through and receive approval. Jenkins navigated SARC’s website and filled out an online form to get into their system. The form was to let SARC know who she was and what she was looking to get approved.

From there, Jenkins went to her psychiatrists to get a note which stated she would benefit from an emotional support animal.

Winstead said the biggest issue was making sure that he got the private room and space he needed, and the process proved to be tougher than expected.

“[One of the improvements would be to] Give them a private room, but don’t make it where you have to pull teeth to get one,” Winstead said.

Jenkins believes they could improve the process by speeding it up. The process took a semester of her being at WKU until it was approved.

“One thing they could do is make the process faster,” Jenkins said. “It took an entire semester to get it approved. It just took a long time.”

One of WKU’s biggest accommodations was just letting him come here, according to Jenkins.

“They let him here,” Jenkins said. “That’s a huge deal. The staff all is really supportive. They don’t really do anything because he is my responsibility, but they let him here and I am super thankful for it.”