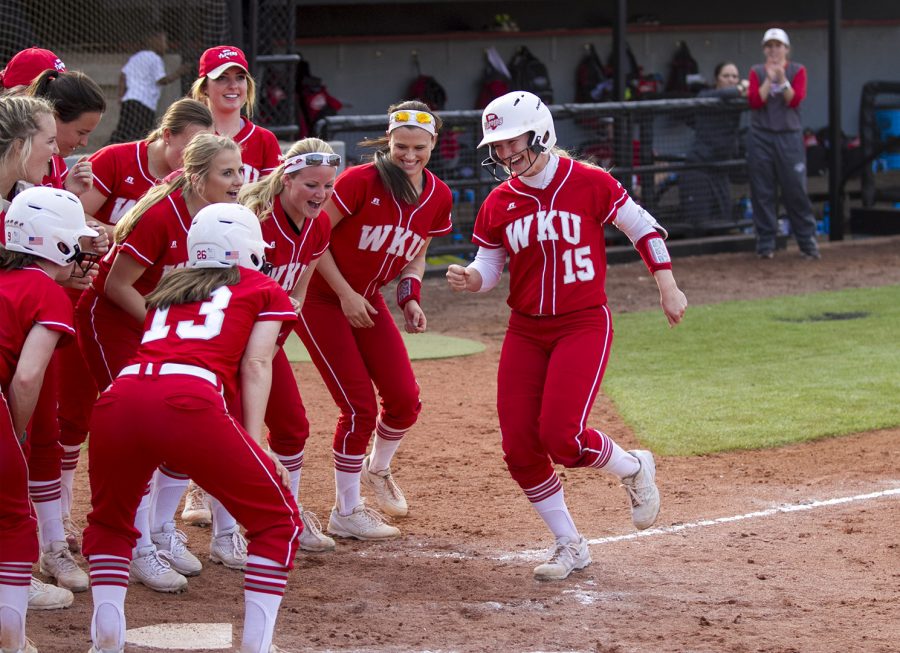 The Lady Toppers cheer as outfielder Kelsey McGuffin (15) reaches home plate after hitting a two-run homer during the Lady Topper's 5-0 win over Austin Peay in the Holiday Inn Hilltopper Classic on Saturday, Feb. 20, 2016 at the WKU softball field. Mike Clark/HERALD

WKU softball went against Missouri State and Austin Peay University this past weekend in four total matches, finishing with two losses on Friday and two victories on Saturday.

However, the team seemed determined to turn around the outcome of the weekend when on Saturday they won both games.

The first game against Missouri State ended with a score of 4-3 after seven innings. The contest against Austin Peay ended in a shutout after WKU scored five runs and held the opponent to zero runs.

“I feel like it was a whole different team,” Head Coach Amy Tudor said. “Our inconsistencies can be frustrating, but our fight came out [Saturday], and I was really proud of all the grit and all the hard work that we put in from the circle all the way from our hitting to our defense.”

The second game against Missouri State was a fight for the Lady Toppers when they fell behind 2-0 to the Lady Bears after a half inning. Senior infielder Brooke Holloway brought the fight back after a home run in the first inning.

Freshman outfielder Kelsey McGuffin’s RBI groundout then brought the score to a tie at 3-3 before junior catcher Taylor Proctor provided the winning hit that notched the 4-3 final score.

Holloway and McGuffin also had a hand in the win against Austin Peay in the game that followed. Holloway started off with a triple then was driven home for the first run of the game in the first inning.

In the third inning, McGuffin hit the ball just out of reach from the Lady Governors’ center fielder. The result was a home run for the freshman that brought in Proctor and made the score 3-0.

Holloway made another prominent appearance in the sixth inning that brought her and senior walk-on utility player Jatavia Wright home for the winning score of 5-0.

Tudor said she was proud of Holloway, McGuffin, Proctor, Wright and the rest of the team. “I was really proud of their effort and their cohesiveness,” Tudor said.

Sophomore pitcher Hannah Parker pitched all seven innings of each game on Saturday. Tudor said she was proud of Parker’s pitching throughout the 13 or 14 innings she was in the circle this weekend.

“I thought that Parker did a great job in the circle, and that sets the tone for the whole entire game,” Tudor said.

The team was scheduled to play a fifth game against Murray State on Sunday for the Holiday Inn Hilltopper Classic, but the game was cancelled due to the rain. The weather on Saturday was a stark comparison with clear, sunny skies.

“We had a great fan turnout,” said Tudor. “That’s always fun to play in front of. Great weather, and just proud of our fight after playing not like us [on Friday]. Definitely still things to work on.”

The Lady Toppers are set to play at home next weekend against four different teams in five matches in the Holiday Inn Spring Fling.

On Friday they will face Valparaiso, and then on Saturday, the team will compete against Ball State University and Western Carolina. On Sunday two more games will ensue: the first against SEMO and the second against Western Carolina.