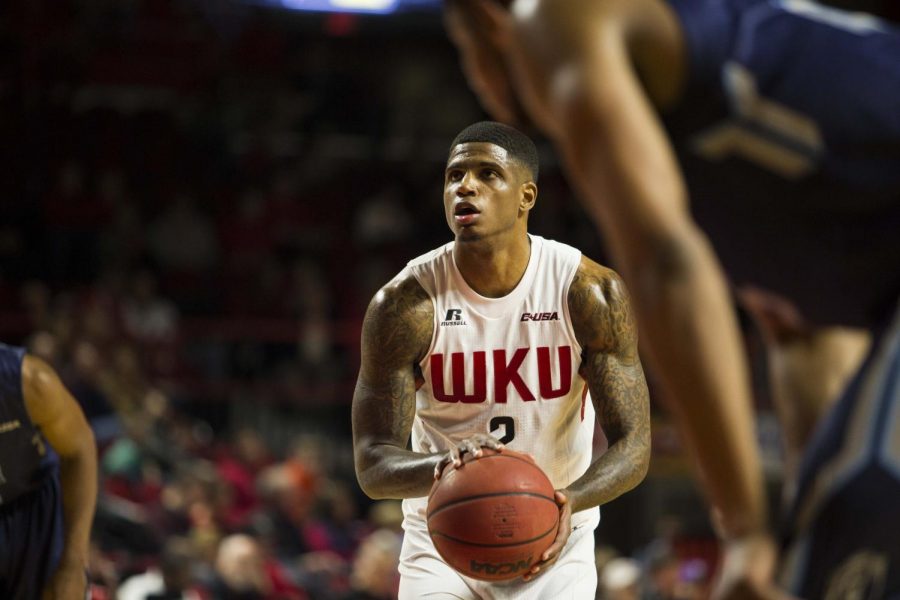 Senior guard Aaron Crosby takes a free throw shot against Old Dominion University during the Hilltoppers' game against the Monarchs on Feb. 18. Cosby went 6-8 from the line in the 59-56 loss.  Jacob Hurdt/HERALD

Old Dominion came in to Diddle Arena on Thursday night looking to take down the Toppers for the second time this season, and they succeeded with a 59-56 victory.

The game remained a tight one for most of the night. WKU managed to go up 56-52 with 2:11 remaining, but ODU put together a run and went up by one point. WKU had a chance to take the lead with 26.1 seconds remaining.

Senior guard Aaron Cosby took the ball to the rim and was met by two ODU defenders and could not convert. WKU fouled Monarch senior guard Trey Freeman with 9.2 seconds left in regulation.

Freeman would go on to make both free throws to put the Monarchs up by a score of 59-56.

Head Coach Ray Harper called a timeout and designed a play for Cosby to get an open look to tie the game. Cosby got a clean look from deep, but the shot did not fall.

“We got too many possessions without buckets. You’ve got to have someone that really wants the ball and can go score it in those situations,” Harper said. “When it gets winning time, you have to execute and you have to do certain things.”

Freeman was a focus of Hilltopper practices throughout the week. The leading scorer in Conference USA started out slow in the first half but came to life in the second.

“He’s gonna make some tough shots,” Harper said. “He does such a good job of cutting, he’s gonna get some separation from time to time, but for the most part, I think we did a pretty good job (on Freeman).”

Freeman finished with 26 points on 11-27 shooting to go along with two game-clinching free throws. Sophomore forward Brandan Stith was the only other Monarch in double figures with 16 points. He also added 13 rebounds.

WKU had three players in double figures on the night. Cosby finished with 15 points, going 3-13 from the field and 6-8 from the free-throw line. Senior forward Aleksej Rostov ended with 10 points and six rebounds while junior guard Fredrick Edmond put up 10 points and grabbed five boards.

The Tops will be back in action this Saturday at 2 p.m. against Charlotte. WKU will be sporting their throwback uniforms to honor the WKU team that won back-to-back Ohio Valley Conference championships in the 1960s.