Life in the Red: One draft analyst’s thoughts (and mock draft landing spot) on Brenden Jaimes 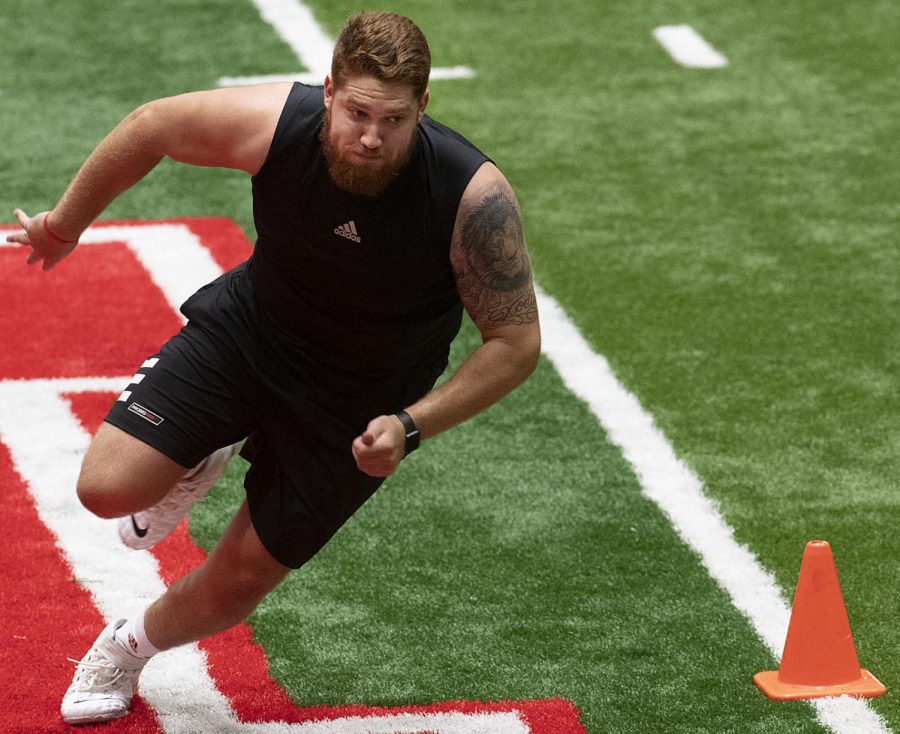 Brenden Jaimes makes a turn in a shuttle run during Pro Day at Nebraska football's pro day on March 23 at Hawks Championship Center.

The NFL Draft starts in two weeks, and there is no shortage of mock drafts, prospect rankings and all the rest out there on the internet for perusing.

Each year, The Athletic’s Dane Brugler puts together a massive draft guide and then a follow-up seven-round mock draft.

‘We’re about where we should be’: At spring’s midpoints, Husker coordinators see progress

Jaimes earns a third/fourth-round grade and checks in as the No. 15 offensive tackle in the class, while the other four Husker draft entrants — offensive lineman Matt Farniok, tight end Jack Stoll, defensive back Dicaprio Bootle and running back Dedrick Mills — are listed as likely undrafted free agents.

Of Jaimes, Brugler writes in part, “Overall, Jaimes doesn’t have much of a wow factor, but he doesn’t have a fatal flaw either and produced quality tape at left tackle. He will provide immediate tackle/guard depth for an NFL team and might not give the job back if given the opportunity to start.”

In a mock draft released Thursday, Brugler has Jaimes landing with the Philadelphia Eagles in the fourth round with the No. 123 overall selection.

Nebraska hasn’t had a player selected higher than the sixth round since the Eagles took Nate Gerry in the fifth round (No. 184 overall). The last player to get picked higher than No. 123 overall was defensive tackle Maliek Collins (third round, No. 67 overall) in 2016.