Local teacher to be inducted into hall of fame 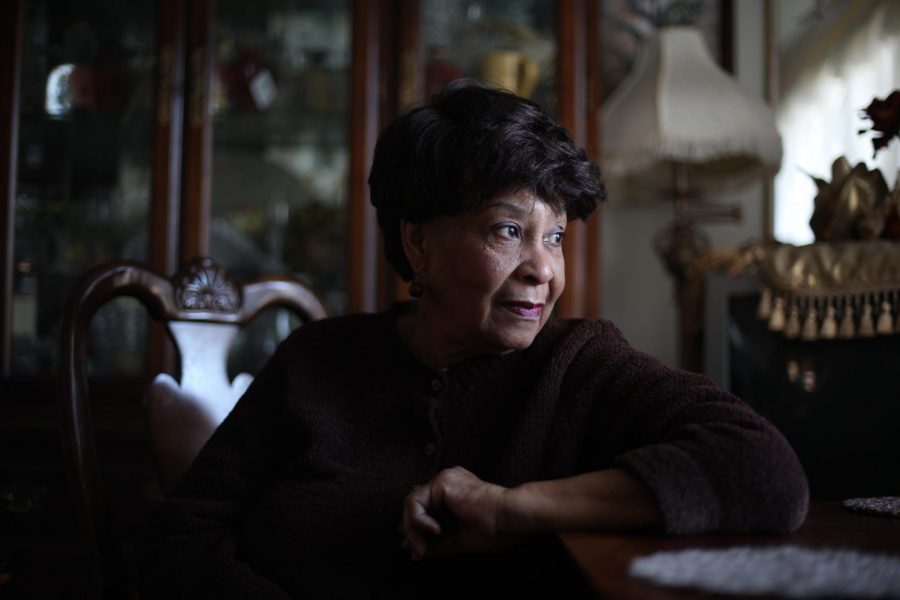 Angela Townsend sit at a table in her home in Bowling Green, Kentucky on Tuesday, Feb.2. Townsend has been recently nominated to be inducted in the Kentucky Teacher Hall of Fame after retiring seven years ago from a 38 year long career as a teacher. Jacob Hurdt/HERALD

Townsend will be among the three inductees celebrated at a ceremony March 15 for their commitment to teaching. Kentucky’s Teacher Hall of Fame is located at WKU, the university where Townsend received her Rank I certificate in teaching.

A native of Bowling Green, Townsend taught for more than 38 years after she began her career teaching senior English at Bowling Green High School in 1966. She later taught at schools such as Lincoln Elementary School in Louisville and Princeton Junior High School in Cincinnati.

She later moved back to her hometown and taught at Bowling Green Junior High, Bowling Green Senior High and Warren Central High School.  In 2009, she retired from Greenwood High School to care for her sick mother, who died later that year.

Townsend studied Montessori at Xavier University in Cincinnati and received a bachelor’s degree in English and psychology from the University of Kentucky. Townsend went on to receive a masters Rank I certification and a reading endorsement from WKU.

“It makes me feel great to be nominated. I can’t say that I deserve all the credit,” Townsend said. “My students were respective to all that I was doing. The Kentucky education reform changed my way of teaching — changed marvelous things and the way students learn; they should get credit too.”

Townsend said her nomination for the hall of fame from Judy Johnson and Elizabeth Shepard, a former student-teacher, surprised her. She said she was having a normal, peaceful day at her house when she received a call from one of her nominators, who was informed by Sam Evans.

“I was told that I went straight through and that the deans, former inductees and college professors basically involved in the election process all agreed about me being nominated,” Townsend said.

Townsend said she had received many heartwarming congratulations on her induction from former students.

“This reminds me of George Strickler, my student back in 1968, who is now doing really well,” Townsend said. “When he heard about my nomination, he wrote me a very beautiful letter talking about what I mean to him and how happy he is that I was nominated.”

She speaks of Strickler as a great student whom she was fond of and who, almost 48 years later, still checks in on his former high school English teacher.

Strickler, a senior partner at the Bell, Orr, Ayres and Moore law firm in Bowling Green, recalls Townsend as being an inspirational teacher.

“She was an energetic young teacher who cared about her students, and you knew she was going to affect lots of lives even back then,” Strickler said. “Over the course of her career, she was a positive influence. In my observation, that’s always been the case, so the recognition that she receives is well deserved.”

When Townsend recalls more painful moments from her teaching experience, her voice loses the excited tone she adopts when talking about successful students.

“I remember the kids I’ve lost,” Townsend said. “One summer a child died, and that was a very bad time for me. When kids had bad times at home and would tell me, I had the skills but not the authority to do anything about it. Those were very dark moments for me.”

Townsend is known for being a poet as well as a hardworking teacher. She has written several poems about the Jonesville community and the time period during the Civil Rights Movement.

“My favorite poems are ‘Wilma Blackburn, the Wax Sculptress,’ ‘The Reverend Jessie Howard Taylor’ and ‘The Musician,’” Townsend said.

The poem about Wilma Blackburn tells the tale of a woman who lived next door to Townsend’s mother and made beautiful flower arrangements.

“She put these beautiful, big flowers out on the dining table at my aunt’s beauty shop and my grandmother’s dining room table,” Townsend said.

She explained that Reverend Jessie Taylor was a man whom she wrote many poems about; he was a character on Sundays and really loved kids. She described him as being very memorable.

“I wrote several poems about the Jonesville community using their character to preserve it,” Townsend said. “I hoped other people would get the feeling and the flavor of what it was like.”

Bringing her childhood and life in Jonesville to others became a theme of her poetry. She tried to keep alive the memory of her home and the people she knew.

“I was born in Jonesville. I grew up there, I went to school there, and I enjoyed writing about and describing it,” she said. “I didn’t want to forget those people, and I didn’t want anybody else to forget them.”