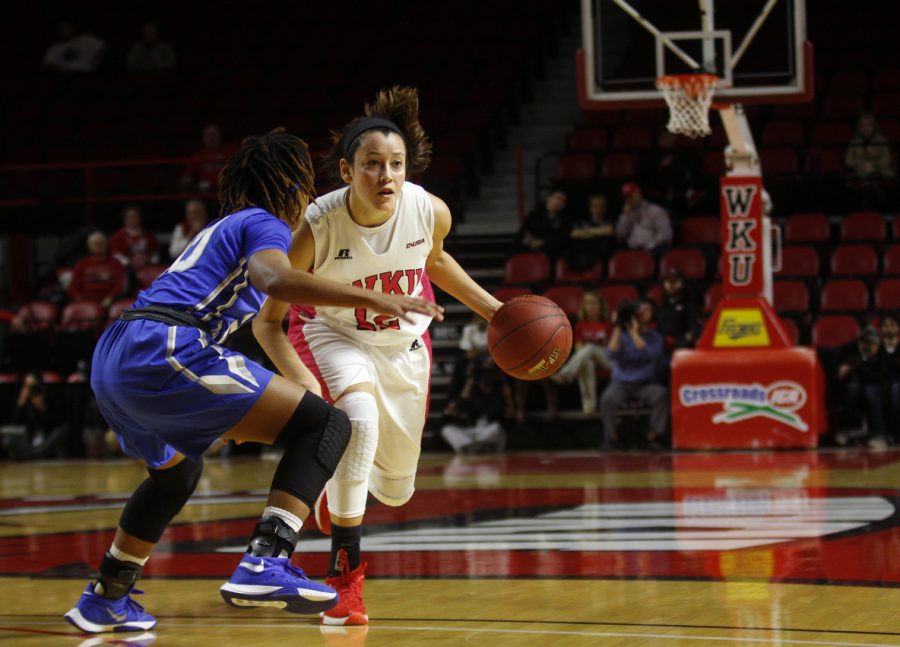 WKU guard Kendall Noble (12) dribbles past the defense during the first half of the lady Toppers 32-30 lead over MTSU at E.A. Diddle Arena. Kathryn Ziesig/HERALD

It wasn’t an easy win, but WKU’s 62-51 victory over rival Middle Tennessee on Thursday was crucial for the Lady Tops as the regular season winds down and the postseason inches closer.

“I’m so proud of our players and our defense,” Head Coach Michelle Clark-Heard said. “To hold that team to five points in the fourth quarter and to turn them over 21 times says a lot about our team.”

Defense was a major theme for both teams on Thursday as both teams shot below 50 percent from the field and combined to make just three shots from beyond the arc.

The Lady Toppers’ defense was just superior enough to secure the victory in the final quarter of play.

“We’ve really been focusing [on] defense, and we changed up a lot of different things during the game, and our players just adjusted,” Clark-Heard said.

Things got off to a difficult start for sophomore guard Tashia Brown in the first half. She picked up her third personal foul late in the second quarter and was held scoreless in the first half. But that didn’t stop her teammates from keeping the Lady Tops in the game.

Junior guard Kendall Noble scored 12 of her 23 points in the first half and helped keep MTSU from growing its lead as WKU headed into halftime down by just two points.

“They went out there and they competed and continued to be aggressive, play hard and they didn’t let [my foul trouble] dictate the game,” Brown said.

Luckily for Clark-Heard and her team, Brown didn’t let her foul trouble dictate her game either. Brown went on a tear in the third quarter, scoring nine quick points and helping WKU take a four-point lead and some momentum into the final ten minutes of play.

“Tashia got in foul trouble, she came back in the second half and kind of did Tashia, let the game come to her,” Clark-Heard said. “And Kendall was Kendall from the moment the ball tipped up.”

Brown finished with 13 points and had seven rebounds to go along with them. No other Lady Topper was in double digits scoring-wise, but several players combined in a collective effort to ensure the victory and move WKU into second place in the Conference USA standings.

“This was a huge team win across the board,” Clark-Heard said. “Jalyyn McClain did a lot of good things for us and got some charges. This was probably the first time that I felt like we followed [the scouting report] throughout the whole game. I believe we changed up more than we had changed up in a lot games. For them to be able to do that in this game, it was really important.”

Clark-Heard said that part of that scouting report was getting stops on the defensive end and turning the Blue Raiders over.

“I thought we did really well tonight,” Noble said. “I think we focused and followed the game plan and didn’t give up open threes like we did last time and we made them make hard shots.”

Any team that plays MTSU prepares for guard Brea Edwards and her ability to shoot the three-ball. Edwards is averaging 18.4 points per game and shoots from behind the arc at a 44 percent clip. On Thursday, she totaled 10 points and was 1-5 from three-point range.

But the biggest problem for the Lady Tops from the MTSU backcourt was point guard Ty Petty. Petty shredded WKU for 18 points through three quarters, and then Sidnee Bopp checked into the game.

Her stat line reads zero points and one rebound. But the stat line to look at when trying to determine Bopp’s impact on the game is the player she guarded.

Bopp logged 11 minutes and was stuck on Petty for the entire fourth quarter. Petty’s fourth quarter stat line included zero points on 0-3 shooting and one turnover.

“Kendall Noble says that [Bopp is the most annoying defender] everyday. She guards Kendall in practice,” Clark-Heard said. “I’m just really proud of her, because she’s really stepped up a lot in these last four games. Sometimes it doesn’t really show in the box score, but what she does is she’s quick, she can guard and the players are really confident with her being on the floor.”

It was efforts like Bopp’s that helped the Lady Tops overcome a ten-rebound deficit and 40 percent shooting percentage to get the win.

“It’s a great feeling, I thought last time [at MTSU] I didn’t play very well at all,” Noble said. “I was trying to be aggressive and get my teammates involved and I think everybody stepped up and played well tonight.”

WKU will have a quick turnaround when UAB comes to Diddle on Saturday at 2 p.m. for the season home finale and Senior Day. Forward Jalyyn McClain is the lone senior on the team.