Lady Tops look to keep up winning streak on the road 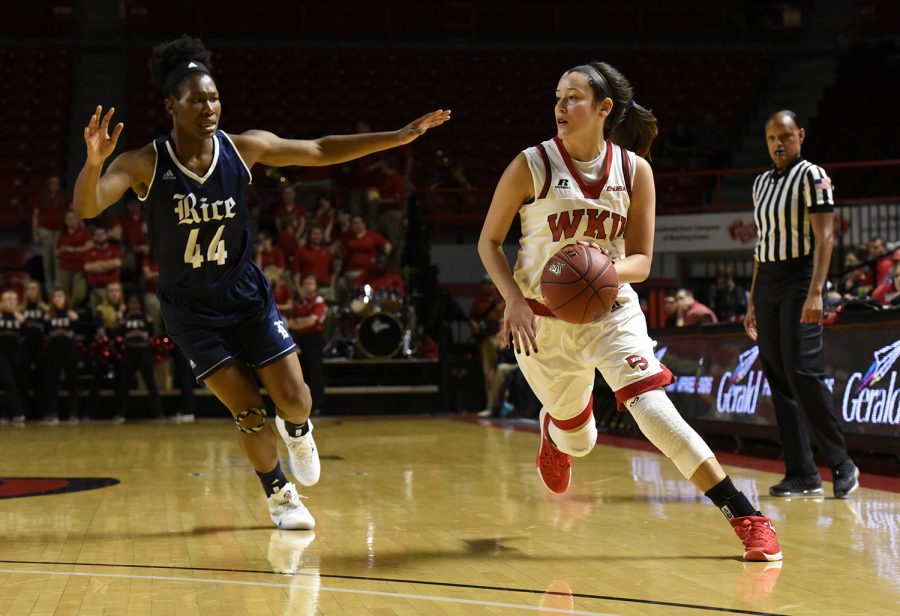 Redshirt junior guard Kendall Noble drives the ball down the court just ahead of Rice player Adaeze Obinnah during WKU's game against the Owls on Jan. 15. Jennifer King/HERALD

One reason WKU sits at 16-2 overall (7-0 in C-USA play) is because of that perfect 9-0 record at home. Now, the Lady Toppers will go on the road to face two tough opponents in the University of Alabama at Birmingham (7-0 at home) and rival Middle Tennessee (5-2 in C-USA play).

After losing two top scorers from last season and welcoming eight new players to this year’s team, Head Coach Michelle Clark-Heard knew winning at home was a must.

“I think to be a successful team and to try and have an ultimate goal of winning a conference championship, you got to take care of your home court,” Clark-Heard said. “You get comfortable at home as players get a chance to sleep in their own beds. At the end of the day, they know what our goals are, and that’s to go on these trips — or ‘business trips’ as we like to call them — and take care of business.”

The first “business trip” of this two-game road swing will be on Thursday night in Birmingham against a UAB team that hasn’t lost inside its building since last January.

“They have guards that can get down the floor and shoot it, and they have a post kid that is really dominant on the inside that can rebound and score,” Clark-Heard said. “We just need to do the things that we need to do: continue to focus on defense and rebounding.”

The dominant post player Clark-Heard referred to is senior forward Brittany Winborne. Winborne is averaging a near double-double for UAB with 9.7 points and 9.9 rebounds per game.

The Blazers’ backcourt features two guards, Deanna Kuzmanic and Chelsee Black, who should provide a nice challenge to WKU’s tandem of guards in Kendall Noble and Tashia Brown.

“They are a really good team, and they are really good defensively,” Noble said. “They play hard and they have a pretty good record in conference play, so that will be good for us.”

The Blue Raiders are just two games back of  WKU in the conference standings and will look to avenge last season’s 2-point loss to the Lady Toppers in Diddle Arena.

“Middle [Tennessee] is always a good game, and they have a good team this year,” Noble said. “It will be a great atmosphere to play in.”

Even after coming off the first triple-double in WKU women’s history last Saturday against Charlotte, Noble knows there’s more to accomplish.

“We just can’t get satisfied,” she said. “We know that we have to get better every single day. We can’t focus on what everyone else is doing. We have to focus on ourselves and keep in every day to go to work.”

There was a sense of uncertainty surrounding Clark-Heard’s team going into the season because of the team’s youth and lack of experience.

However, there is anything but doubt now, and Clark-Heard embraces the pressure as the Lady Toppers ride a 13-game winning streak tied for first in the C-USA standings.

“To be able to go into somewhere where everyone knows who you are and to be a top program in this league is something that we all want,” Clark-Heard said. “I don’t think that’s anything that the newcomers didn’t expect because when we recruited them, those are the things that we talked to them about. We are just looking to competing every day and just trying to be the best that we can be.”