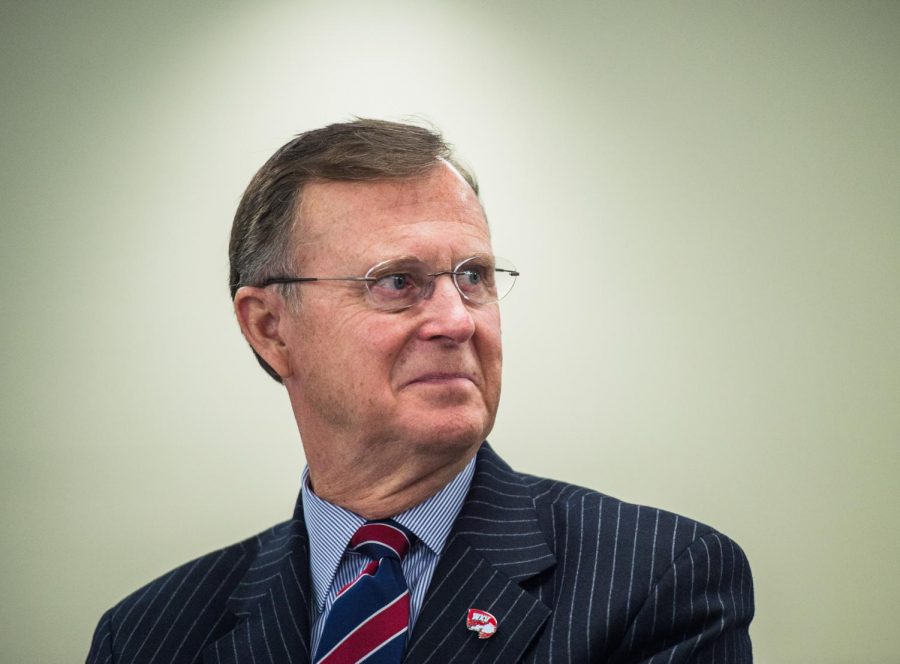 WKU president Gary Ransdell announced his resignation of presidency at the Regents Board meeting at the College & Career Center on WKU's Elizabethtown campus on January 29, 2016. Ransdell's retirement from his presidency will be effective June 30, 2017. Emily Kask/HERALD

President Gary Ransdell announced his retirement effective June 30, 2017 at the Board of Regents meeting in Elizabethtown on Friday. Ransdell has served as WKU’s president since Sept. 12, 1997.

“Tough decisions need to be made and I want to assure everyone that I’m all in,” Ransdell said.

In an e-mail sent to faculty and staff on Friday, Ransdell announced he will give the Board of Regents 17 months to conduct a search for a new president. He will then begin a six-month sabbatical leave from July 1 to December 31, 2017, ending his employment at WKU.

Ransdell said the decision was an emotional one, but added that there was a lot of work to be done at WKU over the next 17 months. He said he can now turn 100 percent of his attention to the challenges ahead of the university and all that needs to be achieved in the coming months.

The announcement comes after Kentucky Gov. Matt Bevin’s budget address on Tuesday in which he proposed a 9% cut in WKU’s state appropriation over the next two years. Bevin will also issue an immediate 4.5% cut to WKU’s state-appropriated allocation.

“I intend to give all I have to the Kentucky General Assembly this spring in defense of higher education in general and WKU specifically,” Ransdell said in the email. “I intend to spend whatever political capital I may have built up over the years in pursuit of what higher education needs in both dollars and knowledge of our values.”

Ransdell said that one of the largest challenges for his successor will be the new financial dynamic they will have to face given the recent cut in postsecondary higher education.

“My successor’s challenge will be to lead WKU in the penetration of a performance funding pool of money,” he said.

Ransdell was first hired at WKU in 1974 as a field representative in the Office of University School Relations. He spent two years there before assuming the role of associate director of Alumni Affairs in 1978, according to his official bio on WKU’s website.  Ransdell spent time in various administrative roles at Southern Methodist University and Clemson University before returning to WKU in 1997.

During Ransdell’s presidency, two capital fundraising campaigns raised over $304 million dollars in gifts and pledges for the university. Growth of the university has taken place not only through the construction of new academic buildings such as Mass Media and Technology Hall, Gary A. Ransdell Hall and the new Honors College and International Center but also through expanding international programs, including the establishment of the Confucius Institute.

Other major changes on campus include the renovation of Downing Student Union and expansion and remodeling of athletics facilities including Smith Stadium and Diddle Arena.

Ransdell also oversaw the creation of a number of new programs including four additional doctoral programs, several degree programs, the Gatton Academy of Mathematics and Science and the Honors College, the only independent Honors program in the state.

However, he said the biggest change he was able to usher in was the way WKU viewed itself as a university from thinking not just regionally but globally.

“This leading American university with international reach is no longer a vision, that’s a reality that’s driving our decision,” Ransdell said. “In my opinion, our business in the future and my successor’s challenge will be to sustain that. But our attitude and how we view ourselves has changed dramatically, and we are now a global institution.”

Ransdell said he and his wife Julie had been talking about the decision for the past several months, but wanted to go out with a good sense of timing and on positive circumstances.

“There are other things we want to do in life and I have no idea what they are right now, but we’ll have plenty of time to contemplate that in whatever that next chapters holds for us,” Ransdell said.