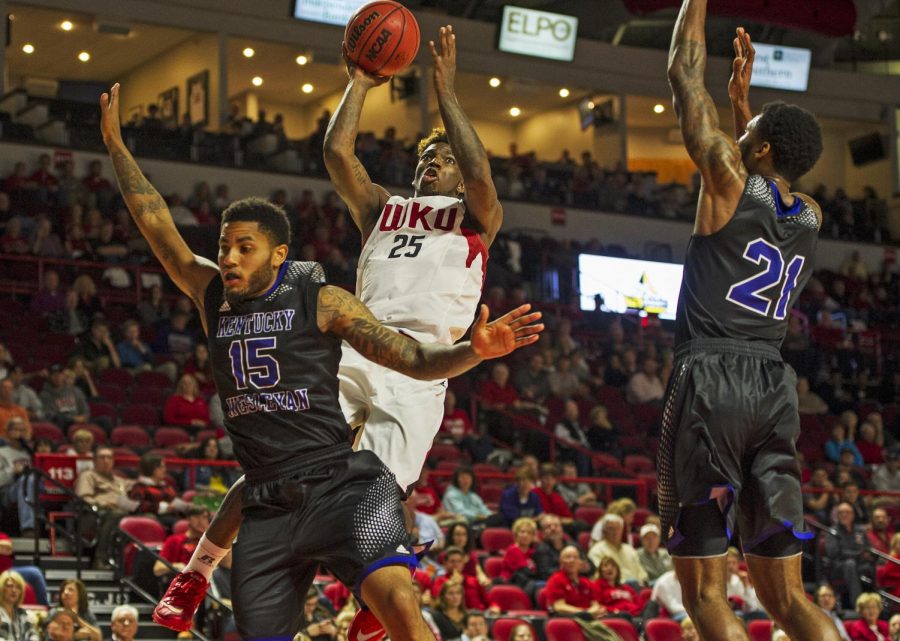 The WKU men’s basketball team (10-10) headed to Charlotte, North Carolina on Saturday to take on the 49ers (6-13) in the last leg of their four-game, 3,400 mile road trip. The 49ers took advantage of a number of costly WKU turnovers and poor transition defense to hand the Hilltoppers their tenth loss of the season, defeating WKU 88-71.

Charlotte opened the game with a 10-4 run to set the tone for the rest of the game where they led for 38 minutes and 10 seconds.

“We had too many defensive breakdowns, just some mental mistakes,” Head Coach Ray Harper said in a post game radio interview. “Defensively we’ve just got to be better.”

WKU would go down by as many as 12 points in the first half, but finished the half on a 9-0 run to get the deficit to three at halftime 35-32.

Coming out of the break, sophomore forward Justin Johnson scored the first two points to cut the Charlotte lead to just one, but Charlotte guards Jon Davis and Braxton Ogbueze turned up the intensity for the 49ers as Charlotte went on an 11-4 run to go up 48-40.

Charlotte managed to go up 25 points over WKU with 2:29 remaining in the game.

WKU had three players finish in double figures. Johnson led the way in scoring for the Toppers with 21 points. He also came away with six rebounds.

Senior forward Nigel Snipes had 12 points in the losing effort as junior guard Fredrick Edmond had a spectacular night finishing with a double-double. The junior college transfer was 8-15 from the field, good for 18 points while also grabbing a game-high 14 rebounds.

“I thought Fred Edmond played about as well as he could play,” Harper said in the post game radio interview. “He gave us about everything he could.”

The rest of the Hilltoppers shot only 6 of 21 from the field, scoring just 20 points.

Charlotte forced the Toppers to turn the ball over 13 times which lead to 20 points for the 49ers.

The 49ers finished with 19 fast break points compared to the none from the Hilltoppers.

WKU finished the long road trip 1-3, falling to 2-5 in Conference USA play. The Tops have a tough week ahead as they come back home to Diddle Arena to take on first place University of Alabama-Birmingham (16-3) on Thursday at 6:30 p.m. and then long-time rival Middle Tennessee (13-5) on Saturday.

Be sure to look for a preview of the two big games WKU has ahead in the Herald on Thursday.